Chart Industries (NYSE:GTLS) reported second-quarter results on July 18 and continued to deliver big order growth and improving profitability from nearly every part of its business. If you factor in the boost Chart received from a number of strategic acquisitions, along with divesting some of its non-core businesses, Chart appears to be laser-focused on the hottest trend in the energy sector right now -- super-cooled natural gas.

Let's take a closer look at Chart's second-quarter report, what management had to say, and what to expect going forward. 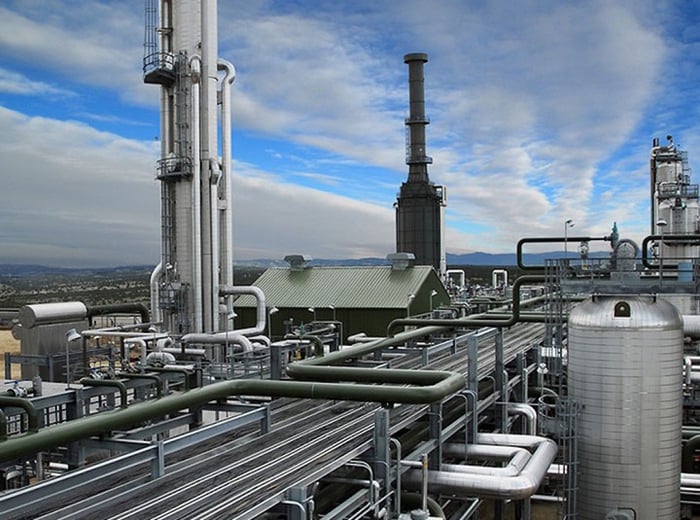 Here's how Chart finished the quarter in some key financial and operating metrics:

Chart reported double-digit revenue growth in the quarter and another small uptick in order growth. However, earnings per share grew at a slower pace than sales, up 8% on a generally accepted accounting principles (GAAP) basis.

However, a number of expenses in the quarter won't recur in the future, and management says those costs -- which are related to the company's ongoing cost-containment and profit-boosting efforts -- will pay off on the bottom line starting in the second half of the year. For this reason, Chart's adjusted, non-GAAP EPS gives us added context, and on this basis, Chart reported a big 42% jump in earnings.

CEO Jillian Evanko described an example on the earnings call, pointing out that Chart had $4.4 million in restructuring costs in the quarter that will save the company $3 million in the second half of this year and then $4.2 million annually starting in 2020. That's on top of the $3.6 million the company spent in Q1 that's expected to deliver $6.5 million in incremental annual savings. Taking expenses that pay for themselves so quickly and then adding to the bottom line in a recurring manner are no-brainers.

Acquisitions are driving growth, setting the stage for the acceleration of global LNG

Chart acquired Italy-based VRV in late 2018, and this deal is already paying dividends. The company said it has already added nine new large customers "that neither Chart nor VRV could have access [to] prior to the combination," while also finding $6 million in "revenue synergies," including simplified regional manufacturing and distribution that's expected to drive operating margins higher.

For Chart, VRV is giving it access to new markets while VRV is winning from its bigger scale as part of Chart. This business reported 6% order growth and a 9% sequential increase in its order backlog, with India, in particular, looking like a huge potential growth market for Chart as it accelerates the rollout of natural gas infrastructure across the country.

Another deal -- one of Chart's biggest so far -- closed on July 1, with the acquisition of the Air-X-Changers business from Harsco, which will add another $223 million in orders to the company's backlog.

Accelerating into the second half

Chart has gotten off to a solid start at the halfway point of 2019, but management is expecting a blowout second half. The company has earned $1.06 per share on an adjusted basis through the first two quarters but reaffirmed full-year guidance of $2.85-$3.20 per share. That works out to a 50% increase in adjusted earnings per share from 2018 -- if Chart can reach the midpoint of the range.

How's it going to reach that hefty goal? In short, by capitalizing on the burgeoning demand for equipment in the natural gas field. Moreover, this is big business: Chart said it received 15 individual orders of more than $2 million each in the quarter, more than it's ever gotten in a single quarter before, and most of them are for equipment that will be used to either liquefy natural gas or gasify liquefied natural gas (LNG).

Chart is also anticipating it will continue to win business in the natural gas arena as the year progresses, and that bidding and order activity will further accelerate as we move closer to and head into 2020. Chart listed 10 separate "Big LNG" projects alone that, when combined, would be worth more than $1 billion, all of which are set to include Chart equipment. The company also listed another 14 major global LNG projects in the works that it's in the running for.

On the gasification and storage side, Chart is also actively bidding for multiple global opportunities that can easily generate $10 million plus in Chart equipment and services per project.

Looking ahead: 2020 and beyond

Investors should be pretty optimistic that Chart says it will grow earnings by 50% this year, but 2020 is looking like a monster year for the company. Chart's June investor presentation included an updated outlook for next year, with expectations for $1.73 billion-$1.78 billion in revenue and adjusted earnings between $5.05-$5.35 per share.

Here's the rub: Those results are before including any benefit from "Big LNG" orders, three of which are likely to close and be implemented next year. When we factor that business in, Chart's revenue is expected to jump to $2 billion-$2.15 billion, and earnings are anticipated to surge to $8.00-$8.75 per share on an adjusted basis.

You read that right: Chart has a clear path to grow earnings 275% over the next year and change. Even better, Evanko said, "We also anticipate that 2020 is not the peak in this cycle" -- something that the sheer number of global LNG projects seems to back up.

Buckle up, Chart investors. There's a lot going to happen over the next few years.