This has been a good time to go public as a tech company. Some of the hottest initial public offerings of the past few months have been in the sector -- witness the steep share price climbs of Zoom (NASDAQOTH: ZOOM) and CrowdStrike Holdings (NASDAQ:CRWD), to name two notable examples.

Enterprise software specialist Dynatrace Holdings will start trading publicly on Thursday. Let's consider whether or not it has the stuff to be the next big IPO success story in tech. 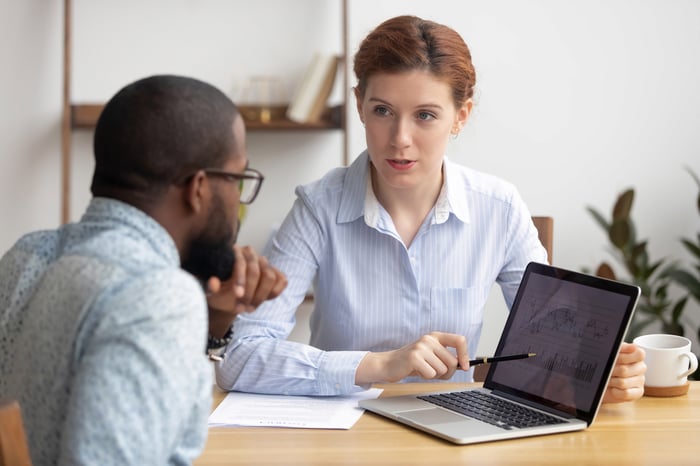 Dynatrace is an enterprise software developer. Its products help businesses evaluate the performance of their own software. Its most popular product, Dynatrace Software Intelligence Platform, is a cloud-based solution.

Dynatrace says it has over 2,300 clients including Experian, Daimler, and Samsung, spread across more than 70 countries. As of the end of March, 1,364 of these clients were users of Dynatrace Software Intelligence Platform.

For several years now, Dynatrace has been in transition between business models, moving from a classic license-based system to one relying on subscriptions.

The changeover has been relatively fast. In its fiscal 2017, 57% of the company's total revenue came from subscriptions. As of the close of its fiscal 2019 (which ended March 31), that figure had jumped to 81%. The growth rate of subscription revenue over that period was an impressive 50%.

One big expense for Dynatrace is stock-based compensation, which ballooned from around $349,000 in fiscal 2017 to over $71 million two years later. This was a key reason why in fiscal 2019, the company's bottom line flipped dramatically to a net loss of 116 million from the previous year's profit of over $9 million.

Dynatrace took out a $950 million loan in 2018, and at the end of March, its debt load stood at over $1 billion. Servicing on this debt cost it just under $70 million in 2019. It's potentially a good thing, then, that the company says it plans to use the proceeds from the IPO at least partially "to increase our capitalization and financial flexibility."

A debt pile of $1 billion is a lot to whittle down, and servicing it will be a challenge for Dynatrace. Another concern is that the company will not necessarily be the master of its own destiny. Its current major stockholder, private equity player Thoma Bravo, will still hold around a 71% stake after the IPO. It's quite possible that Thoma Bravo's interests won't run entirely parallel with those of Dynatrace and its other shareholders.

Neither CrowdStrike nor Zoom, the two high-flying 2019 tech IPOs I mentioned earlier, had a majority stakeholder. Although this was not the only reason their share prices rose so steeply, I feel it added to the general market bullishness about their prospects.

Looking at more positive aspects, I think shifting from a license-based business model to one leaning on subscriptions is a clever, if not particularly novel, choice for Dynatrace. The company seems to be experiencing some growing pains, though, so perhaps revenue growth will advance in the later stages of the transformation.

I also like that it refuses to skimp on research and development. This is a crucial cost item for a bleeding-edge software developer, and this one fully supports it. Dynatrace's fiscal 2019 R&D expenses were 45% higher than those of 2017, a growth rate that comes in a bit under the pace at which subscription revenue has expanded.

Finally, its products get high marks from users and other reviewers, and the company has considerable global reach. This matters in a world where businesses should increasingly want and need the insights Dynatrace's software can provide.

So could Dynatrace become the next CrowdStrike or Zoom-like tech IPO rock star? In my view, its ownership structure and costs will hold it back from such popularity, not to mention the fact that its business model is in flux. The company has good growth potential, but those drags might limit its shares upside.

Just under 35.6 million shares of Dynatrace will be sold in the Aug. 1 IPO, at a price of $11 to $13 per share. The company will be listed on the NYSE under the ticker symbol DL.