Nevada has been one of the hottest markets for cannabis in the entire country. Sales in excess of $50 million have been the norm for the state, and one company that has been a dominant force there is Planet 13 Holdings (OTC:PLNH.F). Last week, the cannabis producer released its quarterly earnings, which continued to show strong growth.

During the past three months, the company has generated $16.5 million in sales, which is 9.5% of the $174.6 million that the state has generated in cannabis revenue during that same period. Planet 13's dominance in the state has been rising in recent months:

Why Planet 13 has been so dominant

Unlike many other cannabis producers that have been looking to expand into as many areas as possible as quickly as possible, Planet 13 has taken a more focused approach, aiming to make its SuperStore in Nevada a premier cannabis location. In the earnings release, the company's co-CEO, Larry Scheffler, highlighted some of the things consumers can expect:

Our Phase II expansion is progressing at full speed with the goal of opening at the end of Q3. Phase II which includes a 15,000 sq. ft. customer facing production facility, a restaurant, a coffee shop, and event space will build on Planet 13's leading position in Las Vegas by creating an experience no other dispensary can offer. 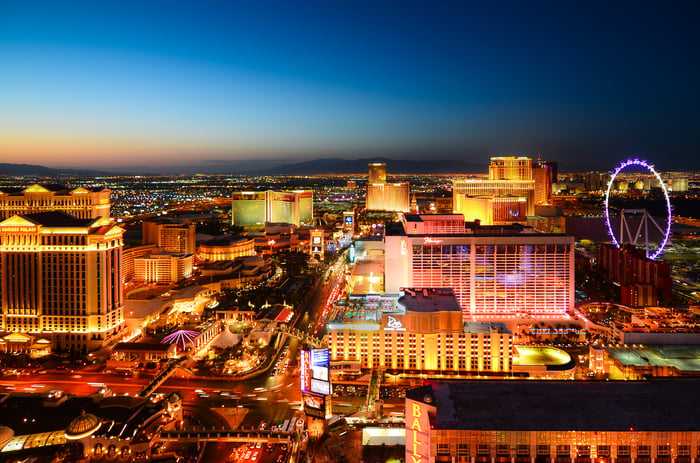 Planet 13's vision is to differentiate itself from rivals by creating much more than just a dispensary. Tourism has been a big part of the company's success, with Scheffler noting that close to 80% of the store's visitors have come from outside the state.

Numbers are getting stronger all around

One of the benefits of the company's measured growth strategy is that unlike rival cannabis companies that have been very aggressive in their expansion, Planet 13 doesn't have to try and manage many different locations across the country and can instead focus on its SuperStore location and making it as efficient and cost-effective as possible. This has helped it to keep its costs under control and not incur significant losses. While it's great to see that revenues have nearly quadrupled from $4.4 million to $16.5 million, what's even better is that the company has been able to achieve those results while also posting a stronger bottom line. In Q2, Planet 13's net loss of $1 million was a significant improvement over the $6.9 million loss it incurred a year ago. Adjusted EBITDA of $2.7 million was also significantly higher from $505,000 a year ago.

Planet 13's stock has risen 65% through the first eight months of 2019, and it could have even more room to run given these strong results. There are many reasons to be excited about where the company is headed, especially as it looks not only to expand its SuperStore location but to expand into California as well. Earlier this year, Planet 13 announced it had acquired a dispensary in Santa Ana that like the Las Vegas location, will attract many tourists, being strategically located near Disneyland. The 40,000 square foot location is expected to be one of the largest dispensaries in the world.