Organizational consulting and executive placement enterprise Korn Ferry (NYSE:KFY) found itself in a familiar position after releasing fiscal first-quarter 2020 results on Thursday, Sept. 5, after the market close. Though the company posted solid results that fell within previously issued guidance, shareholders trimmed its share price, mirroring the previous sequential quarter. Again, a cautious earnings outlook was to blame, and Korn Ferry stock lost nearly 7% in the Friday session. As we sift through details of the last three months below, note that all comparative numbers are presented against those of the prior-year quarter.

Data source: Korn Ferry. N/A = not applicable; difference too great to be meaningful.

What happened at Korn Ferry this quarter? 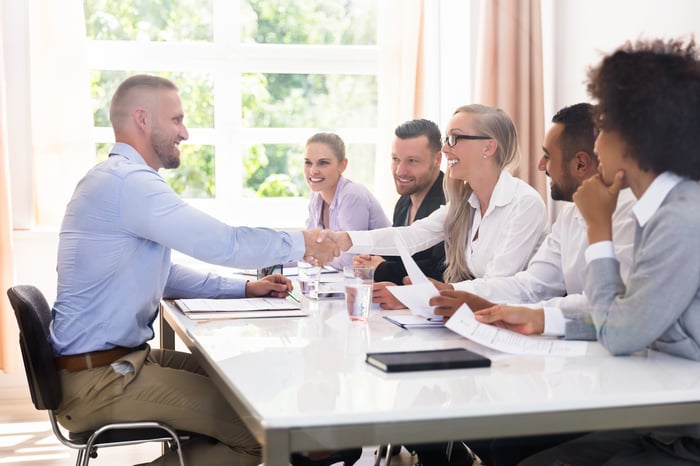 Pressured by a lack of vigorous growth due to external headwinds (which we'll discuss briefly below), Korn Ferry shares have lost roughly 3% year to date. Despite the near-term compression in stock price, management is optimistic that the company can expand revenue emphatically in the coming years. Korn Ferry aims to supplement its core executive search and advisory services with content and other offerings that leverage its intellectual property as well as its business optimization knowledge. During management's earnings conference call, CEO Gary Burnison provided detail on diversification efforts, including one of Korn Ferry's newest revenue streams:

I also look at opportunities like KF Advance, which is a business that we've basically just started, but it entails offering career advice to professionals. In a very, very short time, we've gone [from] kind of asking "Could we do this?" to [launching] a full-fledged offering with 82,000 professionals who are benefiting from, to date, about 11,000 coaching sessions. And I think we're building the world's career gymnasium for people to exercise their career fitness.

Korn Ferry's management issued a subdued earnings framework for the second quarter of 2020. The company expects fee revenue to land between $485 million and $505 million, which, at the midpoint of the band, will merely equal the $495 million in fee revenue booked in the second quarter of fiscal 2019. Similarly, at the midpoint of the range, anticipated Q2 2020 diluted EPS of $0.76 to $0.84 will barely match Q2 2019's $0.81 diluted EPS.

Notwithstanding a cloudy few months ahead, opportunistic investors may see a "green" lining in this narrative. Korn Ferry's stock price stagnation and middling earnings growth have resulted in an appealing valuation multiple for an essentially stable and successful small-cap services company: It's now trading at just 10 times forward one-year earnings. Indeed, some appear to believe that Korn Ferry can currently be acquired on sale: Shares began to stage a recovery on Monday, having risen 4.5% by early afternoon.