On top of that, Facebook recently raised its pricing, although Workplace still doesn't command the same prices as Slack. It also announced new ways to use its Portal devices with Workplace to generate a second revenue stream for the small, but fast-growing operation. 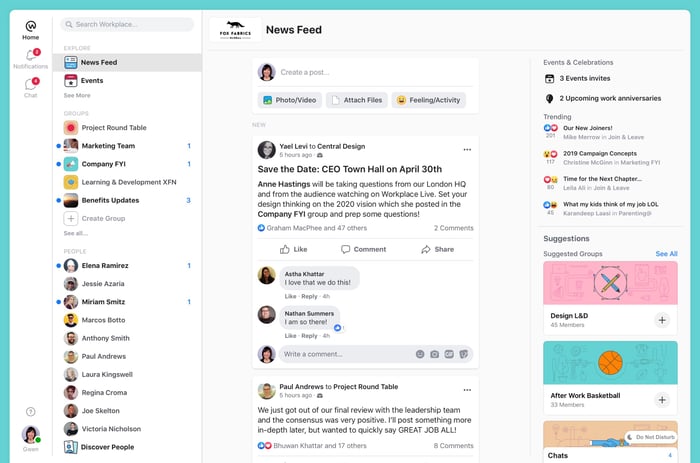 Slack announced it has over 100,000 paid customers as of the end of its second quarter. Those customers generated $145 million in revenue for the period.

Slack commands much higher pricing. Its minimum price per user is $6.67 per month and goes up to $15 per user per month. Microsoft (NASDAQ:MSFT) charges even more for its collaboration software, Teams, although its premium subscriptions also include access to its Office software suite.

Some back-of-the-envelope math says Workplace has close to half the number of paid users as Slack. But it's charging companies much less, on average, than Slack.

That pricing gap isn't necessarily a bad thing. Slack has a strong brand and a singular focus on delivering a collaboration app. Its ability to charge a premium is a necessary part of its business. For Facebook, it can afford to offer a more attractive price point to attract enterprises thanks to its massive consumer-focused business.

That strategy appears to be paying off for Facebook, as it's grown paid users 50% over the last eight months. That compares to the 58% year-over-year revenue increase Slack produced last quarter.

Alongside its user milestone announcement, Facebook also unveiled multiple new features coming to Workplace. Several features focus on video, including video-call integration with Facebook's Portal devices. Facebook's Portal features a camera and monitor that automatically pans and zooms on users to keep them in frame. Additionally, Facebook will automatically add captions to videos and translate those captions into 14 different languages. It's also using peer-to-peer technology to improve video quality in low-bandwidth environments.

The focus on video could open a new market for Facebook's Portal devices. CEO Mark Zuckerberg said Portal sales were better than he expected during the company's fourth-quarter earnings call in January. The enterprise market represents a significant opportunity to expand sales with a focus on video conferencing. Portal costs just a fraction of enterprise-level video conferencing hardware, and it could prove suitable for companies that are invested in the Workplace ecosystem.

Workplace could provide a nice avenue for Facebook to grow Portal sales. Additionally, it could work as a lock-in for customers. Not only would a business have to migrate its collaboration platform to leave Workplace, it'll also need a new videoconferencing solution. Microsoft's ability to bundle Teams with its Office suite has led to a similar lock-in and enabled it to grow the product very quickly.

Combine Workplace's rapidly growing customer base, rising subscription rates, and a path to additional revenue and a lock-in mechanism, and Facebook is on a path to catching up with Slack.

It's still a minuscule part of the company's overall business, which generated nearly $17 billion in the second quarter, but its fast growth and recurring revenue model make it valuable. For reference, Slack's market cap is around $14 billion. That's not insignificant, even compared to Facebook's $500 billion valuation.