Please ensure Javascript is enabled for purposes of website accessibility
Log In Help Join The Motley Fool
Free Article Join Over 1 Million Premium Members And Get More In-Depth Stock Guidance and Research
By Scott Levine - Oct 10, 2019 at 10:19AM

As summer ended, shares of this fuel-cell leader remained hot.

Reversing course from an August in which they dipped nearly 2% -- a rare monthly decline in 2019 -- shares of Plug Power (PLUG 6.49%), a global leader in fuel cell solutions, climbed more than 21% last month, according to data from S&P Global Market Intelligence. While investors responded to news that the company is expanding its operations through the opening of a new facility in upstate New York, the greatest source of excitement was management's optimistic five-year outlook.

In an early September announcement, Plug Power revealed the opening of a new facility that complements the February opening of a separate new manufacturing facility. In addition to providing additional capabilities for research and development, "the new labs come equipped with cutting-edge technology and ample resources supporting Plug Power's ongoing efforts to reduce costs, improve durability, and develop new materials for its proprietary membrane electrode assembly (MEAs) technology," according to the company's press release. Considering the company has failed to reach sustained profitability, it's understandable why the suggestion of reducing costs could spur investors to pick up shares. 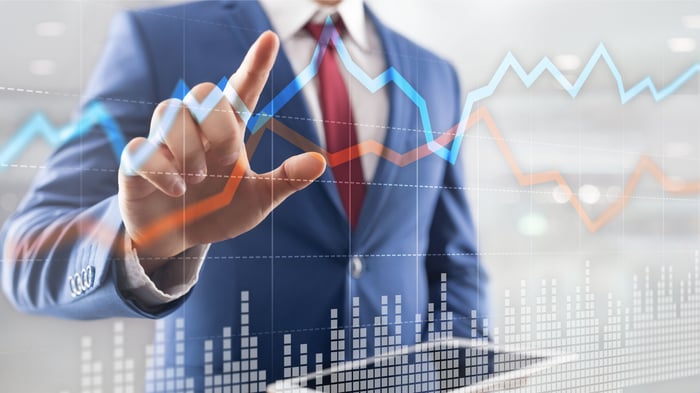 The more significant catalyst last month, however, came in the form of management's ambitious five-year outlook. For one, the company expects sales to reach $1 billion in 2024. Should the company achieve this target, it will represent a compound annual growth rate of 34% from the $175 million in revenue that the company reported in 2018.

While the anticipated top-line growth is eye raising, management's expectation of how profits will rise over the next few years is even more noteworthy. In 2024, the company forecasts Plug Power will report adjusted earnings before interest, taxes, depreciation, and amortization (EBITDA) of $200 million, for example.

How significant is this figure? Consider the following: Plug Power reported adjusted EBITDA losses of $32.8 million and $17.5 million in 2017 and 2018, respectively.

While news of Plug Power's new facility signaled to shareholders that the company is making progress in developing its MEA technology, the five-year forecast represented the greater source of encouragement. In light of the company's track record of over promising and under delivering, however, a healthy dose of skepticism is warranted, and investors should closely monitor the upcoming Q3 and Q4 earnings reports to see how well the company fares in meeting its 2019 targets of positive adjusted EBITDA and gross billings of approximately $240 million.

In the meantime, there are plenty of other renewable energy opportunities awaiting investors looking to shade their portfolios with a more greenish hue.