Shares of midstream energy infrastructure company SemGroup (NYSE:SEMG) shot 84.4% higher in September, according to data provided by S&P Global Market Intelligence. The move was the result of a merger agreement with midstream heavyweight Energy Transfer (NYSE:ET), which offered a whopping 65% premium to SemGroup's shares.

Unfortunately, even that big boost didn't turn SemGroup into a winner for most of its shareholders. The company's shares had been trending lower and lower this year, so the big September jump only puts shares up by 15.5% so far in 2019. Over the longer term, things are even worse: SemGroup shares have lost 78.1% of their value over the last five years, and 43.2% of their value since the company went public in 2010. 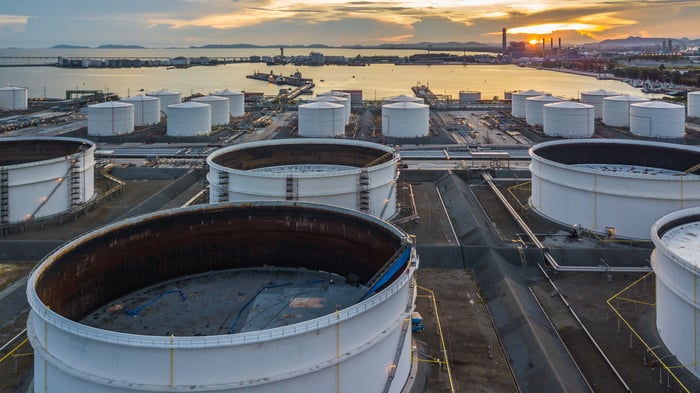 SemGroup's Houston terminal is one of its top assets. Image source: Getty Images.

With its depressed stock price, SemGroup was in bargain-basement territory and ripe for a takeover. The company had a few far-flung assets in the central U.S.'s DJ Basin and North Dakota's Bakken Shale, plus some Western Canada assets. Prior to the big jump in share price, its market cap was only about $800 million, compared to $32.4 billion for Energy Transfer.

For SemGroup, which had been floundering, the deal is probably the best possible outcome. It hasn't gotten any easier to be a small fish in a big pond: Being swallowed up was preferable to going under.

Shareholders of SemGroup have a choice: They can sell their shares for the current price of about $15.90, or hang onto them until the deal closes and receive $6.80 per share in cash and the very specific 0.7275 shares of Energy Transfer (current value: about $10) for each of their SemGroup shares.

The deal is expected to close relatively quickly, "by late 2019 or early 2020," according to a SemGroup press release. With such a fast anticipated turnaround, it's probably worth it for SemGroup shareholders to hang onto their shares. Energy Transfer is a solid midstream energy company and a decent substitute for SemGroup in a diversified portfolio.