Zillow Group (NASDAQ:Z) (NASDAQ:ZG) reports its third-quarter results after the market closes on Thursday, and questions are swirling about the massive transformations the company is undergoing. Given the stock price volatility over the last several months, market participants don't appear to have a strong handle on Zillow's future or the value of the business.

Co-founder and CEO Rich Barton could provide answers to three key questions that should shed more light on Zillow's future.

What is the status of the Flex pricing test?

Zillow's core Premier Agent business makes money by selling advertising exposure and homebuyer leads to real estate agents. Agents pay upfront for these leads, and Zillow distributes leads based on how much an agent pays relative to other agents in each ZIP code. For example, if an agent spends $5,000 per month with Zillow while all Premier Agents in that ZIP code are collectively spending $100,000, the agent receives 5% of the homebuyer leads. At that point, the agent does his or her best to sell homes to those people, which generates commissions for the agent.

Zillow has been testing its new Flex pricing in select markets since October of last year. Instead of having agents pay upfront for leads, Zillow is partnering with a select group of high-performing agents by giving them the buyer leads at no upfront cost. When these buyers buy homes, Zillow receives a referral fee of up to 35% of the agent's commission. Agents benefit because they pay no upfront cost for leads and therefore face no financial risk, while Zillow should benefit by making more money.

Flex pricing seems like a potentially game-changing revenue model for Zillow. By distributing leads to only the top agents, Zillow should see more of its leads turn into transactions, which makes the leads more valuable to agents. Additionally, agents should be willing to pay more for the lower risk and higher certainty related to only having to pay Zillow when they make a commission. If Flex replaces the Premier Agent business, I expect Zillow to make a lot more money from its homebuyer traffic. The early results of the Flex testing appear positive and management has expanded testing to additional markets over the last year. 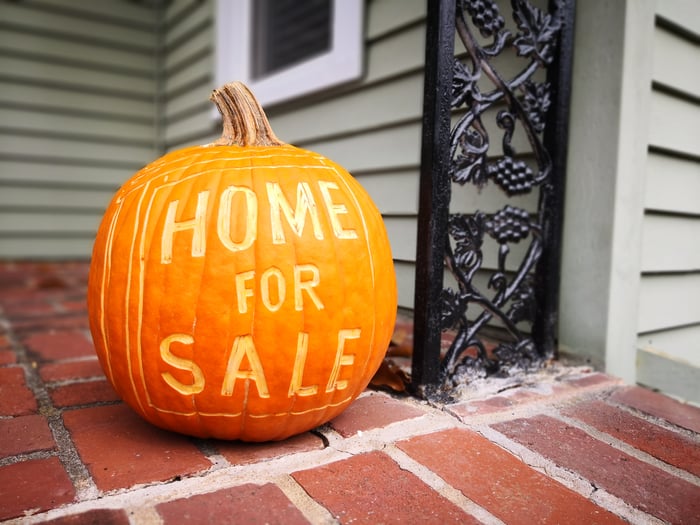 How is the rapidly growing Zillow Offers business doing?

Zillow Offers is Zillow's "iBuying" business. iBuying is a relatively new industry where large companies make offers to buy homes directly from homeowners with the intention of reselling them fairly quickly. Zillow entered this business in 2017 and the growth has been explosive. The exhibit below shows the rapid increase in the number of homes Zillow has sold by quarter since it launched Zillow Offers. How is the development of ancillary services  going?

There is skepticism that iBuying can be a good business because it requires a lot of capital and profit margins will always be low. But Zillow's management does not intend to make a lot of money on the home transaction itself. Instead, management wants to create large revenue streams from ancillary services surrounding the home transaction.

Another ancillary business is selling home seller leads to agents. Zillow is getting thousands of requests -- 69,000 last quarter alone -- from homeowners to make an offer on their home. But Zillow only buys a tiny fraction of these homes. Of the vast majority who request an offer but don't end up selling to Zillow, 45% of them end up listing their home for sale within a few months. Those future home sellers should be valuable leads that Zillow can sell to agents. There is certainly work to be done to get the user experience right, but it will be interesting to hear Barton's update on these and other nascent but promising businesses.