As healthcare costs outpace the rise in inflation, the U.S. will soon spend about 20% of the gross domestic product on healthcare. Smart investors are eyeing key healthcare stocks set to outperform in the next year.

Veeva Systems makes cloud-based software for traditional drug companies and biotech companies. It helps pharma companies manage operations, sales, and comply with industry regulations. Its industry-specific application, Vault, has an addressable market of $5 billion. Revenue from Vault is expected to grow 40% annually and its 2019 estimated revenue is $550 million.

The company reached profitability within three years, which speaks a lot about its fundamentals. Veeva has exceeded earnings expectations for the last five years, boasting an average revenue growth of 33%. It expects the annual revenue from Vault to surpass $1 billion at the end of January 2020. 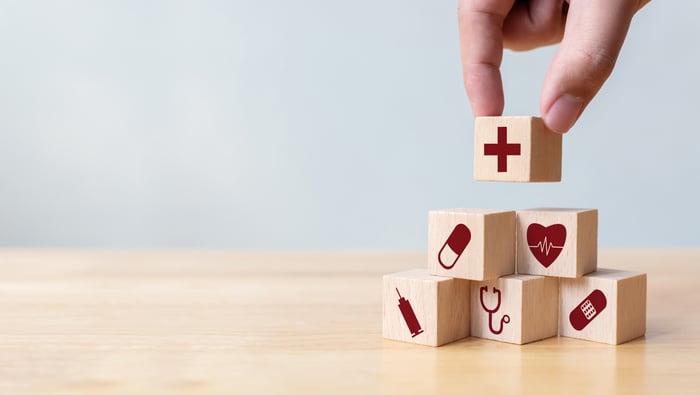 The sales are increasing fast and the gross profit margin on services sold is also improving. Total revenue for the second quarter increased 27% year over year to reach $266.9 million. The subscription services showed an increase of 28% year over year, hitting $217.3 million up from $169.6 million a year ago. Second-quarter net income showed a 58% increase year over year to $79.2 million.

It is expected that global spending on digital transformation will grow into double digits for the future. Veeva's focus on the life sciences industry has helped it expand the relationships with customers despite competition in the industry. It's safe to say the company will have a high customer base in five years' time and the sales will continue to convert to high profits over time.

Its forward P/E is 66.23 compared to the industry average P/E of 58.91. It carries a PEG ratio of 3.48, while the industry PEG ratio is more fairly valued at 2.85. These metrics clearly show the stock is trading at a premium, but investors who are willing to pay up for the price will be rewarded in the long-term.

Abbvie was spun-off from Abbott Labs (NYSE:ABT) in 2013 and it has heavily relied on its legacy Humira drug, which treats arthritis, Crohn's disease, and psoriasis. AbbVie's stock fell nearly 50% from $123.21 in January 2018, reaching a new low of $62.98 in August 2019. However, the stock jumped after the company topped the third-quarter estimates and announced a hike in dividend, now trading at $82.01. Its dividend yield is 6.44% and it declared a $1.18 dividend for the quarter, a 10.3% increase from the prior dividend.

AbbVie is diversifying away from Humira and is expected to launch about 20 new products by 2020. The company's immunology drugs, Skyrizi and Rinvoq recently received U.S. Food and Drug Administration approval. These drugs are being evaluated for Crohn's disease, ulcerative colitis, psoriatic arthritis, and atopic dermatitis. The company thinks Skyrizi could reach annual sales of $5 billion and Rinvoq could achieve yearly sales of $6.5 billion. If these revenues are achieved, the company should be able to offset the expected sales decline for Humira when it begins facing biosimilar competition. Humira sales fell by 3.7% to $4.94 billion.

In June, the company announced its plan to acquire Allergan for $63 billion. Allergan specializes in Botox and this deal will give the company a product with high sales in aesthetics, which doesn't depend on insurance reimbursement. The company is confident that Botox will continue to drive sales in the coming quarters.

Novartis is an impressive name in the healthcare industry. Considering its drug lineup, it's not surprising that investors are attracted to the stock. Its 10 revenue-producing drugs have seen a significant rise in the past quarter.

Zolgensma offers a breakthrough treatment for a muscle disorder with a price tag of $2.1 million. It recorded sales of $160 million in the quarter, exceeding analysts' estimates.  Another top-selling drug, Cosentyx, hit $937 million in quarterly revenue. The sales of Lucentis increased by 5% to reach $500 million. Further, the company released impressive clinical trial results for Kisqali, a breast cancer drug. When taken with another drug, Fulvestrant, the survival rates for patients shot up 58%. This drug could significantly increase the company's revenue over the next few years.

The company's free cash flow is $4 billion, compared to $3.2 billion in the previous year. The company has a strong future outlook considering the top drug lineup. The stock is currently trading at $86.46. It's not cheap, at a P/E of 17.17, but investors who are optimistic about its deal with Allergan would do well to buy today.

Now is the time to buy

Veeva Systems, AbbVie, and Novartis are three health stocks that can generate lucrative returns for investors in the long-run.