When it comes to the technology highfliers, investors couldn't be blamed for favoring Microsoft (NASDAQ:MSFT) over HP (NYSE:HP).

After all, HP had its turn in the spotlight nearly two decades ago. Today, Facebook, Amazon, Apple and Alphabet subsidiary Google rank higher in the minds of many investors. And Microsoft is on fire thanks to a booming cloud business.

For nostalgic investors, or those looking for an enterprise play in the tech market they may be tempted to give HP a shot even so, but Microsoft wins out over its old rival. Read on to learn why.

It's all about the cloud

It wasn't too long ago that Microsoft was written off as a fading star. Sure, it dominated the computer operating system market, but it wasn't churning out life-changing smartphones like Apple or addicting services like Facebook. But then Microsoft found the cloud and it hasn't looked back.

As it stands, Amazon is the leader in the cloud market, but Microsoft is chipping away at that dominance. It's now the second-place player globally and is growing at a faster clip than all its rivals. 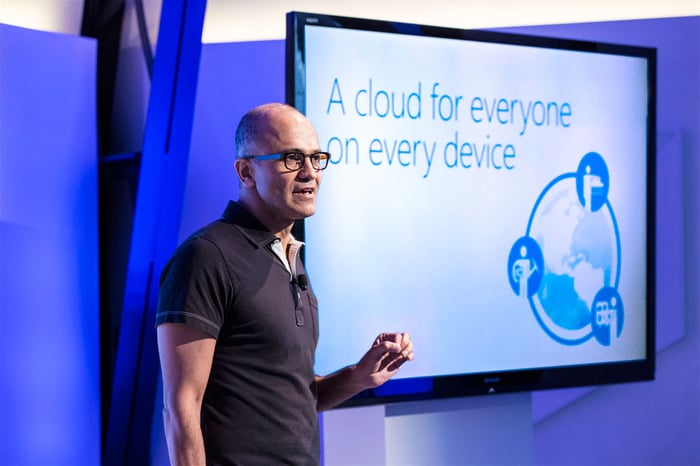 In its fiscal first quarter, Microsoft reported Azure cloud revenue growth of 59%. Overall revenue was up 13% year over year. "The world's leading companies are choosing our cloud to build their digital capability," said Satya Nadella, chief executive officer of Microsoft, when reporting quarterly results in late October. "We are accelerating our innovation across the entire tech stack to deliver new value for customers and investing in large and growing markets with expansive opportunity."

The same can't be said of HP. HP still relies on PCs, workstations, printers, and supplies for much of its revenue, and those areas are seeing a slowdown rather than an increase in growth. The PC and printer market is bloodied and bruised by the rise of smartphones and tablets. People don't need to print as much and a large portion of HP's revenue comes from those printer supplies it hawks. Start-ups have disrupted the ink business, offering ink subscription programs that have hurt HP's business.

Microsoft provides stability in a time of uncertainty

With uncertainty as to where the economy is heading and with a protracted trade war between the U.S. and China, Microsoft has emerged as a safe haven.  It's one of the reasons the stock is up more than 40% in 2019. It's seen as a defensive play with the prospect of a slowing economy looming. Lots of its revenue comes from the enterprise market which is more likely to spend in an economic slowdown than consumers. It also has a big subscription business with Office 365 and its other software in the cloud, which means recurring revenue.

HP is the opposite. It exudes uncertainty. Its CEO just left after announcing this summer he's stepping down to deal with a "family health matter." The company also recently revealed a restructuring plan that includes laying off between 7,000 and 9,000 employees.

Then there's the Xerox's (NYSE:XRX) unsolicited cash-and-stock offer for HP. HP confirmed the interest from Xerox but said it has confidence in its restructuring plan. "We have a record of taking action if there is a better path forward and will continue to act with deliberation, discipline and an eye toward what is in the best interest of all our shareholders," HP said in a statement.

HP may not have the cash to test things out or make a mark in a growing industry such as 3D printers, but Microsoft does, which is another reason it's a better bet. Not only is it pouring tons of money in its cloud businesses, but it's also trying to innovate on the hardware front.

At a recent Surface event, Microsoft teased two new foldable devices that will go sale in December of 2020. One is a foldable tablet, the other is a foldable smartphone that will run on Google's Android operating system. It's Microsoft's latest shotshot at success in the mobile phone market, something that has eluded it thus far. HP, too, has a plan for the future, but it also needs to cut costs and undergo the restructuring.

HP's stock may get a short-term boost as deal speculation with Xerox plays out, but if you're looking for the better bet over the long haul, Microsoft wins.