Virtual computing veteran VMware (NYSE:VMW) reported earnings Tuesday evening, covering the third quarter of fiscal 2020. The company beat Wall Street's estimates across the board and delivered updates on its acquisition-powered plans for the year ahead.

VMware's third-quarter results by the numbers

Among standard fare such as stock-based compensation and amortization of intangible assets, VMware's adjusted earnings backed out acquisition-related charges of $0.51 per share from this report. In the year-ago period, the same line item amounted to a benefit of $0.46 per share.

In the third quarter of fiscal 2019, the value of VMware's investment in cloud computing specialist Pivotal (NYSE:PVTL) fell by $161 million; during the same period of this year, it increased by $249 million. Between these opposing non-cash accounting items, it's easy to see how adjusted earnings came in lower even though unadjusted profits nearly doubled.

Of course, VMware triggered the rise in Pivotal's value quite directly: That stock rose nearly 60% in VMware's third quarter because VMware announced its intention to expand its investment in Pivotal from 15% to 100%. Buyout bids tend to have that effect. 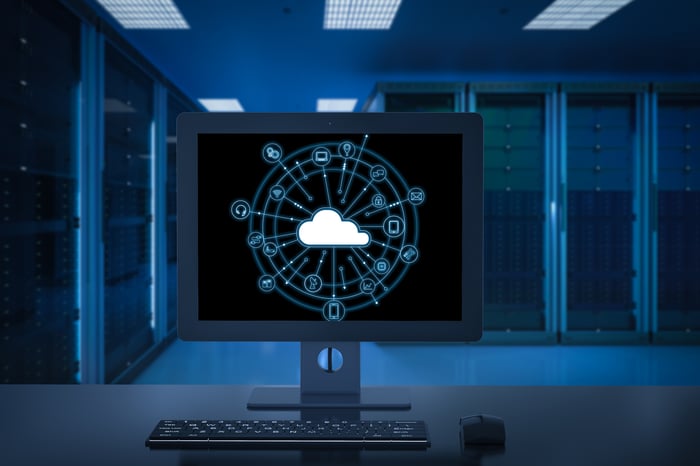 On that note, VMware expects to close the $2.7 billion Pivotal buyout by the end of the current fiscal year, meaning before the end of January 2020. Until then, the company continues to hold a 15% ownership stake in the developer of cloud-computing platforms.

Meanwhile, VMware closed another acquisition in early October. Cloud security expert Carbon Black is now a part of VMware, adding $10 million to Q3 revenue. Together, Carbon Black and Pivotal should generate more than $1 billion of additional sales in their first full year under VMware's wing, and that's high-quality subscription revenue with gross margin slightly above VMware's customary level around mid-80%.

To put that billion-dollar revenue boost from Pivotal and Carbon Black into perspective, VMware now expects to deliver roughly $10.1 billion in total sales in the current fiscal year. That would amount to year-over-year growth near 13%, consistent with the 13.3% increase seen in the previous fiscal year. Looking ahead to fiscal 2021, management expects sales growth to stay in the low double-digit area -- not accounting for contributions from Pivotal.

These buyouts were tailored to fit VMware's focus on software-as-a-service (SaaS) and hybrid cloud solutions. Subscription sales in these two categories rose by 40% year over year in the third quarter and now account for approximately 13% of the company's total revenue.

Where will VMware go from here?

Analysts were generally satisfied with VMware's third-quarter results. Several firms raised their price targets on the stock, with increases ranging from 5% to 20%.

The stock is trading at approximately 19 times free cash flow, which is quite reasonable for a company targeting 40% growth rates in the red-hot SaaS market. Given the fact that VMware is achieving double-digit growth -- and even higher rates in its chosen focus markets -- at a time of economic uncertainty on a global level, I can't wait to see how this company could perform when the geopolitical tensions settle down.