Stanley Black & Decker (NYSE:SWK) was forged via the 2010 merger of The Stanley Tool Works and Black & Decker, and in the years since, the company has continued to aggressively roll up the tool industry.

Since 2016, Stanley B&D has added the tool business of Newell Brands for $1.95 billion, the storied Craftsman brand from Sears Holdings for $900 million, and a 20% stake in outdoor power equipment manufacturer MTD Products for $234 million.

CEO James Loree has called Stanley "the consolidator of choice in the tool industry," helping the company to nearly triple sales to $13.98 billion over a 10-year period. 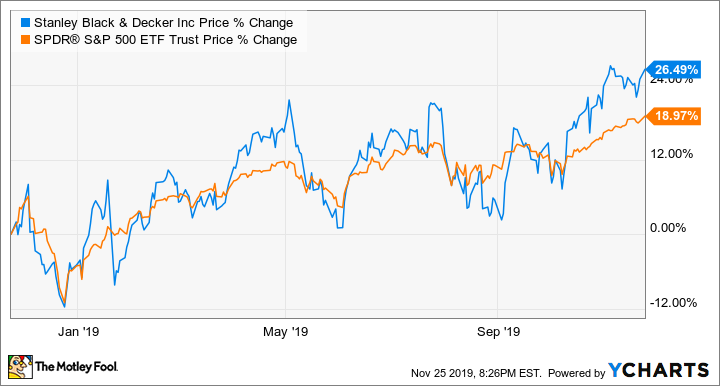 But Stanley Black & Decker is also facing an uncertain macroeconomic environment, and recent results have been impacted by strong-dollar currency woes, trade wars, and the threat of slowing global markets. Shares have seesawed between beating and losing to the S&P 500 over the past year, currently up 7 percentage points compared to the average.

Is now a good time to buy into the tool master? Here is a deep dive into where the company stands today and what the outlook is for Stanley Black & Decker.

In late October, Stanley Black & Decker followed a familiar pattern among industrial stocks, reporting third-quarter earnings that came in ahead of expectations but also warning to expect more difficult times ahead. The company reported earnings of $2.13 per share, $0.10 ahead of expectations, on revenue of $3.63 billion that fell short of consensus by about $20 million.

Stanley B&D also said it expects full-year adjusted earnings of between $8.35 and $8.45 per share, below both the consensus estimate for $8.56 per share in earnings and the company's previous guidance of $8.50 to $8.70 per share. Management said during a post-earnings call with investors that Stanley was trying to overcome about $450 million worth of "external headwinds," including "commodity inflation, currency, and tariffs." 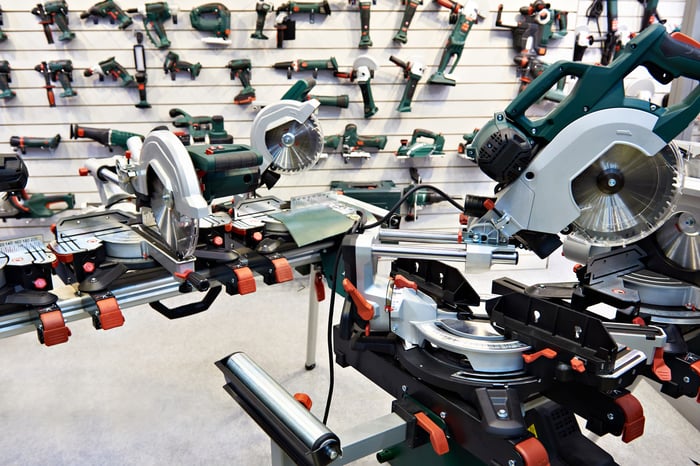 The company is trying to stay out ahead of what has become a challenging environment, announcing a cost-reduction program aimed at generating about $200 million in annual savings via head count reductions and rationalizing some of its manufacturing footprint. CFO Donald Allan said on the call that some of the work is simply accelerating internal housekeeping that had already been planned but needs to be expedited in response to market conditions.

We firmly believe we can achieve additional margin resiliency benefits in 2020 to ensure we are prepared for any potential new headwinds. This $200 million cost reduction program is a proactive response, which will allow our businesses to demonstrate a solid level of margin growth in 2020. ... We feel we have positioned the company for continued adjusted EPS and free cash flow growth next year.

The bull case for Stanley B&D

External conditions are working against the company, but Stanley Black & Decker, despite the guidance reduction, seems to be holding up pretty well. The midpoint of the lowered earnings-per-share estimate represents 3% growth year over year -- not bad in a challenging environment.

Stanley Black & Decker has rebooted the Craftsman brand, introducing new products and focusing on e-commerce, and the company believes it can grow the line from $600 million in revenue this year to $1 billion by 2021. The company's long-struggling security business has also potentially finally turned the corner, generating positive organic growth in the quarter.

In a best-case scenario for 2020, Stanley Black & Decker would benefit from a thawing of trade tensions between the U.S. and China that would lead to a rollback on tariffs and an end to the ongoing uncertainty. Commodity prices, which have eaten into 2019 results, appear to be shifting and could become a tailwind. If these external pressures were to ease, the lion's share of Stanley B&D's planned $200 million in cost savings could flow straight to the bottom line instead of offsetting profit reductions, helping to juice 2020 results.

Stanley Black & Decker has also paid down some of its debt this year, with its total debt now standing at about 25% of assets. Should market conditions not improve as quickly as the company hopes, Stanley B&D has the balance-sheet firepower to go bargain hunting in 2020 and seems likely to continue Loree's path as the consolidator of the tool business.

Is Stanley Black & Decker a buy?

Stanley Black & Decker today trades at 18 times forward earnings projections and less than 2 times sales. That seems a reasonable valuation for a company that has assembled a collection of top brands and is in the early stages of loading them onto its global distribution network. Investors also get a dividend that has increased annually for the last half century and currently offers a yield of more than 1.6%.

It's a fool's errand to try to predict when the trade wars will end or how currencies will fluctuate in the quarters to come, and I wouldn't want to predict where shares of Stanley Black & Decker will trade over the next 6 to 12 months. But for those with a long time horizon, and in particular for income-focused investors, Stanley Black & Decker offers a proven track record and an attractive portfolio of assets and brands.