Amazon has not only defined the world of e-commerce but become a leader in brick-and-mortar shopping. Here's a look at Amazon's role in the rise of the "smart" grocery store, and the companies that may pose a challenge in the space.

If asked to name Amazon's ( AMZN 0.65% ) greatest contribution to the retail landscape, most people would not hesitate in pointing to the company's pioneering role in e-commerce. It may be true that Jeff Bezos will be best remembered for his success in taking the shopping experience online, but in recent years, the billionaire entrepreneur has been pushing the envelope in the more traditional world of brick-and-mortar shopping, particularly with the Amazon Go cashier-less store.

Automation has played a role in shopping for decades. After all, what are vending machines (which have been around since the 1940s) but miniature stores entirely operated by their customers? That said, grocery stores began to really get smart in 1992 when the first self-checkout systems -- originally called "service robots" -- made their debut. 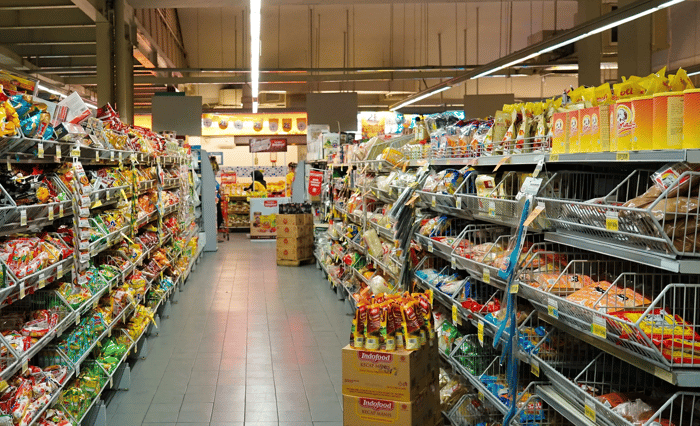 By the early 2000s, these units were a fixture in stores and supermarkets across the U.S. and farther afield. The advantages of these machines were immediately apparent. Labor costs were significantly reduced as a single employee could oversee four to six self-checkout lanes at the same time. However, the innovation came with a number of drawbacks, notably a spike in shoplifting and diminished service experience for customers. While efforts have been made since the introduction of self-service systems to amend these hiccups, it took the intervention of Amazon to bring grocery store technology to the next level.

In 2018, the tech giant opened three Amazon Go stores in its hometown of Seattle, partly as an experiment in cutting-edge retail. With their cool, polished, minimalist decor, the locations already appeared futuristic to some customers even before they noticed what was missing: any sign of a cashier or cash register or even an automated checkout lane. Instead, the stores allowed shoppers to pay entirely through their Amazon Go app, with each selected item tracked by a network of 3D cameras. Moments after a customer left, a digital receipt was delivered to the app, detailing all purchases and even the amount of time spent in the store. The novelty of the concept was best encapsulated by analyst Mark Mahaney, who referred to the experience as resembling "legal shoplifting."

The cashier-less experiment has proved to be a success so far. As of November 2019, there are 18 Amazon Go stores in the U.S. in locations stretching from San Francisco to Chicago. The hyper-efficiency of the high-tech shopping experience has been particularly praised as customers can run into an outlet, grab a couple of items, and be out in a matter of seconds. However, Amazon's trailblazing approach has not been without criticism. Concerns that a credit-based grocery store could discriminate against low-income shoppers have prompted a number of states to ban purely cashless stores. In response, the company's New York location is equipped with a traditional cash lane to alleviate these worries. Though anti-cashier-less legislation is likely to slow down Amazon's grand vision, the inexorable rise of apps and credit in place of paper money means that the company probably foresees long-term societal changes that will work in its favor.

Amazon may be leading the way in the changing face of grocery shopping, but it's not alone. While major rivals such as Walmart have yet to introduce stores as innovative as Amazon Go, a number of start-ups are taking on the Seattle giant at its own game. Among these, the most noteworthy are AiFi and Grabango, both of which are developing autonomous systems for shoppers. California-based AiFi departs from Amazon's model by specializing in cheaply made "nanostores," which resemble small shipping containers. The stores are accessible by credit card or through the company's app and work by a similar process to Amazon Go. Indeed, they resemble nothing so much as walk-in vending machines, which suggests that the smart grocery store may be coming full circle.

In short, cash may still be king for the moment when it comes to buying milk and bread on the corner store, but the push toward a fully automated future for shoppers may be too strong for any of us to resist.