Cloud-based identity-management leader Okta (NASDAQ:OKTA) keeps putting up impressive results. The company occupies one of the most promising niches in cybersecurity, and it's consolidating that fast-growing market to itself.

The third-quarter report it released last week showed its strong performance continuing, but Wall Street shrugged its shoulders in response.

Investors have sent Okta's shares on an epic run since the company went public in early 2017. The stock is up by more than 400% in that time. In light of that, the muted price action that followed the earnings release shouldn't be totally surprising, although eventually, the market will have to react if the data security outfit can keep this up. 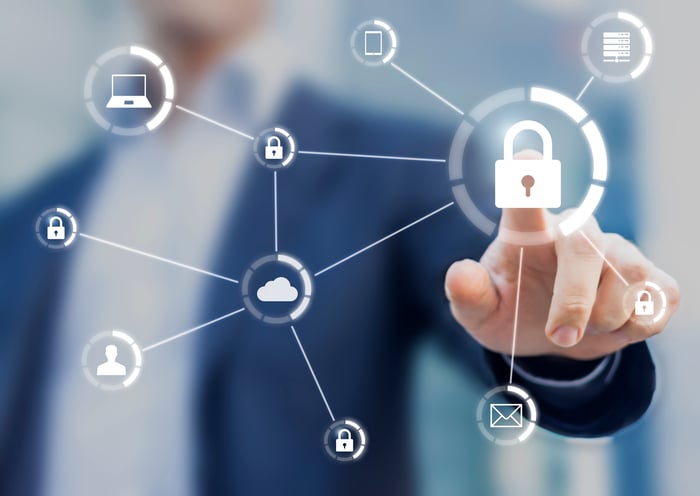 The fiscal year so far

For its fiscal 2020 third quarter, which ended Oct. 31, Okta's revenue growth came in at 45%, once again handily besting the guidance that management provided a few months prior. And as is normal for a fast-growing software company, its gross profit margin on services rendered also increased.

The one negative feature in those results -- at least for the type of investors who get skittish about young businesses that aggressively dump money into their expansion efforts -- is that Okta keeps running at a steep loss. And that's even after backing out things like the massive $89.7 million in stock-based compensation distributed to employees this year alone.

Nevertheless, for those comfortable with big operating-expense line items that still tally to a greater figure than revenue, Okta is successfully executing and bringing in hundreds of new customers every quarter. As CEO Todd McKinnon explained on the earnings call:

For a while now, we've talked about the three massive secular market tailwinds that help drive our business. First, organizations are moving to the cloud. Second, they are going through a digital transformation. And the third market tailwind is that businesses are embracing zero trust security environment. We're still in the very early stages of each of these trends, so they are going to be around for many years to come. Importantly, Okta is in a unique position to capitalize on these trends because of our ability to address the broadest set of use cases across complex IT environments.

Why the stock is taking a breather ... for now

As more organizations make the switch to updated security architectures and move to protect their new cloud-based operations and data storage, there's plenty of runway left for Okta. In fact, it raised its guidance for the fiscal year again, from a $560 million to $563 million range to a $574 million to $575 million range, good for 44% annual growth. Not bad at all.

So why the tepid reaction from investors? Much of it has to do with the company's previous share price rally, which has outpaced revenue growth over the last few years. The stock now trades for about 25 times expected 2020 sales. With profitability of any kind still a ways off, subjective sales ratios are the best metric investors can use to gauge the stock -- and a price-to-sales metric that high has to assume that Okta's close to 50% annual growth rate will be the norm for some time.

The good news is that the company has shown no signs that its growth will be easing up anytime soon. If it can maintain this pace, its share price should eventually begin heading upward again. In the meantime, this is likely to be one volatile cybersecurity stock.