The "retail apocalypse" is still a phrase that is bantered about, except that signs are everywhere that things are really going to be OK. But it's still too early to know who will emerge stronger and who will need to go through some drastic changes before they see the light at the end of the income statement.

Many retailers have suffered this year and seen their share prices decline accordingly, including L Brands (NYSE:BBWI), Macy's (NYSE:M), and Lands' End (NASDAQ:LE). Let's take a closer look at these stocks and see which ones might be worth investing in.

L Brands is the parent company of well-known retail chains Victoria's Secret, Bath and Body Works, and Pink. It used to own luxury retailer Henri Bendel before it shut down that division in 2018 due to massive losses, and it has closed down or sold off other brands.

While the company saw revenue of $2.7 billion in the third quarter of 2019, it posted a loss per share of $0.90. For the fourth quarter, which includes the holiday season, it's projecting earnings per share of $2.00. 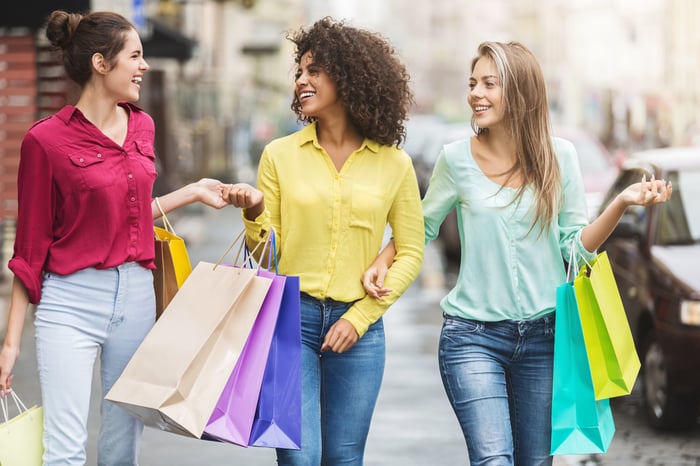 Last year, L Brands brought in a new chief executive for Victoria's Secret, which is facing declining sales, in part, due to the #MeToo movement and competition from more inclusive and diverse rivals, such as American Eagle's Aerie line and an athlete-inspired undergarment collection from lululemon athletica. The competition is hurting the company's biggest moneymaker, but Bath and Body Works (a key gift brand) is growing nicely.

L Brands has seen its brands decline before. The company got its start with The Limited, a brand that was eventually sold off, and it has acquired and sold off numerous others over the past six decades.

Macy's retailing empire, with 870 stores including Bloomingdales, Backstage, and other brands, has seen its revenue plummet lately as it has slowed its adoption of newer styles and changing retail trends. Its share price has fallen as a result and is down around 47% year-to-date.

CEO Jeff Gennette has outlined a new strategy to better integrate physical stores with digital options -- specifically mobile -- and the company is working to improve the customer experience in better-performing stores while closing poorly performing ones and slashing overall store count.

Revenue is 16% less than it was five years ago, but Macy's always performs best in the fourth and current quarter that contains the holiday shopping period. If the company gets a lift this season, it will be in a good position to see returns from its new operations.

The smallest of the retailers on this list, with a market cap of $487 million and Q3 revenue of $340 million, Lands' End has seen improved financials over several quarters and is the only company listed that is seeing better growth. So why's the stock down from its 2014 highs?

The main problem right now is its partnership with Sears, which is still getting itself together after a challenging year fighting bankruptcy. Partnering with the large chain, which has a strong physical presence, seemed like a good idea at first for the more digitally focused Lands' End, but the perceived value of the brand fell along with Sears. Pulling out of the mall locations, while a good move, has also contributed to the decline in revenue.

While shares of Lands' End are almost definitely undervalued, this small-cap stock may take time to rise, and it may need a new initiative or focus to see real gains.

Here's how the companies' stocks have performed so far this year:

Here's a comparison of year-over-year same-store sales growth over the past four quarters:

While Lands' End is pulling itself out of the retail abyss, Macy's and L Brands are falling further in. To its credit, only a year ago L Brands was seeing decent growth. But Macy's has been struggling for the past half-decade.

This is not new turf for L Brands, whose management knows how to deal with brands that need help and stay with brands that are relevant, something that has been a problem for both Macy's and Lands' End. L Brands products are also high on gift lists, which should give it a leg up this season, and makes it my pick for the retail stock to buy at a low this holiday season.