Some positive earnings results helped boost the Dow Jones Industrial Average (DJINDICES:^DJI) on Wednesday morning. The Dow was up 0.34% at 10:20 a.m. EST.

IBM (NYSE:IBM) was one company that impressed investors, beating analyst estimates across the board and predicting growth this year. Apple (NASDAQ:AAPL) stock was also up following a report that the company is planning to launch a low-cost iPhone in the coming months.

While analysts were expecting IBM to report a revenue decline for the fourth quarter, the tech giant managed to eke out some growth. Total revenue was up 0.1% year over year, and it was up 3% adjusted for currency and divestitures. IBM's revenue beat analyst expectations by $160 million, and adjusted earnings per share of $4.71 was $0.02 higher than expected. 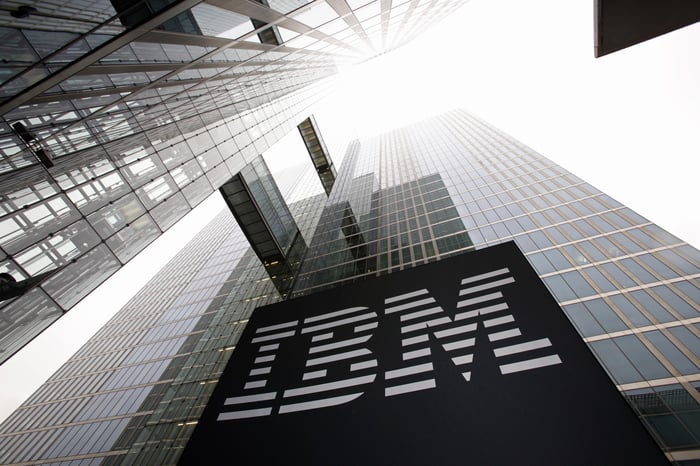 Earnings were under some pressure in the fourth quarter from the accounting treatment of the acquisition of Red Hat, and that pressure will continue into 2020. IBM was able to recognize $573 million of revenue from Red Hat in the fourth quarter, compared to the over $1 billion of revenue Red Hat would have generated as a stand-alone business. Because IBM must recognize all of Red Hat's costs, this discrepancy weighed on the bottom line.

This accounting headwind will eventually fade away, and Red Hat itself is growing swiftly. Red Hat's normalized revenue was up 24% year over year, and IBM is making progress selling Red Hat software to large clients and increasing adoption of the software it's made available on Red Hat's OpenShift platform.

If IBM's growth proves sustainable this time around, the stock could finally recover from a multiyear slump. Shares were up 3.7% Wednesday morning as the market digested the company's strong results.

The budget iPhone situation could change this year. Bloomberg reported on Wednesday that Apple suppliers were planning to start assembling a new low-cost iPhone in February. The new phone could be announced as early as March.

The new phone, which would be Apple's first budget iPhone since the iPhone SE in 2016, will reportedly look similar to the iPhone 8. However, it will feature the same fast processor as the iPhone 11, making it a substantial upgrade. While Apple's launch plans aren't known, the phone may be aimed at markets like India, where expensive iPhones have trouble competing with cheaper Android alternatives.

Later this year, Apple is expected to launch a new batch of iPhones that support 5G networking technology. While consumer interest in 5G technology is unclear, a new low-cost iPhone would provide a cheaper alternative to iPhone users wanting to upgrade but unwilling to pay up for the latest and greatest technology.

Apple is scheduled to report its fiscal first-quarter results on Jan. 28. The stock was up 0.6% Wednesday morning.