The stock market managed to bounce back somewhat from the large drops in major benchmarks on Monday. Even though fears about the outbreak of coronavirus in the Wuhan area of China aren't diminishing much, investors seem to be more optimistic that the illness will eventually be resolved. As of 11:15 a.m. EST, the Dow Jones Industrial Average (DJINDICES:^DJI) was up 201 points to 28,737. The S&P 500 (SNPINDEX:^GSPC) rose 32 points to 3,275, and the Nasdaq Composite (NASDAQINDEX:^IXIC) was higher by 111 points to 9,250.

The pressure from the coronavirus on stocks is especially evident for Chinese businesses, which are dealing with greater uncertainty than the rest of the market. That's showing up in the performance of the iShares China Large-Cap ETF (NYSEMKT:FXI). However, some stocks outside China have greater exposure to the Chinese market than you might expect, and companies like IMAX (NYSE:IMAX) could have difficulty rebounding as well.

It's not surprising to see Chinese stocks fall in light of the nation's response to the outbreak. Tens of millions of people are being told to stay home from work, with factories closed and planned celebrations for the Lunar New Year getting scaled back across the country. The government is limiting travel to try to contain the spread of the disease. Those moves will restrain economic activity across China, and the resulting weakness for the world's second-largest economy will inevitably ripple around the globe. 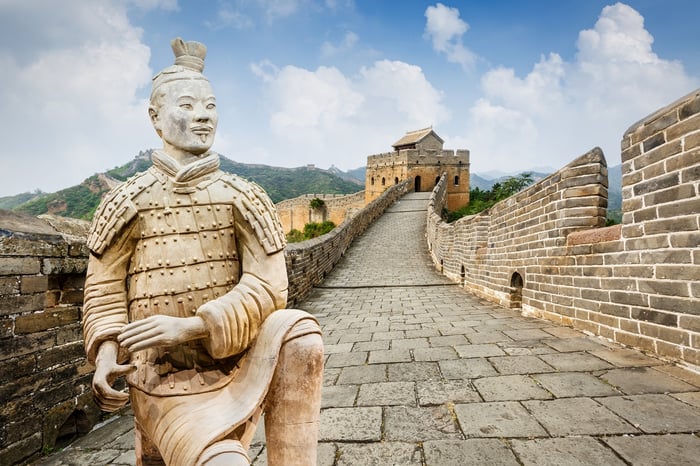 Investing in individual Chinese stocks can be intimidating for U.S. investors, and so ETFs like iShares China Large-Cap are popular. But they don't protect from downturns resulting from national concerns. The ETF fell 4% Monday, and its bounce of less than 0.5% Tuesday morning didn't reflect very much short-term optimism about the future.

ETF investors always have to understand what their funds actually own, and for iShares China Large-Cap, holdings of the top 50 companies in the Chinese market leave investors with a huge concentration in financial services and communication services stocks. With the internet playing an increasingly vital role in China, any disruption to the tech industry there could have a direct impact on the communication services stocks in the ETF and also indirectly hurt financial institutions. As a result, even if worries about the coronavirus fade, it could take a while for China ETF shares to reflect any recovery.

Somewhat more surprising to many investors was Monday's 4% drop in shares of big-screen theater operator IMAX. For U.S. movie watchers, the move might've seemed like a huge overreaction, given the limited number of reported cases of the virus domestically, and shares did rebound almost 2% Tuesday morning.

However, China has been one of IMAX's most important growth markets in recent years. Even as the U.S. movie theater industry remains under pressure from the move toward streaming video and more home-based entertainment options, IMAX's premium theater experience remains a huge draw among China's population.

With the coronavirus, however, Chinese officials are looking at shutting down places where members of the public congregate in an effort to try to stop the spread of the disease. That means potential long-term problems for IMAX theaters in the nation. Moreover, with a backlog of orders for new theater installations in China, IMAX could face pushback from those who wanted theaters but who needed to change their minds given current conditions.

Everyone hopes that the coronavirus will turn out to be much less of a big deal than currently feared. But for now, investors remain fearful, and that's something you'll need to adapt to in order to navigate market turbulence in the days and weeks ahead.