It's no secret that consumers are canceling their cable television subscriptions en masse. After estimating 5.4 million households cut the cord last year, Evercore anticipates 4.8 million will do the same in 2020.

They're doing so because they can. Streaming alternatives like Netflix (NASDAQ:NFLX) along with the so-called skinny bundles like Charter Communications' Spectrum TV Essentials, are gathering steam, while free, ad-supported on-demand video options like Tubi TV fill in the gaps for consumers.

It's a dynamic that's worked for -- and against -- satellite cable giant DISH Network (NASDAQ:DISH). Although it doesn't use cords to deliver television entertainment into homes, it's still priced like most cable services, and as such has been bleeding cable customers just like its cord-based counterparts. Conversely, its streaming platform Sling TV was one of the earlier streaming choices, and has collected more than a couple of million subscribers since its inception. DISH knew the former would struggle while the latter advanced. 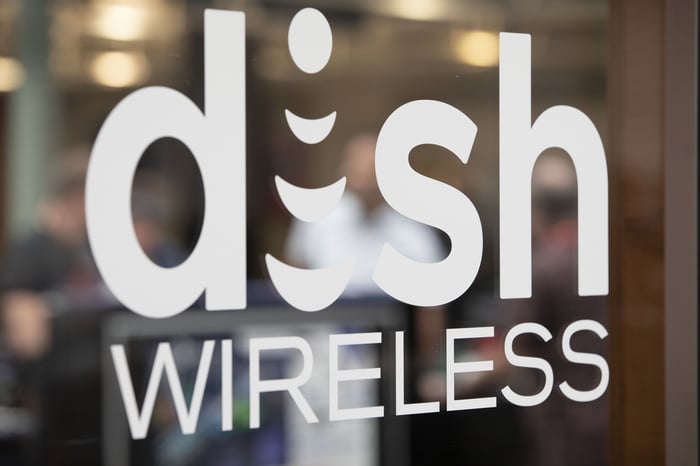 Unfortunately, Sling TV may now be on the skids too. For the first time ever, the company's own alternative to its satellite cable service lost customers. It may not be a coincidence that it happened right around the time Walt Disney (NYSE:DIS) launched Disney+ and Apple (NASDAQ: AAPL) launched Apple TV+. If the quarter in question is the shape of things to come, suddenly DISH's wireless phone service ambitions are forced to the front burner.

The tipping point for DISH?

For the three-month stretch ending in December, DISH Network turned $3.24 billion worth of revenue into a per-share profit of $0.69. The top line fell from a year-ago comparison of $3.31 billion, while the bottom line improved on the $0.64 reported in the final quarter of 2018. Both numbers were better than analysts' expectations. In that same vein, the net loss of 194,000 pay-TV customers was technically an improvement relative to the 334,000 television customers it lost in the last quarter of 2008, counting satellite and Sling TV customers together.

There was a nuance within those measures, however, that's more than a little noteworthy. Sling TV lost 94,000 paying customers, versus the 47,000 it added during the comparable quarter from a year earlier. 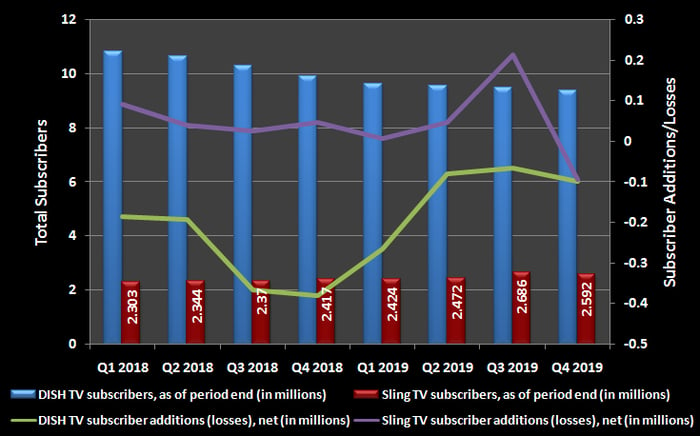 It could be a one-off -- an anomaly that won't be repeated. Given the backdrop, though, that seems unlikely. Aside from the advent of Disney+ and Apple TV+, Hulu reported that as of last quarter its skinny bundle is serving over 3 million customers, while the relatively nascent YouTube TV from Alphabet's Google has grown to more than 2 million users. DISH even conceded in its quarterly filing: "This decrease in net Sling TV subscriber additions is primarily related to increased competition, including competition from other OTT [over-the-top] service providers."

Fair enough. Just bear in mind that those competitors don't appear to be losing subscribers to their rival in Sling TV.

The new norm for Sling TV

As for why Sling TV has hit a wall here and now, the most plausible explanation is the sheer number of alternatives that have entered the market. Before last year, Netflix and Sling TV enjoyed operating in their respective arenas by themselves. Now they don't.

More importantly, these alternative streaming offerings benefit from an edge DISH Network simply doesn't have. That's the marketing firepower of a much bigger company backing these platforms. Disney and Apple are names almost everyone recognizes, and both already have established relationships with hundreds of millions of consumers. Ditto for YouTube. Sling TV, meanwhile is owned by a satellite cable name whose customers are likely already looking for a way to sever the relationship.

That's not apt to change either, which may be why DISH Network has ramped up its interest in becoming a cellphone service provider. It needs phones to help stabilize results, if not as a means of developing bundles to sell cable service and cellphone service together.

That latter endeavor isn't a terrible bet, but it's hardly a rock-solid one. Data from Comcast (NASDAQ:CMCSA) suggests bundling as a marketing approach is dying, with more and more customers choosing only one of its services, rather than two, or even three. It's also become clear that AT&T's (NYSE:T) plans to cross-sell services when it acquired DirecTV back in 2015 haven't panned out. A similar DISH phone/TV bundle isn't apt to sell particularly well either. Consumers simply have too many a la carte choices of phone services, internet services, and now, television services.

Worse before better for Sling TV and DISH

That's a long shot, though. The streaming market's throttle has just been opened up, with Comcast's NBCUniversal unit and ViacomCBS both planning launches and expansions, respectively, of streaming services this year that would also overlap with Sling TV's lineup. If DISH is going to log meaningful growth in the foreseeable future, it's going to have to do so from within the wireless business, and it's going to have to dethrone established names like AT&T and Verizon to do it. That's a tall order.