Please ensure Javascript is enabled for purposes of website accessibility
Log In Help Join The Motley Fool
Free Article Join Over 1 Million Premium Members And Get More In-Depth Stock Guidance and Research
By John Rosevear - Mar 3, 2020 at 9:57AM

Production of the ID.4 will begin later this year. 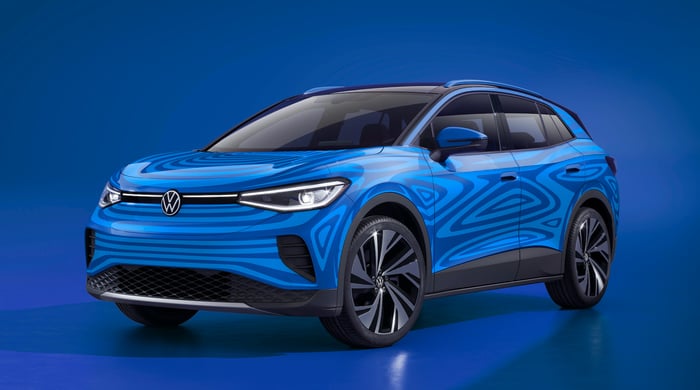 The Volkswagen ID.4, a new battery-electric crossover SUV that will be sold in the U.S., Europe, and China. Image source: Volkswagen AG.

VW brand chief Ralf Brandstatter said that the ID.4's shape is optimized for aerodynamic efficiency, enabling greater range from a given battery pack. The SUV will be offered in rear-wheel-drive and all-wheel-drive versions, with several available battery pack options offering ranges up to 500 kilometers (310 miles).

The ID.4 is the production version of the VW ID CROZZ II show vehicle, which was first presented at the International Motor Show in Frankfurt in 2017. It follows the launch of the VW ID.3, an all-electric compact hatchback for the European market.

European automakers including Volkswagen are presenting their new models online this week following the cancellation of the Geneva Motor Show due to concerns about the global COVID-19 outbreak.

Production of the ID.4 is expected to begin at Volkswagen's factory in Chattanooga, Tennessee, by the end of this year. The ID.4 will also be built at factories in Europe and China, the company said.