Please ensure Javascript is enabled for purposes of website accessibility
Log In Help Join The Motley Fool
Free Article Join Over 1 Million Premium Members And Get More In-Depth Stock Guidance and Research
By Matthew DiLallo - Mar 3, 2020 at 11:19AM

Units of MLP Plains All American Pipeline (PAA -1.22%) tumbled 17.9% in February, according to data provided by S&P Global Market Intelligence. Among the issues weighing on the pipeline company were its outlook for 2020 and more turbulence in the oil market.

Oil market conditions grew more challenging during the fourth quarter, which was evident in Plains All American's earnings report. The company's adjusted EBITDA sank 9.4% compared to the year-ago period while its distributable cash flow plunged 22.7%. However, both numbers were well ahead of its expectations, enabling the company to produce stronger-than-anticipated growth for the full year. 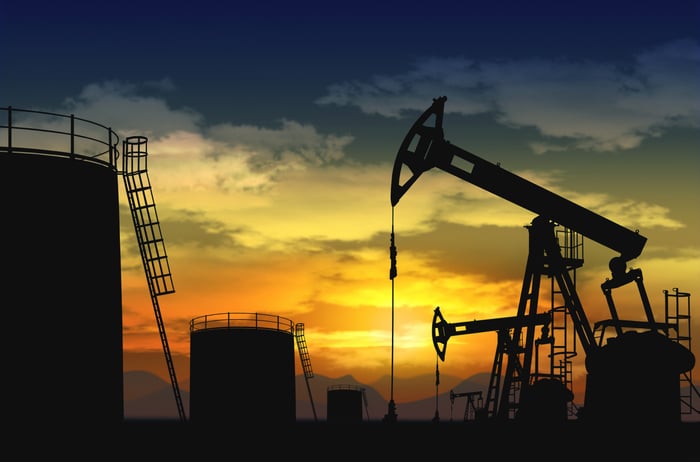 Unfortunately, the pipeline company expects weaker conditions to persist throughout 2020, which will weigh on its more market-sensitive supply and logistics business. Because of that, the company expects its EBITDA and cash flow to decline this year, though it still anticipates that it will produce enough cash to cover its high-yielding distribution by a comfortable 1.57 times. Further, it plans to sell $600 million in assets to help finance its expansion program so that it can maintain a top-notch balance sheet.

Adding more weight to Plains All American's unit price last month was a significant slump in crude oil due to the COVID-19 coronavirus outbreak. Oil prices plummeted 16% during February's final week -- its biggest weekly decline in 11 years -- pushing oil down 13% for the month. Driving that decline is the fear that the outbreak will mute demand for oil this year. If that happens, oil companies in the U.S. could cut their drilling budgets, which would result in fewer volumes flowing through Plains All American's pipeline system, impacting its cash flow.

Plains All American expected 2020 would be a transitional year as it focused on completing several pipeline expansion projects that would fuel accelerated growth in 2021. However, with crude prices crashing last month, oil companies might reduce spending, which could further impact its 2020 forecast as well as its anticipated acceleration in 2021. While that's a possibility, the company should still generate more than enough cash to cover its now 10%-yielding dividend, which is on an increasingly sustainable foundation thanks to its strengthening balance sheet.