The business models of Seagate Technology (NASDAQ:STX), the data storage company, and Intel (NASDAQ:INTC), the renowned computer chipmaker, are rooted in delivering hardware that supports the technology sector. They are not direct competitors, but both are still comparable since they must deal with similar challenges, such as soft enterprise-client spending and a decline in PC sales.

In recent years, Intel has faced new competitive pressures from Advanced Micro Devices due to Intel's struggles producing its chips. Meanwhile, Seagate has experienced cyclical slowdowns in demand for hard disc drives. As a result, is one company clearly a better buy? Let's explore each to find out. 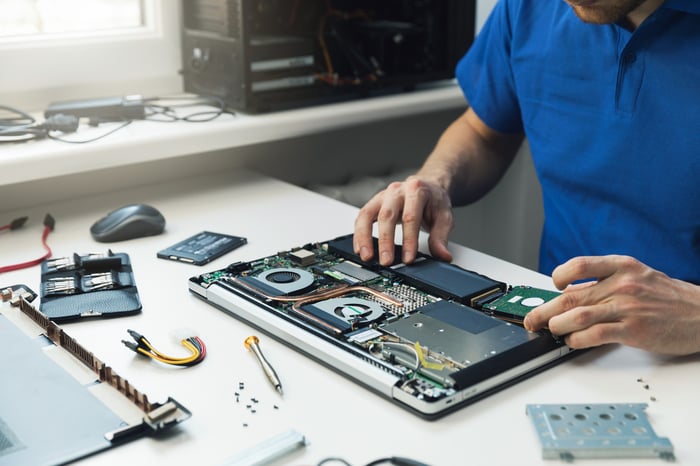 Seagate's earnings results for the fiscal 2020 second quarter (ending Jan. 3, 2020) showed year-over-year declines across the board.

However, digging into the numbers for the quarter reveals some interesting trends. CEO Dave Mosley stated on the company's earnings call that mass-capacity storage revenue jumped 25% year over year. The company shipped over 1 million units of its 16-terabyte hard drives, the largest-capacity drives available from Seagate (until it launches 18-terabyte drives later in the year).

Mosley also highlighted strong demand for Seagate's surveillance drives. This demand led to record revenue for the company's video and image applications segment. It makes sense that surveillance data-storage needs are growing given that surveillance videos are bigger files, and so require more storage space than other types of data files.

These trends are encouraging for Seagate's prospects over the coming quarters. In fact, when contrasting Q2's performance against the previous quarter, it reveals quarter-over-quarter growth across the board.

It may well be that Seagate is about to turn a corner and experience a period of revenue growth.

Intel's latest report, for the 2019 fourth quarter, was the opposite of Seagate's Q2 results. Intel enjoyed record revenue of $20.2 billion, an 8% year-over-year increase, and net income was up 33%, reaching $6.9 billion. The company also expects record revenue in 2020 with the first quarter expected to come in at $19 billion, although these estimates do not account for the effects of the coronavirus pandemic.

Intel is widely known for its processors that power PCs. But its collection of data-centric business units, such as its Internet of Things (IoT) division, saw double-digit growth across the board, and a 15% increase overall. Intel's PC-centric business used to account for the majority of the company's revenue, but thanks to record revenue from its data-centric businesses this quarter, the two sides of Intel are now neck-and-neck.

Moreover, fourth-quarter results illustrate the overall success the company experienced throughout 2019. Intel enjoyed record revenue in 2019, $16.9 billion in free cash flow, and returned $19.2 billion to shareholders in the form of dividends and stock buybacks.

Seagate and Intel are technology stocks with appealing attributes. Both pay a dividend and have made share repurchases. Also, since both are mature companies, each provides a level of stability and predictability for investors.

Although Seagate has a higher dividend yield between the two (currently 5.5% for Seagate versus 2.5% for Intel) and may be about to continue the growth it's seen in sequential quarters, the better buy is Intel. It has already established renewed success in its data-centric business, which plays in areas that are just getting started, such as self-driving cars. As a result, Intel is poised to continue growing for years to come.