Please ensure Javascript is enabled for purposes of website accessibility
Log In Help Join The Motley Fool
Free Article Join Over 1 Million Premium Members And Get More In-Depth Stock Guidance and Research
By Bram Berkowitz – May 1, 2020 at 5:16PM

The European Central Bank's move is intended to boost lending to the broader business community.

The European Central Bank (ECB) will now essentially pay banks to lend out money by offering them financing at a negative interest rate.

The ECB announced Thursday it was creating a new targeted lending facility that will provide approximately 3 trillion euros ($3.3 trillion) in liquidity to banks at rates as low as negative 1%, so long as the money they borrow gets passed on via loans to businesses and consumers.

The decision came after the ECB ran scenarios and projections that showed that GDP in the Eurozone could shrink by as much as 12% in 2020. 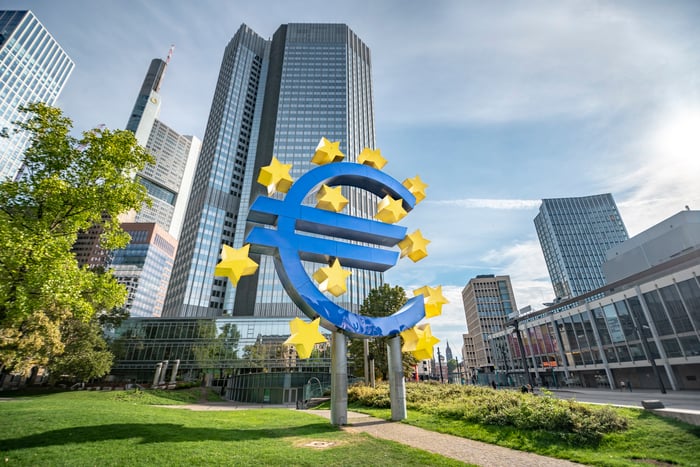 The move also came after ECB President Christine Lagarde said during a press conference that the institution has noticed a tightening of credit to businesses, despite an increase in demand. The annual growth rate for loans to non-financial corporations stood at 5.4% in March, up from 3% in February, she said. .

"Our policy measures, in particular the more favourable terms for TLTRO III operations and the collateral easing measures, should encourage banks to extend loans to all private sector entities," Lagarde added. "Together with the credit support measures adopted by national governments and European institutions, they support ongoing access to financing, including for those most affected by the ramifications of the coronavirus pandemic."

To be clear, the ECB did not cut its benchmark interest rates any further. The base interest rate remained at 0%, while the marginal lending rate that banks pay to borrow from the ECB overnight remained at 0.25%.

The bank's deposit rate, which determines the interest banks receive for depositing money with the central bank overnight, remained at -0.5%, but this rate has been negative since June 2014.

The ECB also announced a new lending program called the pandemic emergency longer-term refinancing operations (PELTRO), the purpose of which is to assist with any liquidity crunches in the short-term funding markets.