Please ensure Javascript is enabled for purposes of website accessibility
Log In Help Join The Motley Fool
Free Article Join Over 1 Million Premium Members And Get More In-Depth Stock Guidance and Research
By Anders Bylund – May 4, 2020 at 4:06PM

The House of Mouse is bringing in some big guns for the next silver-screen title and Disney+ series, despite a relatively lukewarm reception for "The Last Jedi."

Walt Disney (DIS -0.75%) is making more content in the Star Wars universe. The award-winning talent Disney is bringing to a new theatrical release and Disney+ series might surprise you.

Disney has tapped Oscar-winning writer and director Taika Waititi to helm and co-write a new silver-screen release in a galaxy far, far away. The sparse announcement was made on Star Wars Day 2020 ("May the Fourth be with you").

The movie doesn't have a name yet and we don't know where in the timeline of the Star Wars canon this title will fall, but Waititi's presence points to an action-packed plot with a healthy dose of slapstick comedy. He won an Academy Award for co-writing the screenplay to Jojo Rabbit, the best World War II comedy since Roberto Benigni's Life Is Beautiful (1997).

Co-writer Krysty Wilson-Cairns also comes with a nomination from last year's Academy Awards, losing to Waititi's work as a co-writer on World War I drama 1917. 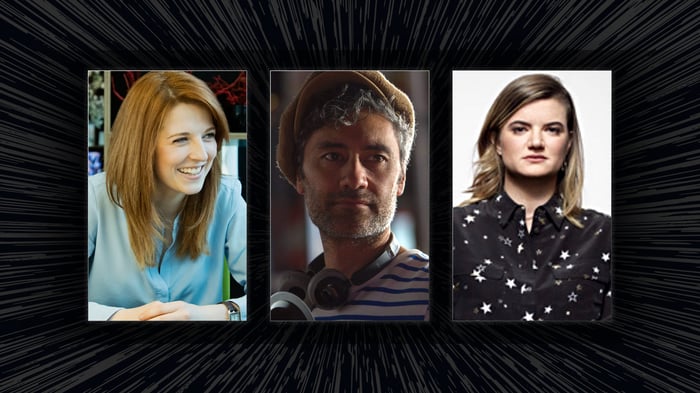 The same announcement also introduced an as-yet-untitled Star Wars series for the Disney+ video-streaming service. Here, Disney tapped Emmy-nominated writer Leslye Headland to write, develop, and manage the series as its showrunner. Headland is best known for her writing and directing work on the Netflix (NFLX 1.39%) original series Russian Doll and the Fox drama Almost Family.

The final movie in the nine-title Skywalker Saga, last year's The Last Jedi, was largely snubbed by the awards circuit and far from universally loved by audiences.

There was never any doubt that Disney would continue to produce new content in the familiar and lucrative Star Wars world, but the company could have punted the Lucasfilm universe to unknown writers and directors. Instead, the story moves forward in the hands of award-winning creative talents.