A little less than two weeks after it ran a computer-simulated race instead of the postponed Kentucky Derby, Churchill Downs (NASDAQ:CHDN) is readying its namesake racetrack for the restart of live races in the near future. While racing will start this weekend, the first major stakes is scheduled for Saturday, May 23.

The Matt Winn Stakes, named in honor of Colonel Martin "Matt" Winn, an important Kentucky Derby organizer in the early 20th century, is the only national race currently scheduled for May. Featuring a $150,000 purse, it may have a much higher profile than usual this year as contenders in later stakes use it as a prep race for upcoming contests. 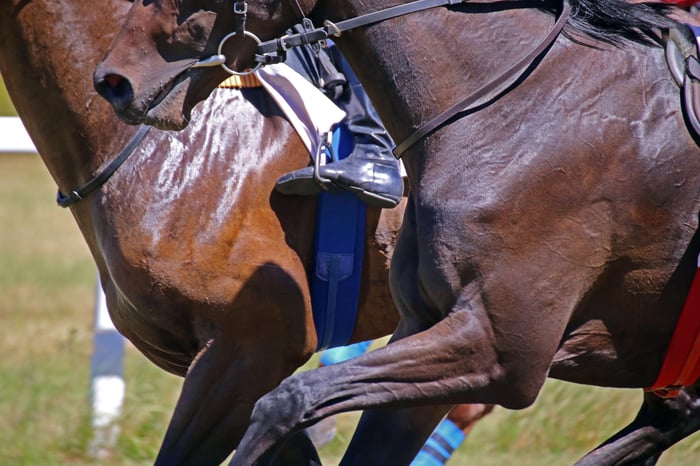 Horses began to arrive at the Churchill Downs racetrack stables yesterday, along with their trainers and support personnel such as farriers, veterinarians, and grooms. 175 animals arrived on May 11, with another 300 expected to put in an appearance this week. The facility will host 26 days of spring racing, with races mostly occurring on Thursday, Friday, Saturday, and Sunday each week until the wrap-up on June 27.

In response to the ongoing COVID-19 pandemic, which is still causing tens of thousands of new infections and usually over a thousand deaths daily, both spectators and the media won't be allowed to attend the spring races. Personnel onsite will be screened every day and given a different colored wristband each morning so that their health screening status can be confirmed at a glance.

The world-famous Kentucky Derby, which typically draws crowds numbering well over 100,000, was rescheduled to Sept. 5 because of the coronavirus pandemic. New dates haven't yet been chosen for the other two major races of the Triple Crown, the Preakness and Belmont Stakes.