While its blockbuster cancer therapeutic Keytruda continues to excite pharma investors, a piece of equally important news is that Merck (NYSE:MRK) is in the midst of a major strategic effort to create a new drug development pipeline for neurodegenerative diseases like Parkinson's disease, Alzheimer's disease, amyotrophic lateral sclerosis (ALS), and Huntington's disease.

It's debatable whether its newfound investment in treating neurodegenerative diseases will pay off. The recent history of big pharmaceutical companies going after this opportunity is one of costly failure, epitomized by one of Merck's Alzheimer's disease therapies sinking during its phase 3 clinical trials in 2018. Given that the company has learned a lot since 2018 and positioned its resources accordingly for its present attempt to enter the neurodegenerative disease therapy market, there's reason to believe that things will be different this time around. 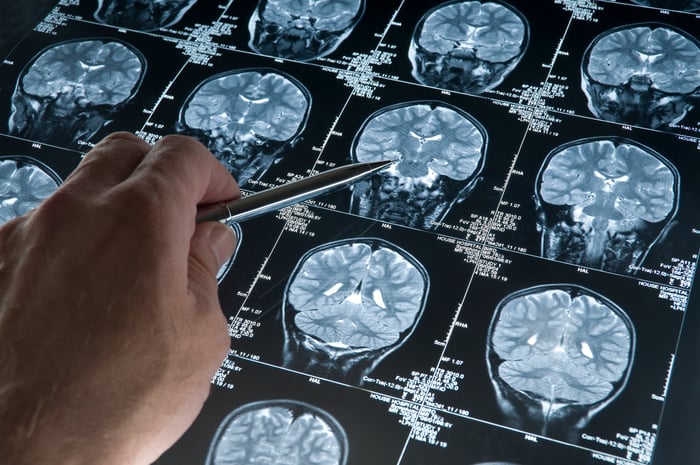 Merck vacuums up the output of two promising small biotechs

To restart its degenerative disease drug pipeline with preclinical leads, Merck has looked to nimbler companies willing to perform basic science as needed. Merck recently started a two-year drug development partnership with Almac Discovery investigating small-molecule drugs that affect deubiquitinase (DUB) enzymes, which the partners believe may be relevant to a handful of different neurodegenerative diseases. Furthermore, while it isn't the focus of the partnership, Almac also claims that its DUB research could have wider implications into future therapies for cancers, metabolic disorders, and viral diseases, meaning that Merck will have the option to explore these areas to supplement its early-stage pipeline elsewhere.

While Merck and Almac do not have a specific disease target for their DUB research within neurodegenerative diseases, the terms of the partnership appear to be heavily weighted in favor of Merck, given that it will retain exclusive rights to preclinical development, clinical research, and commercialization. Effectively, this means that Merck is paying Almac to perform the lead generation and basic research that Merck and other large pharmas have traditionally eschewed. Once Almac generates a promising therapy candidate, Merck will subsequently usher it through the clinical trial process using its industry-leading clinical and regulatory expertise.

Almac isn't the first small biotech to shoulder preclinical responsibilities for Merck in the neurodegenerative disease space. In 2019, Merck paid $576 million to buy one of GlaxoSmithKline (NYSE:GSK)'s neurodegenerative disorder start-ups, Calporta Therapeutics. Calporta's assets include several preclinical-stage small-molecule drugs targeting cellular receptors which are implicated in Alzheimer's disease as well as muscular dystrophy and Parkinson's disease. Merck's acquisition of Calporta bolsters the company's neurodegenerative disease therapeutics preclinical pipeline, giving Merck a credible pathway to producing therapies for both Alzheimer's disease and Parkinson's disease within a decade. Much like with the Almac partnership, Calporta's scientific approach could be relevant to future therapies in a variety of different areas, giving Merck a wide menu of new opportunities.

It's hard to envision a world in which Merck's investment in neurodegenerative disease is misguided, but there's a good chance that Merck will take a beating in the short term if it fails to make a positive impact in the pandemic like many of its competitors are trying to do. The company is moving slower with its potential COVID-19 therapeutics than its peers. Presently, Merck appears to be in the preclinical stage with several antiviral drug candidates originally designed for non-COVID diseases, but given its penchant for producing vaccines, it's likely that a COVID-19 vaccine candidate is in preclinical development as well.

Aside from the pace of its ongoing COVID-19 research efforts, moves by Merck like spinning off several of its more innovative divisions might cause the company some turbulence in the medium term, but will likely shore up its long-term prospects.

In the context of neurodegenerative disease, a bullish signal for Merck will be if it acquires more small biotech companies in the space or initiates new collaborations that mesh with its ongoing efforts. In contrast, if several years down the line Merck is losing faith in its approach with Calporta and Almac, it might be feasible to sell the fruits of the labor to a competitor and recoup some of the research and development costs.

Finally, Merck is a company with a long view of the market, so don't be surprised if it takes years of work before it has something to show for its recent investments. In the meantime, Merck can probably rely on its profitable oncology drugs like Keytruda or its vaccination products like Gardasil, each of which have posted reliable double-digit growth in the last several years.

Investors should be ready for opportunities to buy the stock for the longest-term hold to reap the benefits of Merck's future entry into the neurodegenerative disease market.