Target's (NYSE:TGT) first-quarter results, reported on Wednesday, included some promising figures. The retail giant put up an 11.3% increase in sales at a time when many are feeling the strain of an economic shutdown.

Let's be clear. Overall earnings went down. Earnings from continuing operations declined to $0.56 per share on a GAAP basis. That's a 63.3% decline year over year. You'd be hard-pressed to find many businesses that didn't incur sudden costs and shifts that didn't eat into the bottom line in the first quarter. This will likely be even more pronounced in the second quarter since that period has seen the brunt of the pandemic.

Here are three other takeaways that emerged from Target's first-quarter earnings report. 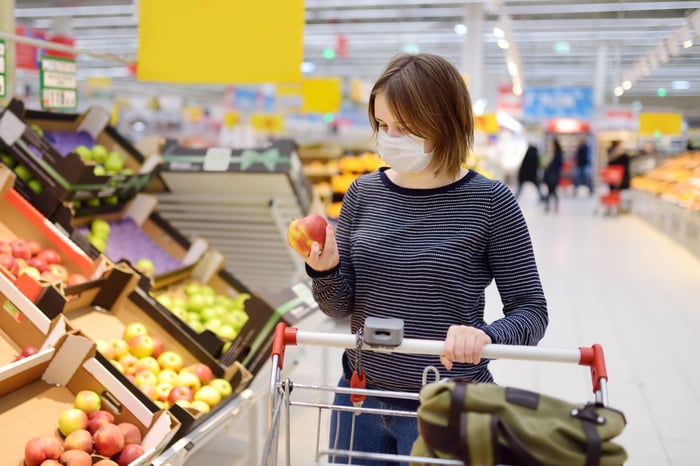 Comparable-store sales marked a 10.8% growth in the first quarter. The interesting thing was the breakdown of those comps. The actual number of transactions decreased by 1.5%, as consumers ventured out less often. The catch was the amount they spent while going out. In a pretty clear effort to minimize shopping time, people bought a lot more stuff while they were in the store. The average transaction amount jumped 12.5% in the quarter compared to a 0.5% increase a year ago.

Of course, it helps that the chain offers products is in the right categories. The earnings release made note of the fact that consumers purchased an "unfavorable category mix," which included more lower-margin items like essentials and food and beverages. Higher-margin items like apparel experienced a slowdown.

Thanks to its broad range of inventory, Target can successfully work its way through different demand shifts like this.

Digital sales skyrocketed in the first quarter, as consumers opted for ways to avoid visiting crowded places such as an actual store. Comparable digital sales increased 141%, now representing just under 10% of Target's total comp sales growth. The earnings release noted that the digital growth increased each month of the quarter, gaining 33% in February and 282% in April.

The company is allocating its overall structure well, as just under 80% of total digital sales were fulfilled by stores. A retail setup where you can balance demand between physical stores and an online presence helps the bottom line. It is incredibly important for retailers to showcase that they can compete with Amazon.com on the e-commerce front. Target is doing that rather well.

3. Order pickup is a success

Tying into the balance between brick-and-mortar and online, Target's order pickup initiative is showing a lot of potential. This strategy sort of originated with Home Depot, which used it to draw customers in for store traffic. We've since seen it adopted by retailers like Walmart and Target.

Same-day services, which include Order Pick Up, Drive Up, and Shipt delivery, experienced growth of 278% in the quarter. The area of the business accounted for 5% of Target's comps growth.

Perhaps going against the current trend a bit, I believe this combination of retail options is the future of retail. On a mass scale, the logistics of pure e-commerce, where all goods are shipped directly to customers' homes, would be a nightmare. There's certainly a place for it, but time is a big factor. Sometimes you forget milk for a recipe, and you need it now. In that case, you're going to the store.

Especially at times such as now, consumers can save themselves the time of having to go into a store to shop by ordering everything before they get there. In many ways, it is even more convenient than e-commerce. You can get things faster.

The benefit to Target is that when you order items and get to the store, you're more likely to go into the store. Again, I use the milk scenario. Say you order your goods, and then realize you've forgotten something. You're going to run into the store to pick it up when you get there. That increases store traffic, and the chances of you buying something else while you're in there.

What's encouraging about Target's results is the way it managed to put together growth on both the store and digital fronts, while experiencing hypergrowth in fledgling initiatives like its same-day services. I've always liked Target because it offers a nicely diversified lineup of inventory. Coming out of the current chaos, I think it stands to be a winner.