The stock market moved higher on Monday morning, brushing off protests across much of the U.S. as well as ongoing coronavirus-related concerns. Despite warnings from major investment banks that the financial markets aren't in touch with the reality of the economic challenges facing the world, investors seem to feel there's little choice but to put available cash to work in stocks. Just before 11 a.m. EDT, the Dow Jones Industrial Average (DJINDICES:^DJI) was up 65 points to 25,448. The S&P 500 (SNPINDEX:^SPX) had risen six points to 3,051, and the Nasdaq Composite (NASDAQINDEX:^COMP) had picked up 41 points to reach 9,531.

Over the weekend, the first launch of a U.S.-based space mission in nearly a decade took place. A partnership between the National Aeronautics and Space Administration and privately held launch company SpaceX was responsible for sending two astronauts to the International Space Station. The news lifted shares of two other companies, Tesla (NASDAQ:TSLA) and Virgin Galactic Holdings (NYSE:SPCE), for related but somewhat different reasons. 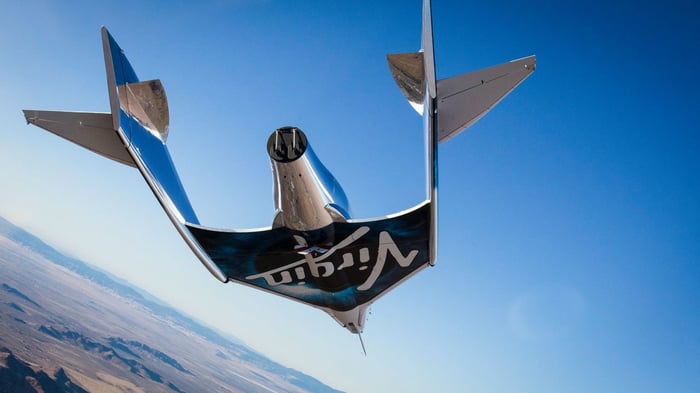 A power play for Elon Musk

It's important for investors to understand that SpaceX and Tesla are two separate companies. Musk owns a majority equity interest in SpaceX through a trust, and there's been no reported investment in SpaceX by Tesla. Therefore, although SpaceX's success definitely benefits Musk personally, it doesn't have a direct financial impact on Tesla.

However, Tesla still wins when SpaceX does well. Good publicity for Musk's space venture feeds his celebrity status, which in turn can drive sales of Tesla vehicles. In addition, there's potential for some overlapping needs across the two companies. For instance, Tesla battery technology could prove useful in space applications, and some materials that SpaceX develops might in turn be beneficial for automotive production.

Until SpaceX goes public, most investors won't have a chance to tie their fortunes to the space launch specialist. That makes Tesla the only game in town for those who want to bet on Musk's overall success.

Virgin Galactic's rise of between 3% and 4% makes somewhat more sense in light of the successful SpaceX launch. Proof of concept is important, and Virgin Galactic hopes to overcome the same obstacles that SpaceX did in fulfilling the mission of getting people into space.

Here, too, there's some potential for confusion. Virgin Orbit, which is a different company that's not part of Virgin Galactic, tried last week to send a rocket into orbit. The effort failed, but that didn't have a direct impact on Virgin Galactic's business.

Virgin Galactic is counting on the thousands of people who want to join the two American astronauts that SpaceX sent into space. So far, those potential customers have had to be patient, as efforts to ready space tourism flights for launch are still ongoing. With no firm launch window in place, both customers and investors have little choice but to wait and see whether the company will eventually make good on its potential.

The NASA/SpaceX launch over the weekend reignited dreams of space travel for a new generation of would-be astronauts. Whether that will result in long-term gains for Virgin Galactic and Tesla remains to be seen, but fans of Elon Musk are ecstatic about the electric automaker CEO's latest big win.