Kraft Heinz (NASDAQ:KHC) was once considered a good defensive stock. The combined company, born from the merger of Kraft and Heinz in 2015, owned a diverse portfolio of well-known brands and paid steady dividends.

Unfortunately, a consumer shift toward healthier and private-label brands, exacerbated by the management team's focus on cutting costs instead of innovating and marketing new products, caused Kraft's growth to stall out. 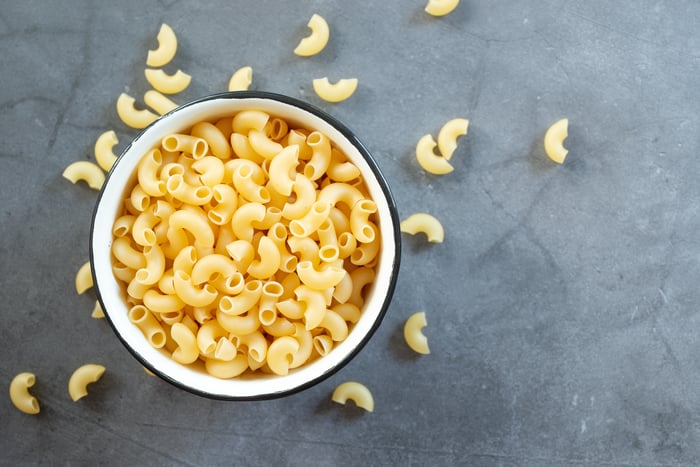 It then struggled with contracting margins, big writedowns on its top brands, and an SEC probe regarding its accounting methods. A dividend cut shook out more investors, and the hiring of a new CEO didn't allay those fears.

Yet Kraft Heinz's stock has advanced more than 20% over the past three months as the COVID-19 crisis boosted sales of its packaged foods. Is that growth spurt temporary, or will it buy Kraft enough time to mount a turnaround and generate millionaire-making returns for patient investors?

Kraft's organic sales rose 6.2% annually in the first quarter, breaking a four-quarter streak of declines. It attributed six to seven points of that incremental growth to COVID-induced purchases.

Its adjusted EBITDA dipped 1.1% annually, including a 1.8 point impact from divestitures and 0.8 impact from currency headwinds. COVID-19 shopping boosted that figure by nine to ten points.

Therefore, Kraft's organic sales will likely decline again after the pandemic passes, and its adjusted EBITDA margin could contract at a steeper rate as it loses pricing power against its nimbler rivals:

Its strengths are outweighing its weaknesses (for now) 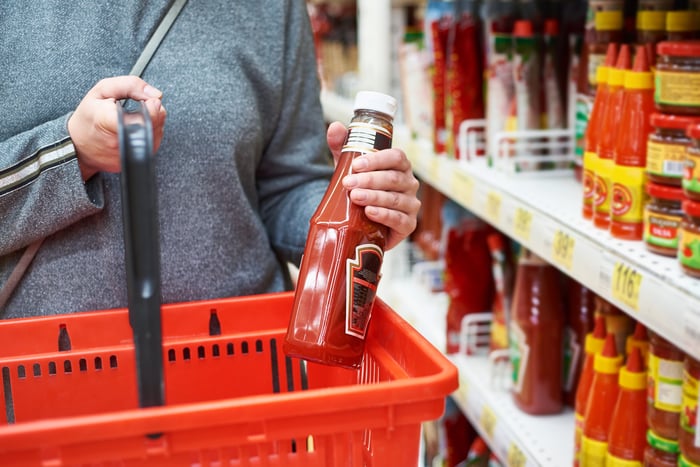 However, robust sales of Kraft's products at grocery and online stores are offsetting its weak food service sales.

Kraft expects that trend to continue in the second quarter as retailers restock their inventories, and for its organic sales to grow by the mid-single digits in the U.S. and the mid-to-high single digits overseas. Canada, which generates a higher percentage of its revenue from food service, is expected to post a low-single-digit decline.

Kraft warns that balancing act could get tougher in the second half of 2020, as the COVID-19 tailwind dissipates and it exits McDonald's (NYSE:MCD) McCafe packaged coffee business. The two companies had been partners since 2014, but McDonald's switched from Kraft Heinz to Keurig Dr. Pepper (NYSE:KDP) last year.

Kraft's long-term debt of $31.5 billion, $1.2 billion of which matures within a year, also remains an albatross around its neck and prevents it from pursuing aggressive acquisitions, launching new marketing blitzes, or raising its dividend again.

That ceiling will likely limit Kraft's turnaround efforts to new campaigns for classic brands like Heinz ketchup and Kraft macaroni and cheese, the reversal of its margin-crushing price reductions under its former CEO, a "zero based" budgeting strategy to cut costs and squeeze out fresh cash, and additional divestments.

Kraft didn't offer any clear guidance for the full year, but CFO Paulo Basilio maintained that 2020 would be "an important year of progress in the multiyear turnaround" during the conference call.

Basilio claimed Kraft was still "on track" to "establish a strong base of sales and earnings, to rebuild underlying business momentum, and continue to reduce debt while maintaining our current dividend."

Those goals were vague, but they indicate Kraft remains a work in progress and will prioritize the stabilization of its business over aggressive expansion efforts.

But is Kraft Heinz a "millionaire maker" stock?

Investors should take those forecasts with a pillar of salt, especially as the COVID-19 situation evolves, but the stock trades at just 13 times forward earnings while paying a forward yield of 5.3%.

That low valuation and high yield should set a floor under Kraft Heinz's stock, but the bulls probably won't charge in until its sales growth stabilizes with expanding margins. Until then, Kraft Heinz might be a tempting value play for patient investors, but those seeking "millionaire making" returns should seek out higher-growth stocks that face fewer headwinds.