The March market crash created some amazing buying opportunities that many investors are likely kicking themselves for missing. But with the coronavirus pandemic still weighing on the markets, another crash could happen this year. And if it does, investors could score some great deals again. Below are three stocks you'll want to be ready to pounce on if there's another crash:

Village Farms International (NASDAQ:VFF) fell as low as $2.07 during the March market crash, and the cannabis company's stock has more than doubled since hitting that low point. It may not reach that level again, but if the markets send Village Farms' stock down anywhere near that price, investors shouldn't hesitate to buy it. 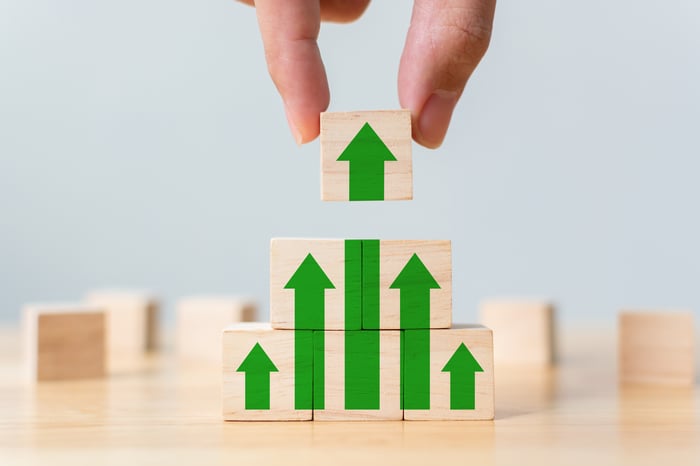 In the first quarter of fiscal 2020, Pure Sunfarms' cultivation cost was just $0.64 per gram, which was down from $1.04 per gram a year ago. With the greenhouse operating at a higher level, Pure Sunfarms was able to benefit from greater economies of scale. In Q1, the company reported sales growth of 22%, and its net income of $6.2 million was up 40% year over year.

Village Farms' top line was flat from the prior-year period, but the company was able to record a profit of $4.2 million, which included its share of earnings from Pure Sunfarms. It was the third time in five quarters that Village Farms generated a profit.

Profitable pot stocks aren't all that common, and that's why if Village Farms' stock goes on sale again, it could be a steal of a deal.

Costco (NASDAQ:COST) may not have the growth potential of a pot stock, but it's a stable choice that investors can just buy and forget about. In fact, its stability is one of the reasons the stock doesn't go on sale all that often. Year to date, shares of Costco are up around 3%, while the S&P 500 is down 3%. And even in March, when the markets were crashing, shares of Costco were only down around 7% year to date at their low point (the S&P 500, however, had declined by more than 30%).

The company has proven to be resilient during the coronavirus pandemic, and that's one of the great reasons Costco is a long-term stock that can fit in any portfolio. Even with the economy in a recession, consumers are still going to Costco.

On June 3, the Washington-based company released its most recent sales data. Its net sales totaled $12.6 billion in May, and that was up 7.5% from last year. That's also in line with the 7.7% revenue growth that Costco has seen over the trailing 39 weeks. The company is also doing especially well in e-commerce, as comparable sales for the four-week period ending May 31 were up 106.2% year over year and 37.5% over the 39-week period.

Whether it's online or in-store, the demand for Costco's products is still there. The stock is a safe buy that also pays a quarterly dividend of $0.70 that today yields around 0.9%. While that's below the S&P 500 average of 2%, it's a good boost on top of the stock's above-average returns.

Another Washington-based company, Microsoft (NASDAQ:MSFT), is also a stable investment that investors can buy and forget about. It's a bit more volatile than Costco, and in March, shares of Microsoft were down as much as 14% from where they started the year. As of now, however, the stock has more than recovered and is up around 30% year to date.

Several areas of the tech giant's business are producing double-digit growth. In its third-quarter results, which Microsoft released on April 29, sales from its cloud business, Azure, were up 59% from the prior-year period. Its office products and cloud services were all up by at least 13%, and revenue from LinkedIn rose by 21%. Its Dynamics 365 cloud-based business applications platform, which aims to improve many facets of a company's business, grew at a rate of 47%.

With so many different ways to grow, it's no wonder investors love Microsoft. It's continued to find opportunities to create and deliver quality products and services. The company has also produced a profit margin of at least 30% in each of the past four quarters, generating a strong bottom line amid all that growth.

Microsoft currently pays a quarterly dividend of $0.51, which on an annual basis yields 1%.

So far, these three stocks have had varying levels of success in 2020, with Microsoft leading the way: 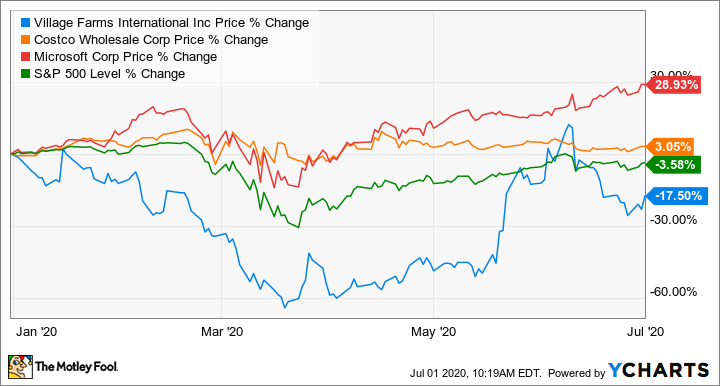 If you're only looking to add one of these stocks to your portfolio, I'd suggest going with Microsoft, should its value drop during another crash.

Village Farms may have more potential upside if it sinks in value, but it's less of a sure thing than the tech stock. And while Costco's doing well amid the recession and pandemic, its growth is still nowhere near as impressive as Microsoft's. For a good mix of stability and growth, Microsoft is the stock I'd buy if there is another market crash this year.

3 Cheap Stocks That Could Be Bargains if the Market Crashes @themotleyfool #stocks $MSFT $COST $VFF $EMHT.F Next Article
Current