U.S. automakers have been squeezed this year by a combination of falling demand because of the weak economy and supply constraints because of coronavirus-related plant shutdowns. They felt the greatest pressure in the second quarter, as the pandemic peaked in many parts of the U.S. during April.

These factors impacted General Motors (NYSE:GM) and Ford Motor (NYSE:F) similarly over the past few months. In recent days, both top Detroit automakers reported that domestic vehicle deliveries plummeted by about a third last quarter.

GM and its dealers delivered 492,489 vehicles in the U.S. during the second quarter: down 34% year over year. All four of its brands posted sales declines in excess of 30%, including a 41.4% drop at Cadillac, which was hurt by a soft luxury vehicle market. 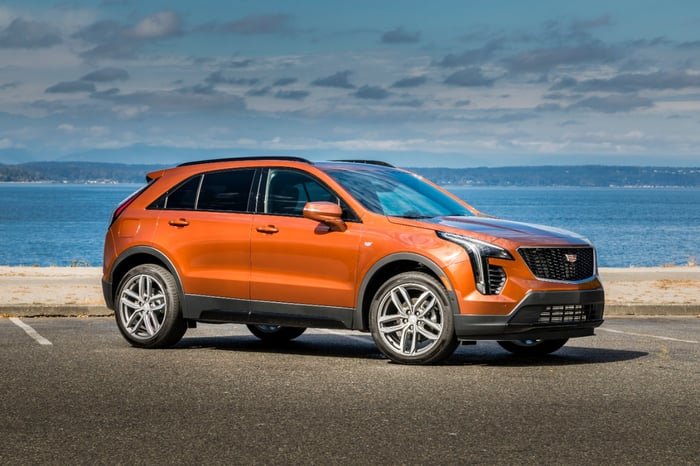 Meanwhile, domestic deliveries fell 33.3% year over year at Ford, consisting of a 33.9% decline for the Ford brand and an 18% drop for Lincoln. While cars continued to lead the sales declines at Ford -- deliveries fell 59.5% year over year due to the company's strategic decision to phase out most sedans and hatchbacks in North America -- truck and crossover/SUV sales also plunged by more than a quarter.

Both GM and Ford hinted that sales trends improved over the course of the quarter. However, even in June, the sales pace remained well below normal levels. That's consistent with the broader auto market's performance. The seasonally adjusted annual sales pace fell to just 8.7 million in April but bounced back to 12.2 million in May and improved to around 13 million in June, still well shy of the roughly 17 million vehicles sold in the U.S. last year.

On the bright side, demand for full-size pickups -- by far the biggest source of profits for General Motors and Ford -- has held up quite well. GM delivered 176,256 full-size pickups in the U.S. last quarter, including both the Chevy Silverado and GMC Sierra nameplates. That was down 11.6% year over year. On a year-to-date basis, the General is still sitting on a solid 5.6% uptick in full-size truck deliveries, thanks to a surge in sales earlier in the year.

Ford didn't fare quite as well, as F-Series truck sales slumped 22.7% to 180,825 units. However, it was facing a much tougher year-over-year comparison. Despite the steeper drop in F-Series sales, Ford reclaimed the top spot in the U.S. pickup industry in the second quarter after falling behind GM in Q1. Moreover, Ford said that retail sales of F-Series trucks slipped just 2% last quarter. In other words, lower fleet deliveries drove the bulk of the drop in F-Series sales. Much of that decline could be explained by timing factors. Additionally, Ford reported a 19.8% year-over-year surge in domestic deliveries of its Ranger midsize pickup, bolstering its overall performance in the pickup market. By contrast, midsize pickups were a weak spot for GM, as combined sales of its Chevy Colorado and GMC Canyon models fell 42.5% year over year to 25,068 units.

The other piece of good news is that supply constraints have limited auto sales recently. Inventory has been at historically low levels for the past two months, particularly for pickups, compact cars, and compact crossovers, as most automakers closed their U.S. manufacturing facilities for two months starting in mid-March. (GM has been particularly hard hit, as it had low inventory even before the COVID-19 plant shutdowns, due to a six-week strike during contract negotiations with the UAW union last fall.) As inventory improves over the next few months, sales trends could continue to accelerate.

Most major automakers will report huge losses in the second quarter, as their U.S. plants were completely closed for more than half of the quarter and only gradually ramped up to normal output thereafter. That said, the outlook for the third quarter is much better, as automakers will be able to devote some production to rebuilding inventory, and higher inventory should in turn enable higher sales.

For example, General Motors is running three shifts at all of its truck and SUV plants, and it plans to skip the traditional two-week summer shutdown at those facilities -- and most of its other factories, too -- in order to meet demand and rebuild inventory. This kind of flat-out production would be very good for earnings.

That said, COVID-19 cases are rising rapidly again in many parts of the U.S. The UAW union is concerned about rising case totals at GM's plants in Arlington, Texas and Wentzville, Missouri, which build the company's full-size SUVs, vans, and midsize pickups. The union has officially asked GM to close the Arlington plant again to protect workers' safety.

If automakers can keep their factories open, it looks like the worst should be over for the sector. However, the risk of another round of temporary shutdowns remains significant, and that could put a dent in automakers' recovery.