The first half of 2020 was a momentous time for the travel and leisure industry -- but not in a good way.

Obviously, this industry has been hit hard by the COVID-19 pandemic, leaving many companies with basically zero revenue for the first time in their corporate lives. In order to stave off bankruptcy, many in the travel and leisure industry have issued new high-priced debt, low-priced stock, or both, buying themselves time before the industry returns to health. With many "stay-at-home" stocks booming, the travel industry is still in the doldrums, with the stocks of many leading players far below their pre-pandemic highs.

That means these stocks could bounce back in a big way should travel and leisure activity return to some semblance of normal. This could either happen slowly, or more rapidly with the development of an effective COVID-19 vaccine or cure. 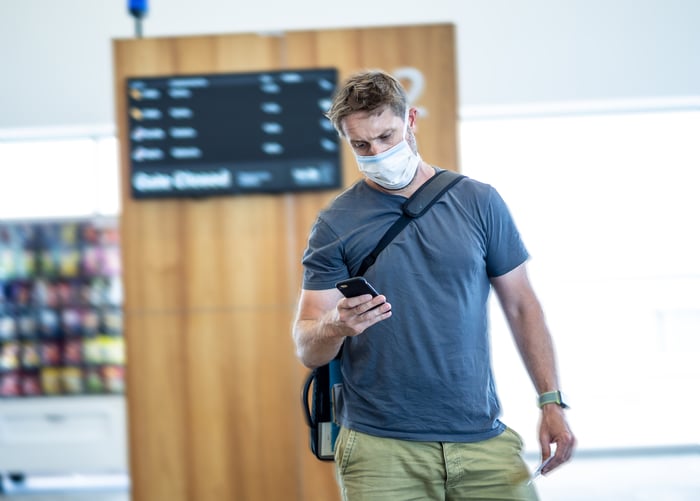 These travel stocks could bounce back big in the years ahead. Image source: Getty Images.

Of course, the timing of that event is still unknown, if it will ever happen. Therefore, when looking to play a rebound in the travel sector, there are a few criteria I'd recommend: First, that the company can survive over the next 18 months or so with little or no revenue; second, it should be a high-quality company that was already doing well prior to the outbreak.

In that light, three of my top picks to play a travel recovery are Expedia (NASDAQ:EXPE), Walt Disney (NYSE:DIS), and, for the risk-tolerant investor, Royal Caribbean Cruises (NYSE:RCL).

Expedia: A turnaround within a comeback

Online travel agency (OTA) Expedia has been a recommendation of mine for a while now, for three main reasons. One, as an online travel agency, a lot of Expedia's costs are variable and related to marketing. That means Expedia can "turn off" a good amount of its cost base, making it a good candidate to survive a prolonged travel downturn.

Finally, Expedia is more skewed to consumer travel and leisure, as opposed to corporate travel. In the age of cost-conscious corporations adapting to COVID by using videoconferencing tools, I'd expect consumer travel to return much faster than the corporate side of the equation. Recent data points to a big jump in consumer intent to travel this summer after months of lockdowns. As such, I'd expect the company's Vrbo segment -- which is an Airbnb competitor -- to do fairly well as customers look for vacation rentals over hotels.

Expedia also recently raised nearly $4 billion in capital back in April, including $1.2 billion from private equity firms Apollo Global Management and Silver Lake Partners. Each firm received seats on Expedia's board, as well as warrants to buy stock at $72, about 15% below the stock price today. That raise not only boosted Expedia's liquidity to get through the crisis, but also put invested shareholders in the decision-making mix. Combined with Kern's restructuring, an invested management team should put Expedia on better footing as the travel industry recovers.

With Expedia's stock still 50% below its all-time high, this restructuring-within-a-rebound could allow the company to bounce back nicely over the course of a few years.

Another company really hurting from decreased travel is Disney. While you may not think of Disney as a "travel" stock, it is actually very exposed, not only within its parks, cruises, and experiences divisions, but also through ESPN's exposure to live sports events, as well as out-of-home movie theaters. As a result, I expect Disney's results to be very, very ugly this year. However, Disney's beloved brand and alternative revenue streams should allow the company to make it to the other side of the crisis.

For instance, Disney's new Disney+ streaming service is off to white-hot start. Its most recent subscriber count from May 4 was 54.5 million, extremely impressive considering the platform only launched in November. Disney also reported 32.1 million Hulu subs in the most recent March quarter, up 27.4% over the past year, and ESPN+ subs surged 259% to 7.9 million. Disney also announced it will hike prices for ESPN+ in August, from $4.99 to $5.99, which should help out profitability even more.

Disney's streaming success has been a key point of optimism as the other parts of its businesses are shut down. Though coronavirus cases have been making a comeback across the U.S., Disney still plans to open Disney World in a limited capacity on July 11. On the other hand, the company's July 17 Disneyland opening was just delayed indefinitely, per orders by the state of California.

Meanwhile, Shanghai Disney has already reopened at very low capacity, with plans to steadily increase attendance each week until it gets to 30% as a near-term goal. CEO Bob Chapek recently said, "This is a first step, it's a baby step, but we're very encouraged by what we're seeing in Shanghai. ... If guests continue to behave in the way we have, I think we can approach [full capacity]." By that, he meant that Chinese guests had been diligent about wearing face masks and adhering to social distancing protocols.

Let's hope American guests behave themselves in a similar manner and domestic parks can reopen. As long as they do, it could mark the first stages of a recovery for Disney, a long-term winner still 27% below its all-time highs.

Royal Caribbean: A survivor in the cruise industry

While cruise stocks have enjoyed a huge bounce off of their March lows, the entire sector has sold off lately, as COVID-19 cases have made a resurgence in the U.S.

As such, those who believe in the future of cruising may wish to put these beaten-down stocks on their watchlists. Though I had initially preferred a different cruise stock in the early days of the pandemic, these days I would recommend looking at Royal Caribbean.

Why the new pick? Two reasons. First, prior to the pandemic, Royal Caribbean had the highest EBITDA margins in the business, signaling it was able to manage its costs and get the most out of existing assets compared to others. Second, thanks to two very recent capital raises, Royal Caribbean now has about 20 months of liquidity in case of a prolonged "no-cruise" scenario, the longest buffer in the industry.

Royal Caribbean recently pushed back its date to recommence cruising to Sept. 16, which is obviously a lot sooner than 20 months. Of course, that date could get pushed again, and I don't expect any cruise company to return to full strength until a vaccine or significant treatment is available for COVID-19.

Still, cruising has been a long-term growth industry for two decades, showing no signs of letting up prior to the pandemic. Assuming a medical breakthrough occurs or cruise lines can mitigate infection spread to the satisfaction of authorities within two years, Royal Caribbean looks like the best bet to bounce back.

Trading at just around 7.5 times "normalized" 2019 earnings -- adjusted for higher interest expenses from the new debt -- Royal Caribbean is a high-risk, but high-upside, way to play a recovery in this consumer discretionary industry.