Please ensure Javascript is enabled for purposes of website accessibility
Log In Help Join The Motley Fool
Free Article Join Over 1 Million Premium Members And Get More In-Depth Stock Guidance and Research
By Jim Halley – Jul 7, 2020 at 7:35AM

Three of the best-performing pharmaceutical stocks over the past year have been clinical-stage biotech and biopharmaceutical companies -- businesses that aren't making profits but have promising drugs, or more often, drug candidates.

Though a few candidates will become breakout successes, the overwhelming majority of clinical-stage drugs never make it to market, and 11 biopharmaceuticals went bankrupt last year, according to a BioPharma Dive report. So it should come as no surprise that such companies carry some of the biggest risks -- and offer some of the biggest rewards -- in the healthcare sector. 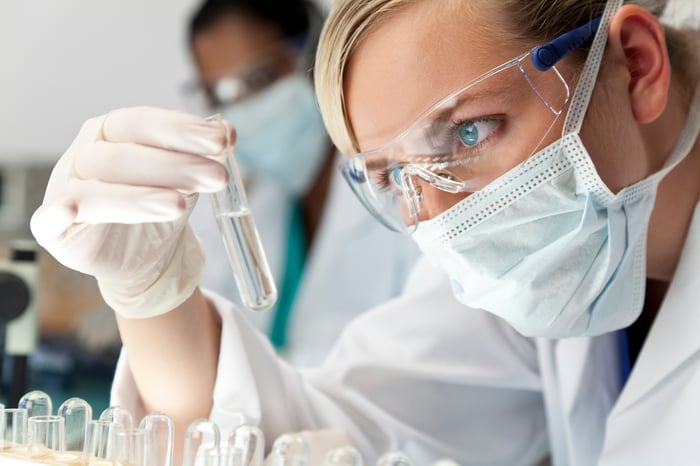 These three have already rewarded investors who bought a year ago, though Relmada remains far below the 10-year-high of $71.60 it set in 2014. The question now is, how much higher can any of them go from here?

Relmada is turning old drugs into new ones

Shares of Relmada Therapeutics (RLMD) have risen more than 484% in the past year. The New York City-based clinical-stage biotech specializes in drugs that affect the central nervous system.

Relmada doesn't have any revenue yet, but it has four drugs in its pipeline. One of them, REL-1017 (dextromethadone), looks promising as a treatment for major depression disorder (MDD). According to Relmada, REL-1017 fared well in its phase 2 trials and the company plans to start two phase 3 trials in the fourth quarter.

Its other three drugs are REL-1015 (LevoCap ER), REL-1021 (MepiGel), and REL-1028 (buprenorphine). LevoCap ER is a time-release formulation of Levorphanol, a powerful synthetic opioid which has been used as a pain reliever for nearly 80 years. MepiGel is a topical version of local anesthetic mepivacaine, used for treating neuropathies that occur in diabetes, neuralgia, and HIV-associated neuropathy. And buprenorphine is used to treat opiate use disorder as well as chronic pain.

As of March 31, the company had $115 million in cash; given that it spent $14 million last year, it has enough in the bank to possibly last for another eight years or so before it needs to either turn a profit or seek out other sources of funding.

Neoleukin has been a fast starter

Neoleukin Therapeutics (NLTX), a Seattle-based biopharmaceutical that just went public last August, is up more than 500% since then. For its therapeutics, the company uses de novo proteins -- entirely new proteins designed using models that require extraordinary computing power to predict their structure (as opposed to ones already existing in the body) -- to treat immunological disorders. The company was launched by the researchers at the University of Washington who discovered the de novo proteins it's developing. While Neoleukin is a start-up, it has some history behind it as it merged with Aquinox Pharmaceuticals last summer.

Last week, Neoleukin announced positive preclinical findings for its versatile anti-tumor drug candidate NL-201 when tested on animals. The company said it plans to present an Investigational New Drug Application (IND) to the FDA by the end of the year.

Neoleukin says NL-201 mimics interleukin-2 (IL-2), an immune-signaling molecule that is produced by the body's T-cells as a response to infections. NL-201 is more stable than IL-2 immunotherapies and lacks their side effects, such as significant toxicity and lower effectiveness when binding with nontargeted cells. Current IL-2 immunotherapies are typically used in patients with melanoma and renal cell carcinoma. 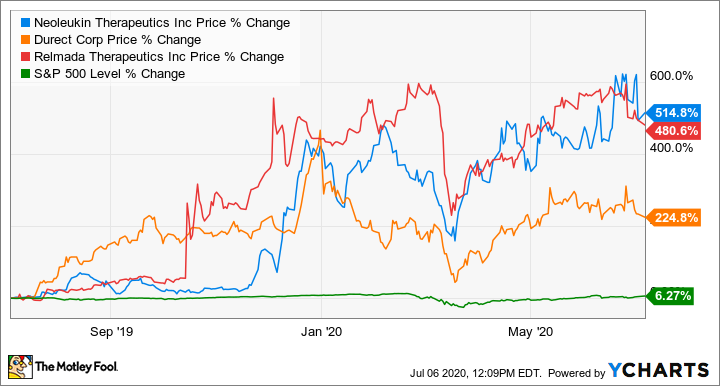 Durect has a promising lead candidate

Durect (DRRX), unlike Relmada and Neolukin, is actually producing revenue, but like them, it's not yet turning a profit. As of last quarter, it was down to $52.5 million in cash.

The Cupertino, Calif., company started 2020 with bad news when the FDA's Anesthetic and Analgesic Drug Products Advisory Committee had a tied vote regarding approval for Posimir, a new extended-release formulation of the generic pain reliever bupivacaine designed to be directly administered to patients' surgical sites.

Durect's share price briefly dropped 11% when the committee's decision was made public, but the stock price has bounced back, rising more than 57% over the past three months. Overall, it is up more than 275% in the past year.

The company is still talking with the FDA about Posimir, but its lead drug candidate now is DUR-928, which the company says can regulate genes involved in lipid metabolism, inflammation, and cell survival.

DUR-928 is in a phase 2 trial for the treatment of alcoholic hepatitis and a phase 1 trial for the treatment of nonalcoholic steatohepatitis (NASH) -- an indication with no approved drugs so far. The company also is expected to shortly begin a phase 2 trial of DUR-928 in COVID-19 patients with acute liver or kidney injury. A study published in the medical journal Gastroenterology showed that 62% of hospitalized COVID-19 patients display evidence of liver injury.

Why these biopharmaceuticals may be worth the risk

While the share prices of these companies have grown out of proportion to their revenue -- or lack thereof -- investors value clinical-stage biotechs and biopharmaceuticals based on the revenues and profits they could produce in the future. The question for potential buyers now is how much of that potential is already priced into the stocks.
Of the three, Relmada may be the safest bet because of its strong cash position and growing pipeline. Two of its lead drug candidates are variations on older drugs that have already been shown to be safe, so getting approval for them may not be that difficult.
Neoleukin has a promising and versatile lead candidate, but a limited amount of cash. However, I believe continued progress in trials would make it easy for the company to raise more funding for research and development.
Durect may be the biggest risk on the list, because it's already had one drug that hasn't gotten FDA approval and is in the weakest cash position of the three. Investors will want to see more successful trials before putting more money into the company.