Alex Carchidi
(TMFacarchidi)
Author Bio
Alex began writing for the Fool in early 2020 and follows companies in the healthcare sector. Formerly a researcher in the biotech industry, he leverages his science background in his work as a writer and entrepreneur. His interests include exploring his hometown of Boston, travelling in Latin America, and value investing.

Fitbit (NYSE:FIT) is a household name in the fitness market thanks to its simple but effective exercise-activity trackers. With a roster of products including smart watches and wristband activity trackers, Fitbit's offerings record health metrics including heart rate, distance travelled, and steps walked. Most of Fitbit's activity trackers cost between $100 and $175; the company's most recent tracker, the Fitbit Charge 4, cost $149 upon its release in March.

With Fitbit's looming acquisition by Alphabet (NASDAQ:GOOG), many investors are wondering what makes the company special enough to warrant a purchase by the tech giant. In short, Fitbit is interesting because it's a health-data company disguised as a consumer fitness product company. 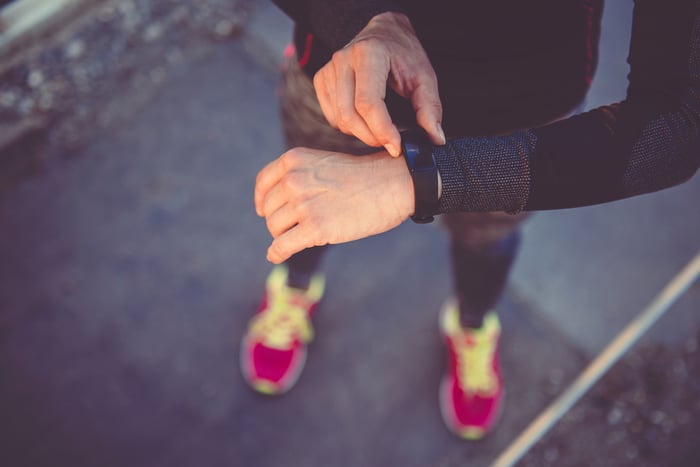 More than 28 million people worldwide use Fitbit products on a daily basis, meaning that the company has a treasure trove of health and exercise data which it appears to be struggling to monetize while honoring its commitments to customer privacy. Some of its wristband trackers have the technical capability to measure blood oxygenation, but due to regulatory obstacles, the company hasn't allowed its customers to use the feature so far. Nonetheless, Fitbit recently started to conduct large-scale, opt-in studies on whether its products can detect medical issues like atrial fibrillation despite being designed for more mundane monitoring.

While it is unclear whether the company's primary customer demographics will ever benefit from the results of the studies, Fitbit's interest in vetting the capabilities of its devices may point to a future product line that emphasizes medical sensors rather than fitness-tracking sensors alone. Either way, Fitbit's commitment to conducting large-scale investigations of its customer data and its frequent product-hardware updates indicate that the company consistently seeks to develop new products in response to the needs of its customers.

As an investment, however, Fitbit leaves a lot to be desired. Fitbit's profit margin of negative 16.4% and plummeting year-over-year quarterly revenue growth of negative 30.8% are problematic. To make matters worse, the company reported a 26% drop in year-over-year sales in the first quarter of this year, well before the economic impact of the pandemic began to take shape. Furthermore, Fitbit's stock price has dropped more than 70% since its IPO in 2015 and shows few signs of recovery, and the company has no intention of offering a dividend in the foreseeable future.

Will Alphabet's acquisition pan out?

Since Alphabet proposed that it would acquire the company for $2.1 billion in cash in late 2019, Fitbit has faced increasing concerns about its handling of customer data. As the nature of Fitbit's business is to track and derive insights from customer health data, many customers may bristle at the prospect of Fitbit's retained health data becoming Alphabet's. Likewise, the deal for Fitbit is expected to close in 2020, but American and European regulators have yet to give Alphabet the green light to move forward with the deal due to the privacy issues involved.

If Alphabet is allowed to buy Fitbit, the company's unprofitability would no longer be a concern thanks to the value of its health data hoard. On the other hand, if the deal falls through, Fitbit will be back in the same position it has held for the last five years, wherein monetizing customer data does not provide the company with enough revenue to survive in the long term. Thus, investors should take care to approach Fitbit as a risky and speculative stock -- at least until it can demonstrate either reliable revenue growth or profitability.