Investing in growth stocks can enhance your portfolio. These stocks tend to be more popular than plain old dividend stocks because growing businesses also tend to rise in value. Plus, the capital appreciation you can gain from investing in a top growth stock can often be much more than the recurring income you'll earn from a dividend stock.

But picking a growth stock that can consistently deliver strong results is no easy task. Below are three companies that have produced impressive results of late and that still have lots of potential.

Valens (OTC:VLNCF) may not be one of the big pot stocks in the industry just yet, but it's taken every step to get on investors' radars. In each of its last three quarters, Valens not only recorded a profit, but also generated strong growth. 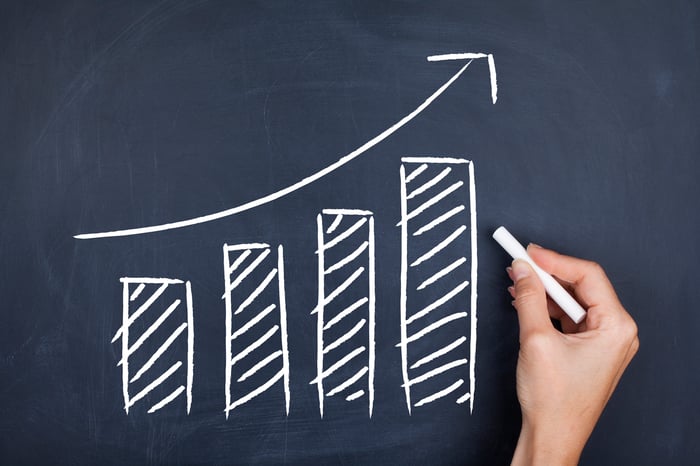 On April 14, the company released its first-quarter results of fiscal 2020. Sales of $32 million Canadian dollars were up from just CA$2.2 million in the prior-year period. The top line was a 4.4% improvement from the fourth quarter, and 94% higher than the third. This represents 263% growth the CA$8.8 million that Valens brought in during the second quarter.

Valens is still in its early growth stages, so the high percentages may be a little misleading. That shouldn't take away from the impressive numbers the company has generated of late. That Valens is still getting more products out into the market is particularly exciting, as that means it's likely to drive even more revenue growth this year.

The British Columbia-based company noted in its quarterly release that there are 25 SKUs in its pipeline across five product lines. They include vape pens, concentrates, edibles, beverages, topicals, tinctures, and capsules. With many different products hitting the markets this year, Valens' numbers could look even better.

This cannabis stock could quickly grow -- which is why it would be smart to buy it before it gets big.

Snap (NYSE:SNAP) could soon become much more popular with ad buyers thanks to Facebook, which is coming under fire from fed-up clients. Critics say the company isn't doing enough to keep hate and disinformation off its platforms.

The end result may be that some of Facebook's customers end up spending their advertising dollars elsewhere. That's where Santa Monica-based Snap comes in. Snap is a camera company. While it may not be a Facebook replacement, it's still an oft-used platform for young people to communicate and share stories. Its popularity and youthful audience carry a lot of value with ad buyers.

It also helps that Snap's been growing its user base consistently in recent quarters, making it more appealing to advertisers. In the company's first-quarter results, released April 21, it reported average daily active users of 229 million. That was up 5% from Q4, and represented a 20% increase from the prior-year period.

Sales in Q1 also grew by an impressive 44% year over year, reaching $462 million. Over the trailing 12 months, the company's top line totaled $1.9 billion, up 46% over the same period a year ago. The bottom line has been a bit underwhelming for investors, however, as Snap has posted a loss every year.

Square (NYSE:SQ) is another high-growth stock that investors should consider adding to their portfolios. In its first-quarter results May 6, Square reported net revenue of $1.4 billion -- a year-over-year increase of 44%. In 2019, Square reported revenue of $4.7 billion, or a 43% increase from the year prior and more than double the $2.2 billion the company recorded in 2017. This past year was also the first time Square posted a profit, with a net income of $375 million.

What's most exciting about Square, however, is that the company's business is evolving to become more diverse and versatile. In Q1, Bitcoin revenue of $306 million accounted for 22.2% of the company's net revenue. A year ago, that percentage was just 6.8%. Transactions make up 54.9% of Square sales, while subscriptions and services represent 21.4% of the top line. Hardware sales are about a modest 1.5% of revenue.

The company's future growth won't come without challenges. In an update from March 24, Square acknowledged that gross processing volume in its seller ecosystem was beginning to slow amid the COVID-19 pandemic. Still, with many paths forward and various revenue streams contributing to its top line, the company is in good shape to continue growing despite this adversity.

Let's take a quick look at how these stocks have performed so far in 2020: 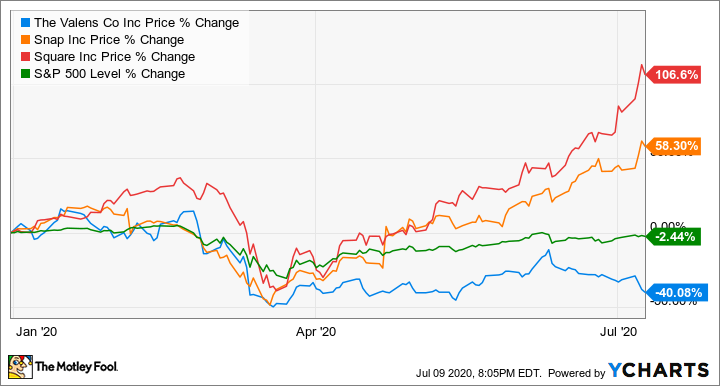 Only Valens' stock isn't beating the S&P 500 this year. But even with a worse performance, the pot stock may be a better buy given its more modest price-to-sales valuation: 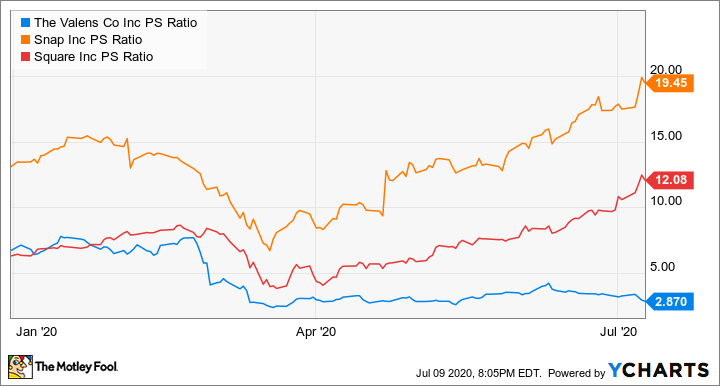 Investors are paying much larger premiums for both Snap and Square today. Valens is a bit of an underrated buy, but with strong growth, profits in three straight quarters, and a cheaper valuation, the cannabis company is the better choice of the three.