NextEra Energy's focus on renewable energy helps it stand out from the crowd.

Utilities don't usually come to mind as an exciting investment -- but NextEra Energy (NEE -2.91%), among other U.S. utilities, is busting that stereotype. Its focus on renewable energy and innovation has paid off handsomely for itself and its shareholders over the last 10 years, as the company gets ever closer to turning sunlight and wind into, well, essentially free money. 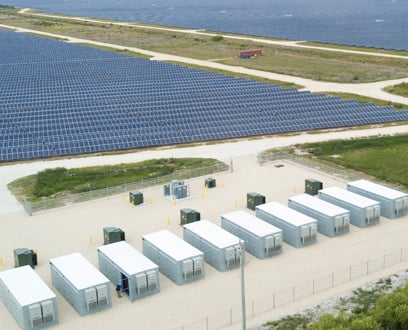 How an electrical utility makes money

Utilities make money by generating and selling electricity. Because starting and running a utility requires massive investments in equipment, like generators and transmission lines, the utility must spread out those costs across many customers. So having many small utilities compete for customers would push electricity's prices up, rather than down. This makes utilities "natural monopolies," capable of potentially charging "whatever the market can bear" for their product and raking in outsize profits. But in utilities' case, governments usually intervene, capping how much a utility can charge its customers.

There are three parts to every utility's profits: How much money it brings in (revenues), stacked up against the costs that don't change (fixed costs, like those transmission lines and generators we mentioned), and the costs that do (variable costs, like the price of the fuel it uses to generate energy). Those fixed costs aren't going anywhere, and the government caps how much utilities can hike prices to amass more revenue. That means cutting fuel costs is the only way utilities can earn fatter profits. But since utilities can't control market prices for fossil fuels like coal and gas, they've traditionally struggled to reduce their fuel costs over time.

But what if a utility could "zero out" its fuel costs? Sunlight and wind are free, right? In theory, renewable energy could drive a utility's fuel costs down to zero -- and increase its profits proportionally.

Renewable energy and the promise of an exciting utility

NextEra appears to have caught wind of this idea early on. One of the largest utilities in the U.S., it has been a pioneer in renewable energy since the purchase of its first wind farm in Oregon in 1998. Since then, it has gone on to become one of the top three generators of energy from renewable sources in the U.S. and No. 4 in the world.

A look at NextEra's income statements since 2010 confirms how its investment in renewables has played out over time. In the first quarter of 2010, NextEra Energy (then called FPL Group, Inc.) spent almost exactly 50% of its operating expenses (or OPEX) dollars in fuel. By Q1 2020, its fuel cost was down to around 30% of OPEX, pushing its gross margins from the low 60%s to above 80%: 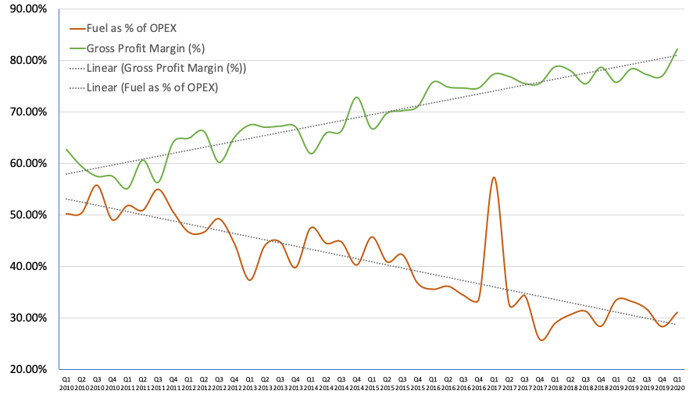 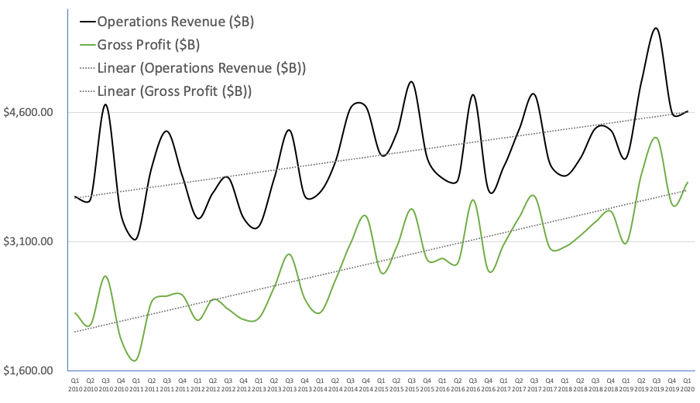 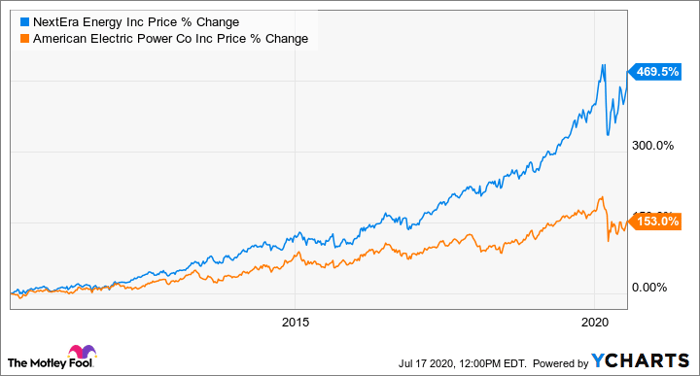 A story to be continued

Until recently, though, a utility could not drive its fuel cost down to zero by going 100% renewable. The sun is only available during the day, and wind doesn't blow all the time -- so fossil fuels have been an important part of the generation matrix.

Enter energy storage -- also known as batteries. Storage could provide renewable energy 24/7 -- if utilities can deploy it affordably. A recent study by the National Renewable Energy Laboratory predicts that the price of storage will fall by 50% over the next 10 years. As a result, utilities and end users worldwide are increasingly investing in storage. And NextEra, once again, is leading the way. With 140 megawatts of storage already built, it claims to be the largest adopter of energy storage technology in the U.S. as of this writing.

Lots more storage may be on the way. In its third-quarter 2019 earnings call, NextEra announced a pipeline of more than 12 gigawatts of solar projects, more than half of which would be paired with storage. And in its Q1 2020 earnings call, the company doubled down on its commitment to storage, projecting an investment "expected to exceed $1 billion" in storage in 2021 alone, making it potentially the first company worldwide to cross that milestone.

As NextEra continues to lead the U.S. and the world in deploying renewable energy and storage technology, it will likely keep growing its gross profits and earnings as it brings its fuel costs close to zero.

Can NextEra make money for nothing? If it stays its current course, it might get close. Investors should keep a careful eye on its gross margins, and its fuel costs as a percentage of OPEX, to see whether this utility stock gets even more exciting.