Investors were optimistic that iRobot (NASDAQ:IRBT) would reveal strong operating trends in its second-quarter announcement this week. The robotic cleaning device specialist issued a positive sales update just a few weeks ago, which predicted a return to sales growth and profitability following its brutal start to fiscal 2020.

But iRobot's actual results surpassed those high expectations in a few categories, including demand for premium robots and inventory levels heading into the critical holiday shopping season. 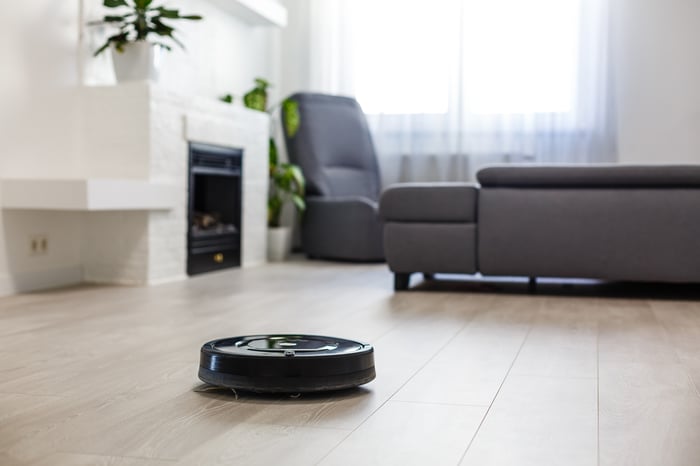 Sales landed at $280 million, which translated into an 8% increase year over year. That uptick was a welcome sight for shareholders who had endured last quarter's 19% revenue slump. The boost also exceeded the high end of the upgraded guidance that CEO Colin Angle and his team issued back in June. "Demand strengthened meaningfully during the quarter," Angle explained in a press release while citing increased consumer focus on home-cleaning products during the COVID-19 pandemic.

iRobot credited demand for its premium products as a key pillar of support for that growth rebound. Priced at over $500, these vacuum and floor-mopping devices enjoyed a 43% sales spike this quarter. That success pushed the company's average selling price up to $307 compared to $296 a year ago. It also allowed revenue to rise even through the total volume of sales ticked lower when compared to last year.

Investors might be even more pleased with the progress iRobot showed on its finances. Selling and manufacturing expenses declined, and gross profit margin increased. The combination of those two positive factors helped push operating margin up to 14.5% of sales compared to 6% a year ago. As a result, iRobot nearly tripled its earnings after having warned of a potential sizable Q2 loss just three months ago.

"Our return to operating profitability," Angle said, "reflected the combination of higher revenue, notable improvement in our gross margin, and disciplined expense management."

iRobot is entering the riskiest part of its fiscal year: the time when retailers begin making their key stock-up decisions for the holiday season. This period threatens to be more volatile than usual, thanks to weakening economic trends and the company's uncertain status on exclusion from Chinese import tariff charges.

However, management has seen enough data to change its tone on the current fiscal year. iRobot now believes sales will likely climb slightly in 2020, rather than shrink. The company is also aiming to achieve solid operating profitability, although the scale of that success might depend on whether it receives another tariff exclusion on imported merchandise.

The good news is that iRobot is entering its core selling period with some major advantages, including a lower expense structure, light inventory holdings, and some clear market share winners in its lineup of premium cleaning devices.

Those assets suggest that shareholders will see modest sales growth this year, paired with significantly higher profitability. And that outlook represents a positive shift from the bleak forecast most investors had for the business following its late April earnings report.