Let's face it: The shares of many companies with coronavirus programs are priced at nosebleed levels. Investors have flocked to several small stocks with promising experimental COVID-19 therapies or SARS-CoV-2 vaccine candidates.

The picture isn't quite as bad among large-cap companies working on the coronavirus problem. Even among those, though, valuations can be high. But there's one big coronavirus stock that gives you the best bang for the buck by far. That stock is none other than Gilead Sciences (NASDAQ:GILD). 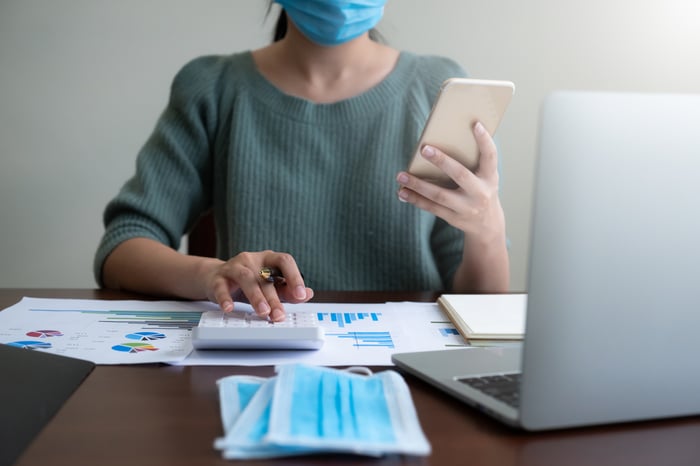 Just look at the valuations of some of the major drugmakers with COVID-19 programs. AstraZeneca stock trades at 31 times expected earnings. Eli Lilly and Regeneron both sport forward earnings multiples of nearly 25. Johnson & Johnson? It has a forward price-to-earnings ratio of 19. Pfizer is a relative outlier with its shares available at a little under 13 times expected earnings.

Even Pfizer doesn't quite match up with Gilead for a low valuation, though. That biotech stock appears to be a bargain with shares trading at only a little over 12 times expected earnings.

It appears even more attractive when you factor in its longer-term growth prospects. Any stock with a price/earnings-to-growth (PEG) ratio below 1.0 is appealing. Gilead's PEG ratio currently stands at 0.56.

However, there's one potential pitfall with using forward earnings multiples and PEG ratios. Both rely on projections of what a company's earnings will be in the future. These projections can be wrong. But Gilead Sciences really should be able to deliver solid growth for years to come.

Sure, the biotech faces some challenges. Sales of its angina drug Ranexa have practically evaporated in the face of generic competition. Pulmonary arterial hypertension drug Letairis is rapidly losing market share. Gilead's hepatitis C virus franchise continues to struggle. Sales for several of its older HIV drugs, notably including longtime leader Truvada, are declining as well.

But those problem spots don't outweigh Gilead's bright spots. For example, one primary reason why the older HIV drugs' sales are slipping is that they're losing market share to Gilead's newer HIV drugs, especially Biktarvy. Some analysts had predicted that Biktarvy would reach peak annual sales of $6 billion. However, it's on track to easily top that level in 2020.

While several of the other major drugmakers hope to eventually achieve success with their COVID-19 programs, Gilead is already well on its way to success with remdesivir. The antiviral has already been approved as a COVID-19 therapy by regulators in Europe and Japan, and it's available in the U.S. under the FDA's emergency use authorization. I think that Gilead should be able to make in the ballpark of $3 billion annually from remdesivir in treating hospitalized patients with COVID-19, at least over the near term. Obviously, the market could be changed significantly by the arrival of a highly effective vaccine.

The revenue opportunity could be significantly larger if an inhaled version of remdesivir now in an early-stage clinical study proves to be successful. That variant could be prescribed to COVID-19 patients outside of a hospital setting.

Meanwhile, Gilead awaits U.S. and European approval for filgotinib in treating rheumatoid arthritis. Estimates vary for how much the drug could generate in peak sales for RA and other immunology indications. However, Gilead seems likely to have another mega-blockbuster on its hands.

Then there's the rest of Gilead's late-stage pipeline. The company hopes to earn another approval for Yescarta as a second-line treatment for diffuse large B-cell lymphoma. It's waiting on the FDA's decision on KTE-X19 as a treatment for mantle cell lymphoma. Magrilomab is in phase 3 testing as a potential treatment for myelodysplastic syndromes. The biotech also has a couple of late-stage programs targeting fibrotic diseases. And it could have another HIV game-changer on the way with long-acting therapy lenacapavir.

Although Gilead looks to provide the best bang for the buck among large-cap coronavirus stocks right now, the bang isn't guaranteed. If Gilead doesn't win regulatory approval for its key treatment candidates, particularly filgotinib, its growth prospects would be seriously dented. And while the chances of full FDA approval for remdesivir seem very good, the process is never a slam dunk.

Of course, most of the other stocks with COVID-19 programs face their own risks. I like Gilead's odds. With a dividend that's currently yielding close to 3.5% thrown into the mix, my view is that the biotech will deliver market-beating total returns over the next decade.