This year has not been kind to companies with weak balance sheets. Fallout from the COVID-19 pandemic has triggered bankruptcies in many market sectors, with particularly heavy tolls on brick-and-mortar retailers and oil producers. Entire countries like Zambia and Suriname are running the risk of not being able to pay their government debts. I mean, it's been brutal.

And we're not done yet. Plenty of companies stand at the brink of bankruptcy today. Another wave of coronavirus lockdowns could tip them over the edge, and they're also vulnerable to more company-specific business risks.

I'm not saying that both of the companies below are going to file for Chapter 11 bankruptcy protection in 2020, with or without additional COVID-19 lockdowns, but I also wouldn't touch their stocks with a 10-foot pole this year. Too much risk, not enough reward. 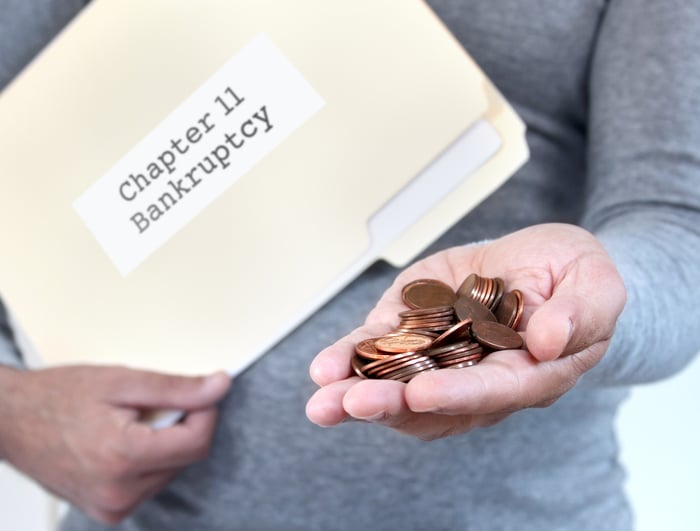 A bankruptcy filing doesn't necessarily mean the end of the business. Some companies restructure their debts and come back stronger a couple of years later. But even then, holders of the original stock often see their shares become worthless and replaced by a new ticker and different shareholders.

Game on if you can

Video game retailer GameStop (NYSE:GME) entered 2020 in a precarious position. The company is battling direct digital downloads and online stores for a share of the gaming hardware and software market, and the last generation of video game consoles is getting long in the tooth.

A fresh batch of gaming systems from Microsoft and Sony was always the saving grace for the road ahead. Gamers will absolutely pick up the new hardware from any store that happens to have some in stock, and many system sales are bundled with additional games and accessories to sweeten the deal for the retailer.

GameStop's sales have been trending downward over the last decade. The launches of Xbox One, PlayStation 4, and Nintendo Switch gave the company a brief reprieve in 2014, but that sales boost didn't last for long: 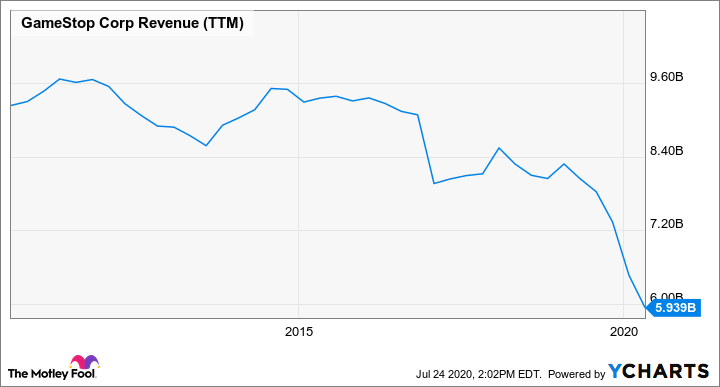 This holiday season's console launches may keep GameStop alive for a while, but the company has to make it that far in the first place. Halting ordinary retail operations on a massive scale would make it hard for GameStop to make its payments for fixed costs like store leases and interest on its $552 million of long-term debt. And to be honest, I don't expect the console refresh cycle to keep the lights on at GameStop for the long haul.

This company was in deep trouble before the virus crisis arrived and will have to make some drastic changes to its business model if it wants to stay afloat.

It's the end of Land's End as we know it

Upscale clothing and home goods retailer Land's End (NASDAQ:LE) is another obsolete business running on its last legs into the coronavirus buzzsaw of 2020. Credit-ratings specialist Moody's downgraded Land's End's probability of default rating (PDR) to a junk-level Caa1, with a negative outlook in June. The company's short-term liquidity rating was set to SGL-4, which is the lowest rating in Moody's liquidity system. In other words, Land's End is highly unlikely to fulfill the requirements of its loans.

The company added more weight to that concern this week. Land's End needs to refinance a $384 million term loan before it's due in April, 2021 because it can't afford to simply pay it off from cash reserves and ongoing operations. The poor credit rating is making it harder to find a new loan with reasonable terms, and Land's End's auditors have "substantial doubt" that the company will stay in business beyond that dreadful maturity date.

This bankruptcy would occur in early 2021, but the seeds were sown long ago. Sears mogul Eddie Lampert owns 65% of Land's End's stock and largely runs the business as he sees fit.