Shares of National Oilwell Varco (NYSE:NOV) had tumbled more than 13% by 12:45 p.m. EDT on Tuesday. Weighing on the oil stock was its disappointing second-quarter results.

Cratering crude prices during the second quarter had a significant impact on National Oilwell Varco's financial results. The oilfield equipment maker's sales tumbled almost 30% year over year to $1.5 billion. Meanwhile, it reported a loss of $0.24 per share, which was $0.07 worse than analysts expected even though it exceeded its cost reduction targets. 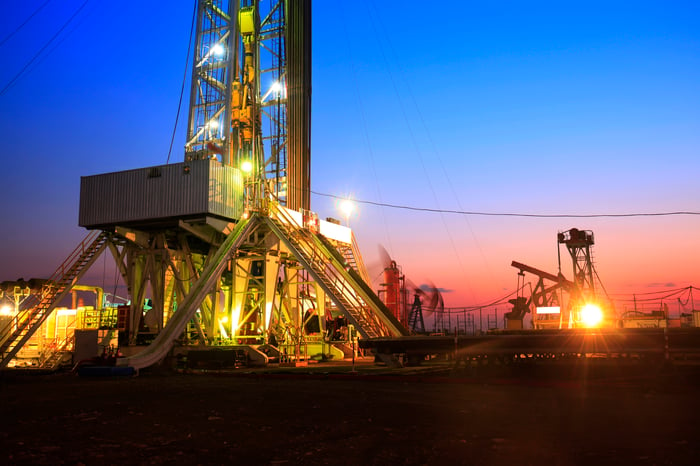 National Oilwell Varco noted that industry conditions during the period were absolutely brutal. There was virtually no demand for drill pipe repairs, and customers were cannibalizing parts on idled assets to save money. It also noted that demand for fiberglass and composite pipe experienced a sharp decline as North American oil and gas orders virtually ceased. The company also had trouble sourcing supplies overseas due to COVID-19 shutdowns of shipping vessels and manufacturing plants.

While the company expects fewer disruptions related to COVID-19 in the third quarter, oil market conditions remain challenging as low prices have prevented producers from putting drilling rigs back to work. Because of that, it expects wellbore-technology revenue, which tumbled 48% year over year and 36% sequentially during the second quarter, to decline by another 10% to 15% in the third quarter.

Most oil companies stopped drilling and completing new wells as oil prices cratered earlier this year, hurting demand for equipment. While prices have bounced back from their bottom, producers haven't started bringing back idled rigs. Because of that, it could be quite awhile before National Oilwell Varco's results start recovering, which could keep the pressure on its stock price.