No one can complain about Teladoc Health's (NYSE:TDOC) performance so far in 2020. Business is booming for the telehealth services leader. Its share price has skyrocketed more than 150% year to date.

But that momentum was put to the test as Teladoc announced its second-quarter results after the market closed on Wednesday. Here are the highlights from the company's Q2 update. 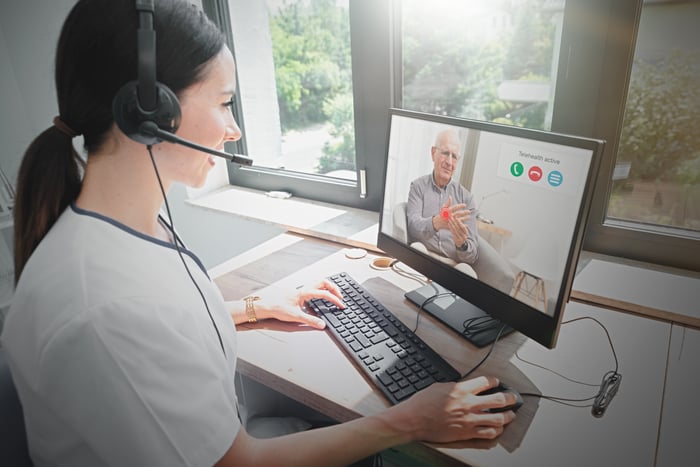 Teladoc announced Q2 revenue of $241 million, an 85% jump from the $130.3 million reported in the same quarter of the previous year. Its reported revenue was also higher than the average analyst revenue estimate of $220.7 million.

Teladoc ended the second quarter with cash, cash equivalents, and short-term investments of $1.31 billion. This was a huge increase from the $517.1 million on hand as of the end of 2019.

Teladoc stated that the U.S. lockdowns and shelter-in-place orders in May and June "provided visibility into continuing demand for virtual care, with utilization stabilizing at a level 40% higher than before COVID." This doesn't appear to be only a temporary boom, though. Teladoc Health CEO Jason Gorevic said, "In some states where the curve has flattened, we are still seeing twice as many patients as last year."

While Teladoc missed Wall Street's Q2 bottom-line estimate, the miss wasn't quite as bad as it appears. The company's net loss included a $0.10 impact resulting from its May 2020 convertible debt offering. This offering generated net proceeds of around $829 million, which explains Teladoc's improved cash position.

Teladoc Health projects Q3 revenue will be between $275 million and $285 million. The low end of this range is nearly 27% higher than the consensus Wall Street revenue estimate for the third quarter. Teladoc expects to report a net loss in Q3 of between $0.35 and $0.30 per share. The average analyst estimate is for a Q3 net loss of $0.26 per share.

For full-year 2020, Teladoc anticipates revenue will be between $980 million and $995 million. It looks for a net loss of between $1.45 and $1.36 per share. As was the case with its Q3 guidance, Teladoc's full-year outlook was higher than analysts' estimates on the top line but missed bottom-line expectations.

Revenue growth could slow down next year. Teladoc thinks that it will be able to deliver year-over-year revenue growth in 2021 of between 30% and 40%. But Teladoc's preliminary 2021 outlook doesn't factor in the possibility of more acquisitions. It's also possible that the COVID-19 pandemic could continue to be an even bigger and more prolonged catalyst for the healthcare stock than is expected right now.