Amazon's rapidly expanding its fulfillment network footprint. But its blowout second-quarter results may foretell another capacity issue. Amazon customers might face slower shipping speeds and out-of-stock issues, as they saw in March and April.

Olsavsky said Amazon will have about 50% more warehouse and fulfillment center space by the end of the year. Most of that capacity will ramp up over the next few months as Amazon prepares for a delayed Prime Day and holiday shopping in the fourth quarter. Still, the growing capacity might not be enough to get Amazon fully up to speed with its demand in the third quarter. But the aggressive expansion indicates that management expects the increased demand to persist through the rest of the year. 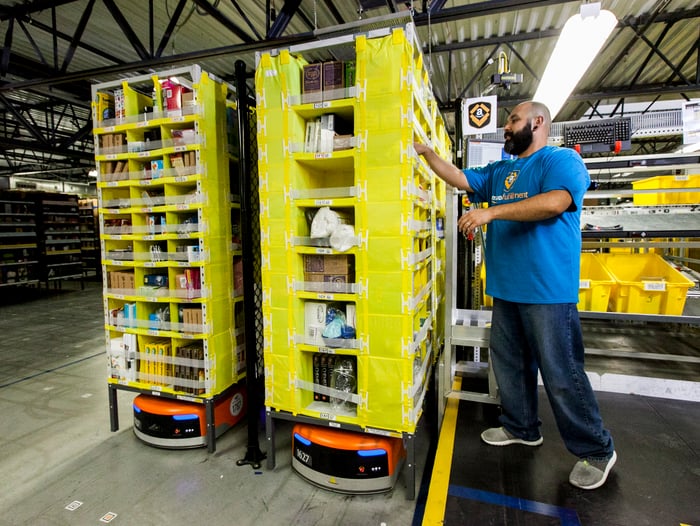 Building up inventory for the fourth quarter

For context, here's a fuller version of Olavsky's introductory quote: "As we move into Q3, we need to build the inventory more for Q4, and we've run out of space."

What that means is that, while Amazon's adding a lot of capacity to its warehouses, much of that capacity will be used to stock inventory the company plans to sell during Prime Day or the holiday shopping season in the fourth quarter. If it didn't build capacity ahead of time, it would miss out on valuable sales during the competitive fourth quarter.

But that means sacrificing some of that capacity in the near term. Olsavsky's outlook for the third quarter calls for revenue roughly in line with what the company saw in the second quarter. Amazon typically sees a sales uptick in the third quarter.

While this year is certainly abnormal, Olsavsky mentioned that its ability to fulfill orders quickly in July was still behind where it was at the start of the year. That is to say, demand still exceeds its capacity to fulfill orders and get them out the door fast enough to meet its one-day shipping promise. That's despite its expanding footprint.

Amazon's capacity constraints are further pressured by an influx of Prime memberships. Olsavsky said the Prime member growth rate accelerated in both the U.S. and worldwide, helped by improved subscriber retention throughout the quarter.

Olsavksy also noted that Prime members are ordering more often and putting more in their virtual carts. That means Amazon's limited fulfillment capacity is getting pushed to the limit as a larger percentage of orders qualify for Prime shipping benefits.

The accelerating growth in Prime membership also helps explain Amazon's decision to delay Prime Day. With more Prime members shopping on Amazon already, Prime Day is likely to see record-breaking numbers of orders. It needs to ensure that it has inventory in stock and that new warehouses are running at full capacity before it opens the floodgates.

A drag on third-quarter profitability, but the fourth quarter could be huge

But as Amazon ramps up capacity with strong expected demand, its profits could return to the levels it saw in the last quarter. And if COVID-related expenses continue to decline, operating margin could come close to double digits in the fourth quarter. If you remove the $4 billion in COVID-related expenses from Amazon's second-quarter results, its operating margin would've been 11%. "Is Jeff [Bezos] aware of how profitable the company is becoming?" RBC Capital analyst Mark Mahaney joked on the earnings call.

The retail company will seek to maximize its capacity in the fourth quarter, starting with Prime Day and pushing into the holiday shopping season. It could spur further growth in Prime memberships and greater spending from merchants on its search advertising products, which would further benefit its top line.

That said, Amazon could start spending more on marketing again to make the most of its freshly stocked fulfillment centers. Amazon pulled back on those considerably last quarter. Overall, however, the massive capacity increase and continued lag in shipping speeds indicate that Amazon expects a blowout fourth quarter, and that could push profitability even higher. And as marketing spending returns to normal levels next year, Amazon could see continued strong growth throughout 2021.