The S&P 500 Index (SNPINDEX:^SPX) gained 21.3 points, or 0.64%, on Aug. 5, as earnings season moves through one of the busiest weeks. So far there have been few big earnings surprises; the second quarter of 2020 saw the U.S. plunge into the deepest recession in history, so the expectations have been relatively low for many companies.

Walt Disney (NYSE:DIS) is an excellent example; only in 2020 could the company report a $4.7 billion loss and see its stock price surge nearly 8% the next trading session. Similarly, optimism abounds for the airline industry. Shares of American Airlines (NYSE:AA) gained 9.5% today, joining the rest of the S&P 500's airlines higher on hopes for another round of federal government support. Aerospace giant Boeing (NYSE:BA) shares were up 5.6% on the day, following good news on its own access to capital.

In other notable news, CVS Health (NYSE:CVS) reported earnings before market open today, delivering solid results and raising full-year guidance, but questions about increased expenses and how its profits will be affected post-COVID-19 had investors selling. 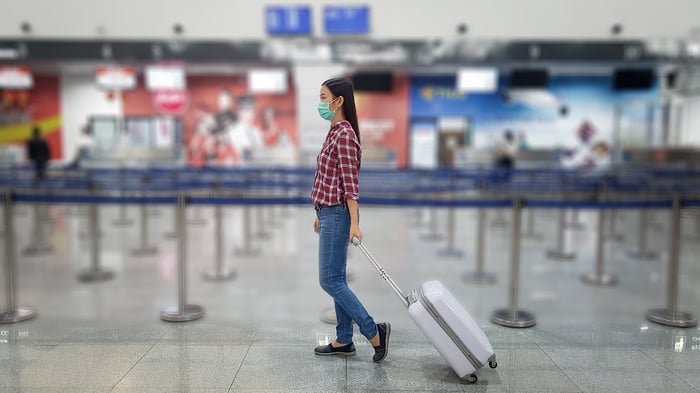 The House of Mouse reported earnings after market close yesterday, announcing a $4.7 billion loss and a 42% drop in revenue. But investors expected that -- Disney's theme parks and many movie theaters have been closed for months due to the coronavirus pandemic -- so the focus was on the company's pivot to streaming services.

Disney+ ended the quarter with almost 58 million subscribers, and by the time of the earnings call, CEO Bob Chapek said that number was over 60.5 million. For context as to how wildly successful the streaming service has been, Disney's internal projections called for Disney+ to reach that many subscribers by 2024, not a bad jump on the market. Moreover, when you include Hulu and ESPN+ in the mix, Disney's paid streaming subscriber base is now more than 100 million.

The media giant plans to accelerate its streaming growth. Next up, it's targeting more international markets, announcing plans to expand international streaming under its Star brand in the near future.

With the industry on track to furlough nearly one-third of its workforce when the last round of funding expires, investors are, for today at least, feeling hopeful that elected officials will feel the pressure to act in an election year. Barring additional government cash, the industry will have to cut costs -- primarily payroll -- to avoid insolvency as the downturn in air travel continues.

Separately, Boeing shares gained over 5% on the day, following news that the aircraft manufacturing giant has secured enough cash of its own to ride out the downturn. A company executive said the $25 billion in bonds Boeing sold this spring should give it the necessary capital to ride out what is expected to be a multiyear downturn in global aviation.

Boeing entered into the coronavirus pandemic that's crippled the airline industry with plenty of problems, primarily the grounding of the 737 MAX following two deadly crashes. As things stand today, the company is still working to get the 737 MAX recertified for flight, but with the industry still deep in a crisis that has already caused bankruptcies, demand for new aircraft is likely to be muted for several years to come.

One of the largest pharmacy and healthcare benefits companies on earth, CVS has seen the COVID-19 pandemic affect its business in multiple ways. The company reported a small decline in front-store (non-pharmacy) retail sales, and relatively flat pharmacy services revenue. But due to the increase in membership in some of its healthcare benefits services, including its Aetna health insurance subsidiary, and lower medical costs with many elective procedures being delayed due to the pandemic, CVS reported a massive increase in profits. Net income was $3 billion, up 58% year over year.

Looking forward, however, those delayed elective procedures will come forward, and investors seem to be expecting CVS Health's earnings growth will be slower going forward.