The S&P 500 Index (SNPINDEX:^GSPC) closed on Friday relatively flat, up less than one-tenth of one percent. But while the index as a whole finished close to even to end the week, the vast majority of stocks in the index finished higher. The outsize influence of Apple Inc (NASDAQ:AAPL), Microsoft Corp (NASDAQ:MSFT), Amazon.com Inc (NASDAQ:AMZN), and Alphabet Inc (NASDAQ:GOOGL)(NASDAQ:GOOG), all of which finished lower today and have a combined market cap of $6.24 trillion, weighed on the index's gains. 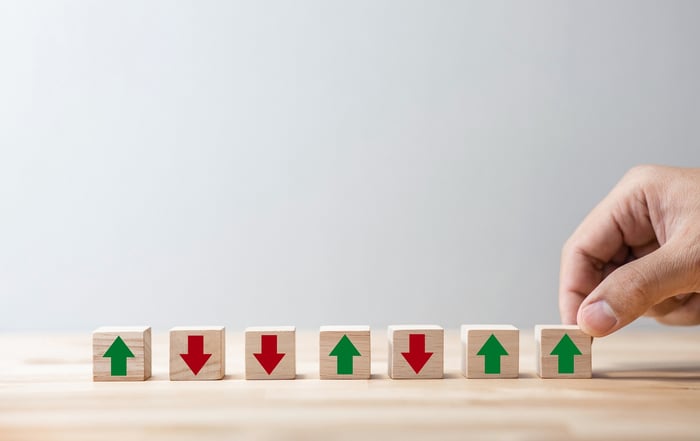 2020 has been a pretty great year overall for the four biggest companies, all of which have handily outperformed the SPDR S&P 500 ETF Trust (NYSEMKT:SPY). 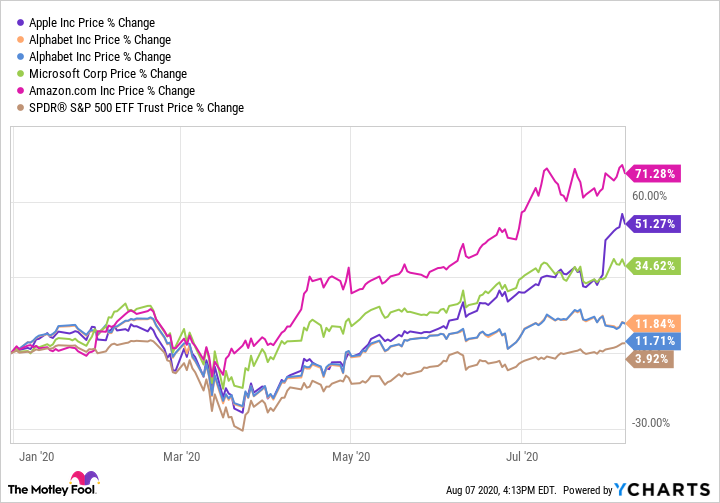 Today, investors gave back some of those gains. For Microsoft, the pressure is on to get a deal done to acquire TikTok's business in the U.S. and a few other regions, with President Donald Trump signing an executive order that essentially gives it 45 days to get a deal done. Investors may be less sure that a deal will be reached, or just less convinced that it will create value for Microsoft if one is reached.

Apple shares have gone up sharply over the past week, following news it was planning to do a 4-for-1 stock split. And while the move is largely meaningless in terms of any material change -- it just cuts the same pie into more pieces -- it will make its shares more accessible to investors working with smaller sums of money. Today, some investors could be selling out on the recent run-up.

Google parent Alphabet can cross one piece of litigation off the list, with former Google Plus users getting email notifications of a class action settlement. And while it's good the company can move beyond this, it's a small-potatoes deal that will cost the giant less than $15 million (not including legal fees). On the forefront now is an official investigation by the European Commission into the company's proposed acquisition of Fitbit (NYSE:FIT). The governing body has concerns about Alphabet adding to its fortress of tools to collect personal data, despite Alphabet's insistence that the acquisition is about hardware, not information.

While the economy is still in disarray, today's Department of Labor report offered reason for optimism. According to the report, employers hired a net of 1.8 million new employees in July, pushing the unemployment rate to 10.2%. That's a terribly high rate that would smash records in just about any other year, but it's much better than the peak of almost 15% nearly four months ago. It was also much better than expectations from economists, who were looking for 1.5 million new jobs on average.

As a result, more than 350 stocks in the S&P 500 Index closed higher on Friday. The gains were broad, including consumer discretionary goods makers and retailers like Hanesbrands, Kohl's, and TJX Companies (NYSE:TJX), financial services companies like Prudential Financial (NYSE:PRU) and Bank of New York Mellon (NYSE:BK), industrial companies like Wabtec (NYSE:WAB), and energy companies like Phillips 66 (NYSE:PSX), all of which gained more than 3% to finish the first week of August.

Shippers UPS and FedEx also saw big gains today, but not just because of the better-than-expected jobs numbers. UPS just announced it will add substantial surcharges on large shippers over the holiday season. The coronavirus pandemic is expected to make this the busiest season on record for e-commerce, putting big pressure on UPS and its peers like FedEx to -- literally -- deliver. Investors today are optimistic the move will lead to hefty profits come the holiday shipping -- that is, shopping -- season.

This optimism on the economy comes even as Congress struggles to move an additional stimulus forward. There are at least 15 million more Americans out of work now than in February, and the loss of the additional $600 per week in unemployment the federal government was paying expired at the end of July. For context, that's $9 billion per week in income those 15 million unemployed won't have to spend.

Earnings on deck: A weekend in the Berkshire (report)

Looking for some weekend reading? Warren Buffett has you covered, with Berkshire Hathaway (NYSE:BRK-A)(NYSE:BRK-B) announcing that it will post its second quarter 10-Q on Saturday, Aug. 8 at 8 a.m. EDT.

The Berkshire report is always highly anticipated reading, as the diversified conglomerate's operations are in a broad array of industries. The report will also set up investors for another important filing from Berkshire: quarterly investment disclosures -- the SEC form 13-F -- are set to release next week, giving us a closer look at the stock in Berkshire's massive equity portfolio.