Just a few points short of the record high reached in February, the index closed the week mixed as worries about the economy increase.

The S&P 500 Index (^GSPC -1.72%) finished trading on Friday about as close to flat as it gets, down barely more than one-half a point, or a minuscule 0.02%, to finish the week. It was nearly split down the middle on the number of stocks that gained versus fell. 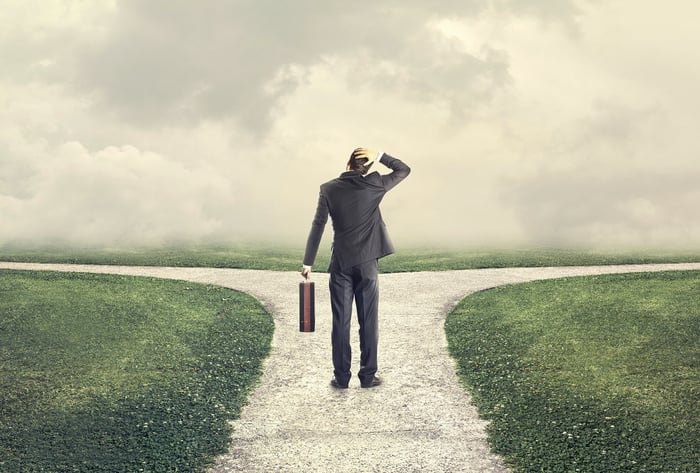 As a result, the S&P 500 Index finished at 3,372.85, just off the all-time high of 3,386.2, set on Feb. 19. Today's mixed results were the product of a relatively quiet news day, with earnings season winding down, and most of the recent economic data already baked into investors' expectations.

Good and bad have investors holding

This week saw some positives, with weekly unemployment filings falling below 1 million for the first time since the pandemic hit U.S. shores hard in March, while retail spending was relatively strong in July. But the overarching worries continue.

Coronavirus cases and the death toll continue to mount, while economists are concerned that even though new jobless claims have fallen, many of the more recent unemployment filings aren't furloughs, but permanent job losses. Factor in Congress' gridlock on a second round of economic stimulus for the 10 million Americans who have lost jobs this year, and investors have reason to not rush into stocks that have already priced in a quick recovery that may be losing ground to the coronavirus pandemic's impact on jobs.

Today proved an example of how investors are caught in the middle, unsure how to act, and not buying or selling in the extreme ways that have become seemingly normal since late February.

Worries over economic recovery are coming to a head

In the weeks and months ahead, investors can rest assured that politics will play heavily in the market's daily movements. With California Sen. Kamala Harris joining former Vice President Joe Biden on the Democratic ticket, the rhetoric is likely to ramp up as the campaigns move into high gear with the election looming in November.

When and whether leaders on Capitol Hill reach an agreement on economic stimulus will certainly impact investors. The economy (and investors) have benefited greatly from the additional financial support the federal government had been providing to the unemployed. But with that additional $600 weekly benefit now expired, and little progress on a replacement, there's more uncertainty that investors may start to price into stocks in the weeks ahead.

In July, consumer spending was very strong with retail sales up 1.2%, even with near-record levels of unemployment. But the loss of those federal dollars, which would be worth more than $9 billion per week to the over 15 million currently unemployed, is significant.

Earnings next week could answer some questions

Next week will give investors a lot of new data on the state of the consumer economy.

Among this group of companies, we will get more insight into how hundreds of millions of Americans are spending their discretionary funds, and some input from their management teams as to their expectations, as well as what they're seeing from their customers since the federal unemployment benefit has expired. Tune in for a closer look as the results start coming in.