Stocks rose last week with the Dow Jones Industrial Average (DJINDICES:^DJI) gaining over 1.5% and the S&P 500 (SNPINDEX:^GSPC) edging up about 0.6%. The S&P is now up 4% for the year and near its record high, while the Dow is still down 2% year to date.

Second-quarter earnings season continues in the week ahead with leading names in retail and tech set to announce their latest operating results. Below, we'll look at a few of the metrics in those reports that could send Home Depot (NYSE:HD), TJX Companies (NYSE:TJX), and NVIDIA (NASDAQ:NVDA) stocks moving over the next few days.

Expectations are running high for Home Depot's earnings report on Tuesday morning. The second quarter announcement covers the months of May, June, and part of July, so the retailer's sales likely benefited from surging demand for home improvement supplies while social distancing efforts were near peak levels. The chain's last report showed the pace of comparable-sales growth more than doubling as spending jumped in April. 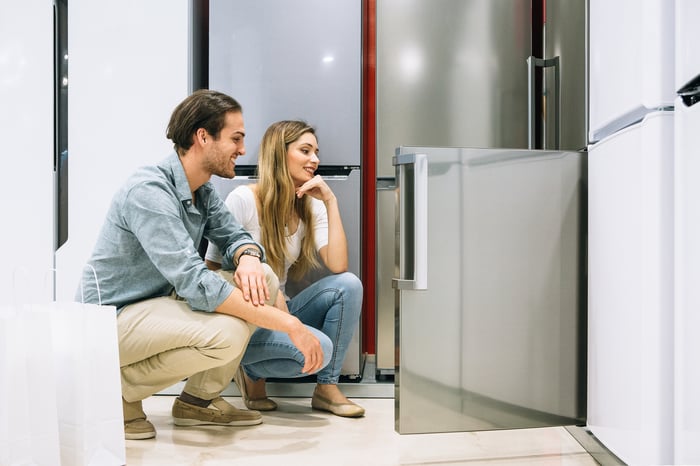 Investors will be stacking Home Depot's announcement up against rival Lowe's, which posts its results on Wednesday. Lowe's recently pulled ahead with comps up over 12% in its fiscal first quarter, and this week's reports will determine whether that trend is the start of a longer-term story. Meanwhile, look for both companies to issue cautious outlooks given collapsing economic growth rates in recent months and the potential for protracted headwinds due to the pandemic.

Off-price retailing giant TJX Companies has a low bar to pass on Wednesday morning. Its last earnings report synced up with maximum pandemic-related shutdowns in the U.S and Europe, leading to a 52% sales slump in the fiscal first quarter. Investors are looking for better news this week but one that will still point to a long road back to growth. Analysts expect revenue to decline another 33% year over year to $6.6 billion.

Customer traffic levels should continue to be pressured as people avoid in-person shopping trips for the foreseeable future. That situation might convince TJX Companies to put more resources behind its e-commerce platform, which is less robust than at national retailing rivals like Target.

Yet investors will be most interested in hearing what CEO Ernie Herrman and his team have to say about growth rates during the quarter as economies restarted and stores reopened. Good news here could combine with positive inventory trends to set TJX Companies up for a strong finish to an unusually bad fiscal year.

Computing chip giant NVIDIA will announce its latest results on Wednesday afternoon, and its surging stock price year to date suggests a high bar for this report. Shares have doubled in 2020 as the fiscal second-quarter announcement approaches.

NVIDIA's previous results gave investors plenty to feel excited about. Revenue spiked 39% overall, thanks mainly to standout results from the data center segment, which crossed $1 billion in quarterly revenue for the first time. "The demand is the strongest we've ever had in data centers," CEO Jensen Huang said in the late May earnings call.

Huang's initial outlook for the fiscal second quarter called for sales to land around $3.65 billion, and we'll learn this week whether that projection was a bit too cautious. The headline grabbing update this week will likely be NVIDIA's outlook, though, which should incorporate robust demand in areas like PC and console gaming for the second half of 2020.