The COVID-19 pandemic has disrupted normal travel flows, but it is unlikely to derail the transportation sector for long. There's a huge need to transport people and goods around the block, across the country, and all over the globe, and we rely on planes, trains, and automobiles to do the heavy lifting.

You'll find a wide variety of stocks under the transportation banner. Some new, some that have been around for more than a century. Some aspiring Dividend Aristocrats, and some that have never had a profitable quarter. 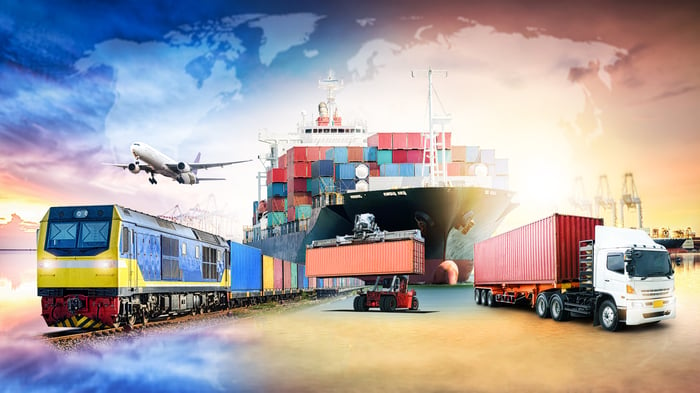 This locomotive is beginning to build speed

Wabtec has faced an uphill battle courting investors in recent years, weighed down first by its complex acquisition of the rail business of General Electric, then by concerns railroads are learning to do more with fewer locomotives, and more recently by worries that the pandemic would lead to questions about the viability of public transit expansion.

I believe those fears are overblown. The GE transaction is nearing full integration, and management expects to deliver the promised $250 million in annualized cost savings ahead of schedule. And although U.S. railroads are streamlining, most of that work is done. It appears likely that 2020 will be the low point for North American locomotive demand.

Even if it is not, Wabtec generates about 55% of its revenue outside of the U.S. and is well positioned to capitalize on international rail growth. And if there is any long-term impact on mass transit due to the pandemic, it could lead to the purchase of more equipment, not less, if extra spacing and separation is prioritized.

Wabtec said in late July that it expects full-year earnings of between $3.50 and $3.80 per share, providing potential upside to the $3.64-per-share analyst consensus. That implies Wabtec is managing through what I believe will end up being a bottoming-out year better than feared. 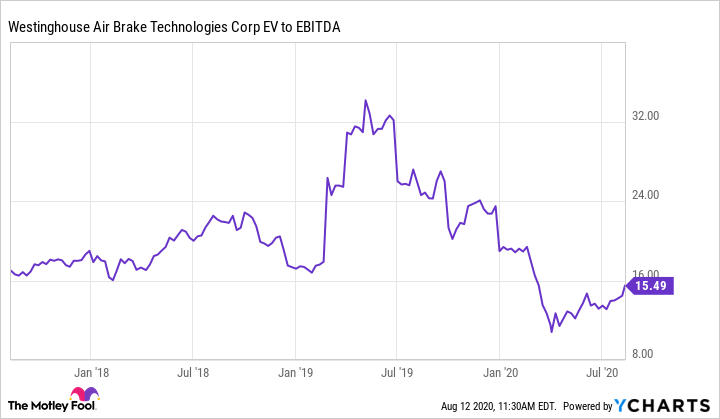 Wabtec today trades at an enterprise value 15 times earnings before interest, taxes, depreciation, and amortization (EBITDA), a discount to its average multiple over the last few years. Investors today have a chance to buy a top management team operating in an important sector of the economy at a discount.

Forget those electric-car start-ups, buy this dinosaur instead

John Rosevear (Ford Motor Company): What's this? Recommending a 117-year-old dinosaur at a moment when electric-vehicle start-ups are white-hot?

Yes indeed. Ford's stock has had a rough few years, but I think it's worth a close look now. Here are four reasons why.

A new CEO is incoming

CEO Jim Hackett is retiring, and rising star Jim Farley will take Ford's helm on Oct. 1. Farley brings a great resume; deep passion for Ford, autos, and the auto business; and strong communication skills that should help him improve in one area where Hackett arguably fell short: telling Ford's story to investors.

Former CEO Alan Mulally once told me that he thought of Farley as Ford's "secret weapon" because of his impressive business skills, intellect, and energy. He won't be "secret" for much longer.

The hard work of restructuring is mostly done

Hackett (and Farley) have already done a great deal to put Ford on a more profitable long-term path. The product line has been overhauled to boost margins, a slew of internal processes have been streamlined (making Ford more nimble), and the big investments in future tech like self-driving and electric vehicles are well underway.

In some ways, Ford is a turnaround play -- except that the foundation for the turnaround is already in place.

The all-new 2021 F-150 is just one of several new high-profile products that will arrive in Ford's showrooms over the next few quarters. Image source: Ford Motor Company.

Ford's stock price surged following the Great Recession, in part because it had several strong new products arrive in showrooms just as buyers returned. Now, with new products including the all-new F-150, the Bronco SUVs, and the electric Mustang Mach-E coming to market over the next few quarters, it could turn out to be ideally positioned to repeat that performance.

Ford cut its dividend, but it'll likely be back soon -- and it's a good one

Before the COVID-19 pandemic forced it to idle its factories in March, Ford paid a solid dividend of $0.15 per quarter. Ford is very likely to reinstitute that dividend as soon as it can, possibly late this year or early in 2021. That's a compelling reason to own the stock: At Ford's current stock price, that dividend would yield about 8.3%, making it a powerful growth booster when reinvested.

Long story short: Ford is a turnaround play that is now well positioned and ready to shine, it's a cyclical business trading near a cyclical low, and it's about to get an impressive new CEO. On top of that, it'll resume paying a good dividend, possibly within a couple of quarters. What's not to like?

The most glamorous stock in aerospace

Rich Smith (Virgin Galactic): I'm going to admit this straight out: I would love to own SpaceX stock.

The problem is, SpaceX is not a publicly traded company, and I don't know of a good way to invest in it (at least not directly). On the other hand, "spaceplane" company Virgin Galactic is traded publicly. In contrast to SpaceX, which has not IPOed and maybe never will, Virgin Galactic went public through a reverse merger last year and can be invested in today.

Despite profound misgivings about the company's lack of revenue and earnings, I'm giving serious consideration to buying at least a small portion of Virgin Galactic stock -- and I'll tell you why.

My belief that Virgin Galactic might be worth owning has little to do with Morgan Stanley's argument that the stock is worth $22 a share, when the stock costs only $18 today. (The analysis that went into that conclusion is nearly a year stale now in any case.) Rather, what has me interested in Virgin Galactic is the fact that in contrast to the many, many other companies that are attempting to take on SpaceX in the field of spaceflight, all of which are as starved for cash as they are for business, Virgin Galactic already famously has 600 well-heeled tourists signed up to ride on its spaceplanes -- and hundreds more clamoring for a chance to buy a ticket.

Whether Virgin Galactic's spaceflight tourism business will turn out to be profitable remains to be seen. We won't know the answer to that one for another few quarters, after the company has begun flying commercially to space. Nor do we know if its vaunted plan to offer hypersonic commercial travel will take off. But Virgin has cash coming in to finance the attempt, and access to more cash through secondary offerings of stock. No other space start-up has that advantage right now -- potentially an insuperable advantage for Virgin Galactic.

This, in a nutshell, is why Virgin Galactic is my favorite transportation stock right now.