Hasbro's (NASDAQ:HAS) been having a rough 2020. The top toymaker came into the year after a winning fourth quarter full of Disney licensing success, and it's been trying to transition from the legacy brands that have defined it for decades to a more digitally focused platform. That progress has been thwarted by COVID-19, and the 2020 first quarter showed a dismal 30% sales decrease that was worse than rival Mattel's (NASDAQ:MAT) 15% decrease.

But the pandemic will (hopefully) eventually end, and Hasbro will get back on track. Let's take a look at where that track is going. 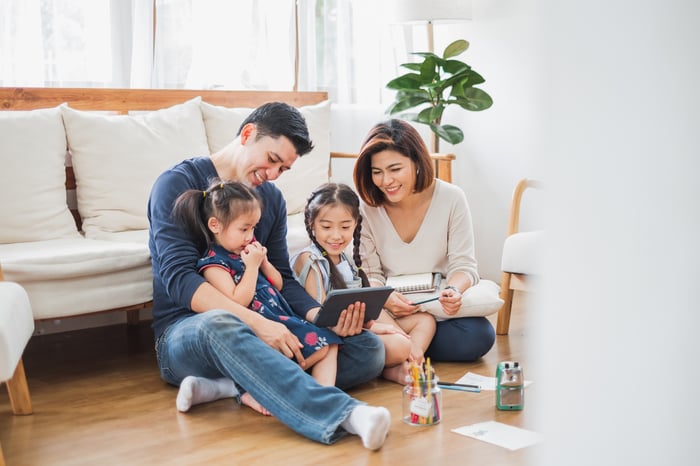 Keeping up with technology

Hasbro's been around for almost a century, and during that time it has created or purchased some of the most well-loved toy and game brands in the country, including Mr. Potato Head, My Little Pony, and Monopoly. While these (and many others) are always in demand, the gaming industry has been headed toward digital, and Hasbro has realized that if it wants to stay in the game (pun intended), it needs to head in that direction.

To that end, it recently bought Entertainment One (eOne), the company that created Peppa Pig and PJ Masks, and that has opened up a whole new branch of its business. With the move toward multi-channel experiences, Hasbro is defining itself as a company focused on innovation.

The company has what it calls its three growth pillars: Consumer products, video games, and entertainment, which is led by eOne. But these categories are comprised of a number of broad sections, including experiences, publishing, music, TV programming, digital gaming, and more. eOne's purchase, which set the company's loss back in the second quarter due to the completion of the deal, has the benefit of more greatly diversifying the company's business in the content and creation segment and bringing it up to speed in the current gaming environment.

eOne is working on developing over 100 films and 60 TV projects under various names. In the first quarter, for example, it launched Alien TV for Netflix, and it's working on a My Little Pony feature film for release in 2021.

The content is equally important because it provides cross-collaboration for the consumer products division, and the two work together to bring in higher revenue. Hasbro is also expecting to see $130 million cost synergies from the collaborations by 2022.

Making it through a rough spot

While it might be expected that stay-at-home orders would be a boon for a board game company, the pandemic that caused it also caused logistics trouble. Hasbro did in fact see growth during the second quarter in legacy games such as Jenga, Connect 4, Battleship, and Mousetrap, and gaming was the only segment that gained in the second quarter, by 11%. Hasbro had challenges with distribution channels during the quarter, and it also received a blow from store closures. During the second quarter, Hasbro saw particular competition from online gaming companies such as Activision Blizzard and Electronic Arts, which both don't need to rely on storefronts and had gains during the pandemic.

Hasbro also has the license for several Disney brands, including Frozen and Star Wars, which is a strong part of the company's business. This was true even during the pandemic, riding on the success of Disney+. On the flip side of that, Universal's newest Trolls release was delayed, which cut into Hasbro's licensed product sales.

Hasbro ended the first quarter with more than $1 billion in cash, so the company is in a great position to keep going forward.

An opportunity for investors

Shares of Hasbro are down 25% year to date, even though they've rebounded from their 2020 low of $44, a 58% drop. The forward one-year price-to-earnings ratio is a reasonable 18, which means investors can purchase shares at a discount, especially if there's high potential for growth in the coming years.

I think that Hasbro has a lot in store for the future, and it's going through some growing pains right now, on top of the economic conditions that set it back during the pandemic. But once it's more firmly set on its path as an omni-channel, digital-first, and content-heavy company, it will prove to be a solid choice for an investment.

Where Will Hasbro Be in 5 Years? @themotleyfool #stocks $HAS $EA $NFLX $DIS $MAT $ATVI Next Article
Current