These promising tech companies could power your portfolio through the next decade and beyond.

If you're looking for stocks that can deliver explosive growth, there's no better starting place than the tech sector. Technology stocks have powered the market's recovery this year, and the fact that the sector plays host to many companies with highly scalable businesses and products that drive performance across industries points to big growth opportunities in the decades to come.

To get a survey of tech companies that could be among tomorrow's big success stories, we asked three Motley Fool contributors to profile one of their top growth picks. Read on to see why they identified Glu Mobile (GLUU), Shopify (SHOP -0.78%), and Qualcomm (QCOM -0.91%) as stocks that have what it takes to deliver market-crushing returns. 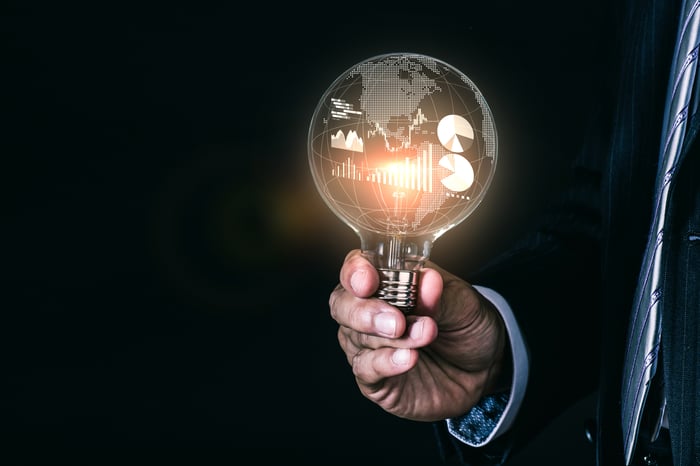 Buy the dip on this potentially explosive video game company

Keith Noonan (Glu Mobile): The market for interactive entertainment has never been hotter, but investors quickly cooled on Glu Mobile stock after the company published its second-quarter results earlier this month. The company's share price has dipped roughly 21% following the earnings report, with misses on top and bottom line results and release pipeline news that was admittedly less-than-thrilling.

Management announced during the Q2 call that it was shifting resources from one of its in-development titles to focus on boosting engagement for one of its legacy games -- indicating a potential loss of confidence in the newer project. Glu also announced that a game previously planned for release this year would be pushed to 2021 to give it more development time.

On the other hand, second-quarter performance was actually pretty encouraging on many fronts. Revenue fell short of the market's target but still grew 40% year over year in the quarter, and bookings in the period came in well ahead of expectations -- increasing 79% to reach $182 million. Growth is expected to be significantly lower in the third quarter, but bookings are still projected to come in at a record level for the period, and the stock's recent sell-off presents an attractive entry point for patient investors.

Glu now has a market cap of roughly $1.3 billion and trades at just 21.5 times this year's expected earnings -- a valuation that leaves huge room for growth. Investors will admittedly have to embrace some uncertainty with this one, but I think the stock's risk-to-reward dynamic looks favorable and I'll be buying shares in the near future.

Mordor Intelligence estimates that annual gaming industry revenue will have expanded from roughly $151.6 billion in 2019 to reach approximately $257 billion in 2025. Glu has the benefit of a large and fast-growing market on its side. Billions of people around the world already own mobile platforms capable of running the company's titles, and the number of players increases every day and will likely continue to do so throughout the next decade and beyond.

Glu still has titles in its near-term release pipeline that can be difference makers. With industry tailwinds at its back, a solid lineup of core franchises, and the possibility that a hit new game could send sales and earnings skyrocketing, there's a lot to like about the stock at current prices.

Joe Tenebruso (Shopify): The coronavirus pandemic is accelerating the growth of e-commerce around the world. People who have never shopped online before are turning to e-commerce sites to buy the goods they need. Businesses, many of which were forced to close their traditional retail stores during the COVID-19 crisis, are migrating their operations to the internet as fast as they can to survive. Having an online presence has never been more important -- and Shopify is helping companies adapt to this new post-pandemic world.

Shopify serves as an online retail operating system. For as little as $9 per month, companies can add the ability for people to purchase products from their existing website. For $29 per month, you can build a fully functioning online store. Additional features include payment processing, shipping, and business financing, among others. Shopify's plans allow its customers to scale their operations as they grow, all the way up to its $2,000+ per month Shopify Plus solution, which is used by massive corporations like Heinz and Hasbro. In all, more than 1 million businesses use Shopify to power their online operations.

Thanks in part to the coronavirus-driven trend toward e-commerce, Shopify is growing at a torrid rate. New store creations surged 71% in the second quarter. Better still, Shopify's gross merchandise volume -- essentially, the total dollar amount of sales businesses made on its platform -- rocketed 119% higher, to $30.1 billion. Shopify's revenue in turn soared 97% to $714.3 million, and its adjusted earnings per share rose more than 10-fold, to $1.05.

Best of all, with the global retail e-commerce market set to grow to more than $6.5 trillion by 2023, up from $3.5 trillion in 2019, according to Statista, Shopify has long runways for growth still ahead. Thus, investors who buy shares today should be well-rewarded in the decade ahead.

Connect with the 5G upgrade cycle

Will Healy (Qualcomm): As the dominant maker of smartphone chipsets, Qualcomm will probably benefit as billions of consumers upgrade to 5G devices. So powerful is this upgrade cycle that Research and Markets predicted a compound annual growth rate of 87.8% through 2025!

At least as things stand now, Qualcomm is able to reap significant benefits. As a result of this power, many of its long-standing issues have disappeared.

Apple (AAPL -0.34%) settled its long-standing legal disputes with the company early last year. Also, an appeals court recently overturned the decision that Qualcomm abused its monopoly power. Thus, the company will not have to dismantle the business model on which it built its modem business.

Furthermore, even before the ruling, Qualcomm stock had begun to recover from the sell-off earlier this year. Despite its earnings per share falling by almost 58% from year-ago levels, Qualcomm stock shot higher following its third-quarter earnings release, and the court decision gave it an additional bump. It has risen by almost 25% year to date.

Qualcomm stock is also reasonably priced considering its potential. It currently trades at a forward P/E ratio of approximately 19.0. Moreover, even with the slowdown, analysts forecast earnings growth of nearly 11% for this year.

That could improve significantly in fiscal 2021. At that time, Wall Street analysts expect a profit increase of almost 63% as the 5G upgrade cycle begins in earnest.

Admittedly, Qualcomm will probably face challenges to its monopoly. UNISOC, Huawei, Samsung, and MediaTek compete in some parts of the chipset market. Also, Apple paid about $1 billion to acquire Intel's (INTC -1.41%) smartphone modem business last year, presumably to reduce or end its dependence on Qualcomm.

Nonetheless, with the massive growth the upgrade cycle will bring, Qualcomm stock should see massive benefits, regardless of how well its peers perform.