Please ensure Javascript is enabled for purposes of website accessibility
Log In Help Join The Motley Fool
Free Article Join Over 1 Million Premium Members And Get More In-Depth Stock Guidance and Research
By Bradley Freeman - Aug 17, 2020 at 9:08AM

These two companies are poised for long-term success, and they can boost your college savings in the process.

Saving enough to send your kids to college has been a struggle for years. In just the past decade, the cost of a degree has increased over 25% to approximately $49,000 and $21,000 at private and public colleges, respectively.

For parents, patiently investing in high-quality stocks -- especially when your kids are younger and time is on your side -- is a powerful tool for saving money to cover such a major expense.

Here are two stocks that should deliver long-term profits and help pay those expensive tuition bills. 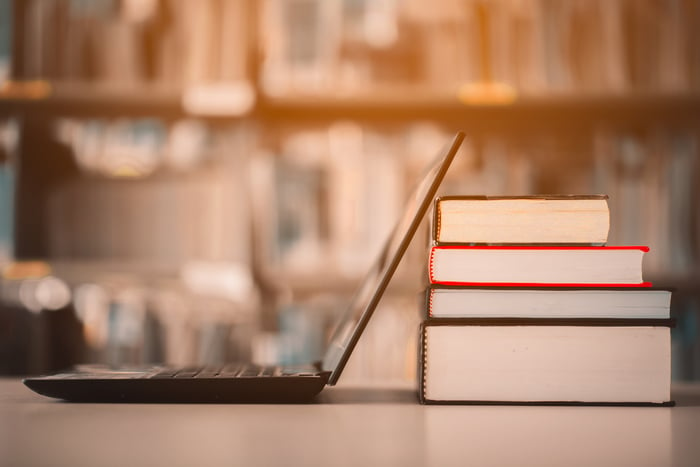 Planet Fitness (PLNT 0.54%) has certainly been challenged by the coronavirus pandemic, but this gym chain is as poised as any to recover. Importantly, the company owns less than 25% of its locations. The remaining stores are owned by franchisees paying periodic licensing fees to Planet Fitness, and these franchisees are typically not individual store owners.

Instead, they're predominantly deep-pocketed operations owning an average of 20 locations across multiple states. This geographic diversity is especially ideal in the current environment of unpredictable virus outbreaks, and franchisees have been remarkably capable of enduring COVID-19 challenges thus far. On the most recent earnings call, CEO Chris Rondeau noted that the offer of financial assistance to Planet Fitness franchisees often went unclaimed, showcasing the durability of its business.

Rondeau frequently discusses -- on calls and in interviews -- how the company's asset-light business model and industry-low costs enabled it to take market share during the Great Recession, while competitors struggled and went belly up. Thanks to those same strengths, management has consistently expressed confidence that Planet Fitness will again take share in the long term. Rondeau went even further in this latest report, alluding to new real estate opportunities allowing Planet Fitness to potentially speed up its ultimate plan to expand from just over 2,000 locations today to 4,000 total. That would be a solid recipe for growth and profits in this franchise-focused business model.

Rondeau even added about $4 million in Planet Fitness shares to his personal portfolio in March, signaling his faith in the company's future. When company leadership is willing to put money into the business, it's an encouraging sign for the company's long-term prospects.

Facebook (META -0.11%) is one of the most consistent and impressive large-cap growth stories in public markets. Its track record of expansion and operating leverage has powered the company's financial results and stock appreciation.

The company trades for 31 times forward earnings, which are expected to come in at $10.11 per share for 2021. That would represent more than 25% earnings growth from the $8.01 expected for this year, making that multiple still attractive.

In terms of revenue, from 2014 to 2019, Facebook grew sales from $12.5 billion to $70.7 billion --good for a compound annual growth rate (CAGR) of 41%. Such rapid growth cannot continue forever, but the company's top line is still expected to increase 24% next year after relatively modest growth of 13% in 2020 due to pandemic-related declines in advertising spending.

For the second quarter, Facebook's business held up remarkably well. Even amid COVID-19 -- and perhaps partially because of it -- metrics such as user engagement growth actually ticked up. Daily active users (DAU) grew 12% year over year to 1.79 billion people, while monthly active users (MAU) also grew 12% to 2.70 billion people.

This compares with user growth of 8% for both metrics in the year-ago quarter. CEO Mark Zuckerberg has said the pandemic even created favorable tailwinds for his company by removing many in-person alternatives to socializing. For now, Facebook does not need to compete with clubs, bars, or live sporting events taking eyeballs away from its platforms.

Beyond the group of apps Facebook currently operates, the organization has other projects that could turn into sizable new revenue streams in the not-too-distant future. The new Facebook Shops is a platform that allows business owners to make an e-commerce page for free on both Facebook and Instagram to sell their products.

It's partnering with e-commerce platforms like Shopify to support business owners. Facebook will charge transaction fees and continue to leverage its billions of users for marketing. Deutsche Bank believes this could be a $30 billion revenue opportunity. That would represent 40% of its trailing 12-month sales.

This endeavor could not have come at a better time. With shutdowns and social distancing still prevalent across the world, Facebook Shops is a timely resource for small business owners needing to quickly shift their focus to e-commerce.

Saving for your kids' college education may seem like a monumental task, but investing early can work wonders, especially when picking strong companies like Planet Fitness and Facebook that are positioned for long-term success.