The shift from dense metropolitan cities to the outlying burbs is happening. Let's spot the winners for your portfolio.

Don't look now, but the suburbs are cool again. After decades of urbanization -- with folks leaving rural areas for metropolitan hotbeds -- we're now seeing an exodus of young people in major cities into the outlying suburban areas. Welcome to suburbanization.

The pandemic changes everything. Big city offices are encouraging their staff to work from home, and that means there's no need to keep paying stiff metropolitan rents. Social distancing also makes it less appealing to live so close to your neighbors, and let's not get started on the perils of cramped high-rise elevators. The allure of a single-family home in the suburbs -- one with space for a Zoom room -- is everything right now.

Unlike de-urbanization or counterurbanization, where city dwellers return to rural turf, the new suburbanization movement finds folks staying reasonably close to the metropolitan buzz but in a quieter and more spaced-out setting. There's money to be made whenever consumer tastes shift, and that's where Invitation Homes (INVH 1.74%), Trex (TREX 5.62%), Uber (UBER 1.70%), Peloton (PTON 0.49%), and Lemonade (LMND 6.04%) show up to your portfolio's housewarming party. 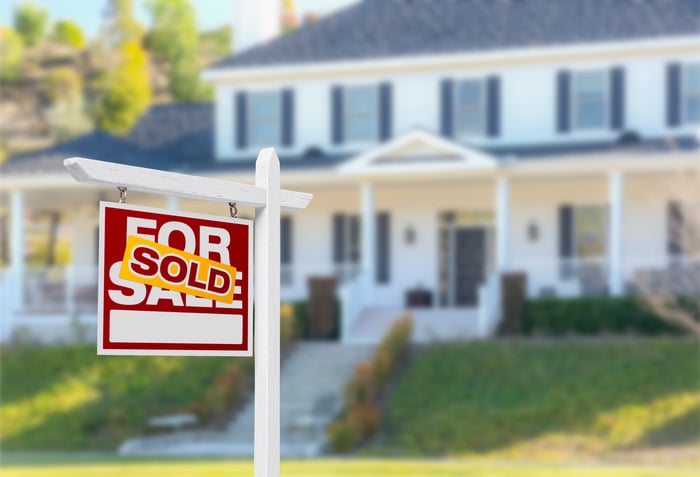 I discussed Invitation Homes in a broader piece last week on three trends that could define 2021, so let's start this piece by bringing it back. Invitation Homes targets suburban markets with compelling demographics -- good schools, near major employment centers, and with solid transportation corridors -- and then it buys as many as 5,000 single-family homes. It then leases out its properties.

There's a scalability advantage here, and Invitation Homes had 79,256 homes in its portfolio at the end of June. You may have heard about deadbeat renters these days, but Invitation Homes is doing a good job keeping its homes filled and its tenants paying. Last month, occupancy levels hit a record high 98%, and 98% is also the amount of rent it's been collecting the past couple of months relative to its historical average. Invitation Homes isn't a high-growth story, but it does pay out a decent 2.1% dividend.

Moving from a luxury studio or one-bedroom apartment to a single-family home opens up a lot of new space -- and we're not just talking about additional rooms and square feet inside the new digs. There are front porches and/or backyards in play in the suburbs. Trex is the leading player in wood-alternative decking. Its eco-friendly decks aren't as cheap as wood, but they last longer and are easier to maintain.

You know that demand is strong for Trex when in its latest quarter -- when everyone was hunkering down through April, May, and June -- consolidated net sales rose 7%. Analysts were bracing for a decline. Guidance calls for growth to accelerate to 13% for the current quarter.

The leading ride-hailing service may seem like an odd fit in the suburbs, but let's connect the dots. One may think that owning a car is a necessity in the suburbs, making an Uber less necessary. However, that's not always the case, and the suburbs don't have the detailed mass transit systems of the big cities.

Folks also need to eat in the suburbs. When it's time to eat in a major metropolitan city, there are countless eateries within a couple of blocks. If you're looking for takeout in the suburbs, it will be probably a third-party delivery app like Uber Eats saving the day -- and your dinner table. Uber Eats has become a big part of the story in the pandemic, with segment revenue more than doubling in its latest quarter to help offset the sharp slide in Uber's flagship personal mobility service.

High-rise dwellings often have gyms, and if they don't, there's no shortage of fitness centers and boutique spinning classes available within walking distance. Life's different in the suburbs, even if some single-family homes are in communities with recreational centers and other fitness features.

Peloton is going to be a popular purchase for folks moving out to the suburbs but still wanting to stay in shape. Its stationary bikes and treadmills aren't cheap, but the monthly subscriptions are a lot less than big-city gym memberships for a family. Peloton's business has accelerated through the coronavirus crisis, with more people swearing off traditional gym workouts. Peloton's going to like the suburbanization of the country.

Let's wrap this list up with a tall, refreshing glass of a recent IPO. Lemonade is disrupting the property insurance industry, and it turned heads in last month's market debut. Lemonade's primary product is renter and homeowner insurance, and it uses a high-tech platform that can square away a quote and even tackle many claims without ever having to break away from its artificial-intelligence chatbot.

Lemonade has proved magnetic to young customers who don't typically deal with insurance. A whopping 70% of its accounts are 35 or younger, and its customer base has nearly doubled to 729,325 over the past year. There's a big reason Lemonade is making the cut. A young couple or family may not think twice about insuring an apartment for its contents, but it's a different story when mortgage companies require it for the purchase of a home. Lemonade is seeing a growing percentage of customers trade up from renter policies to homeowner coverage, and that's good news for Lemonade. It charges an average of $150 a year for renter plans, but that pops sixfold to $900 for homeowner policies.